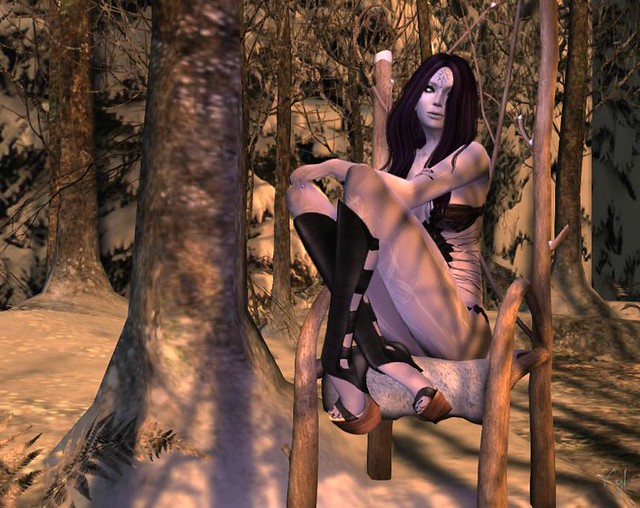 Eirwen took the throne as the first flakes of snow formed and fell from clouds high above. The court moved with the seasons drifting through the air, shining lights in mist dew and frost. The Seelie court prized beauty above all things; in action and thought as well as appearance. She had long been known for her good deeds; her love of others had led her to intervene in the affairs of mortals, protecting and defending while frost was on the ground. Seasons and tastes changed even among the nobility of the court, and this year she was the ideal, the one all others wished to emulate, in look as well as deed. 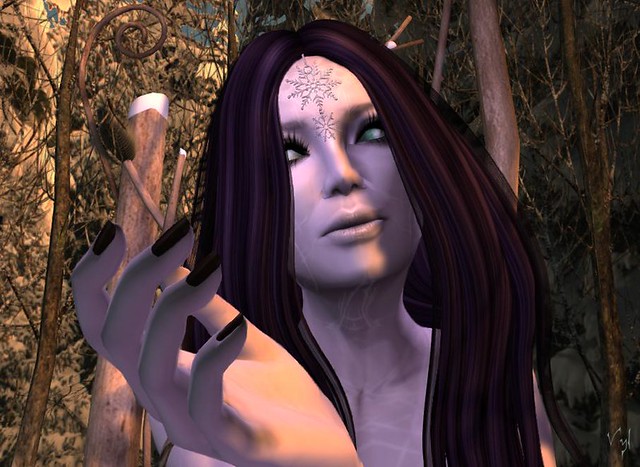 The court, as fickle as they could be in their personal whims and fancies, maintained their core beliefs through the years. None could live with dishonour, and glory was a goal worth chasing. Eirwen had encountered the Unseelie before, their malevolence and trickery bringing all Sidhe into disrepute. As winter began to bite, their own court would be changing, new plans forming for disrupting and damaging, turning the world as ugly as themselves. This year it would fall to her to lead the Seelie court against them. In times past this had been left to warriors and knights, those males and females determined to prove their worth, their beauty enhanced by the blood on their blades. Not this time. She would be in winter's vanguard, falling into the chaos, balanced on each unique snowflake wit at the ready, and blade in hand.
The throne would stand empty until victory was won. 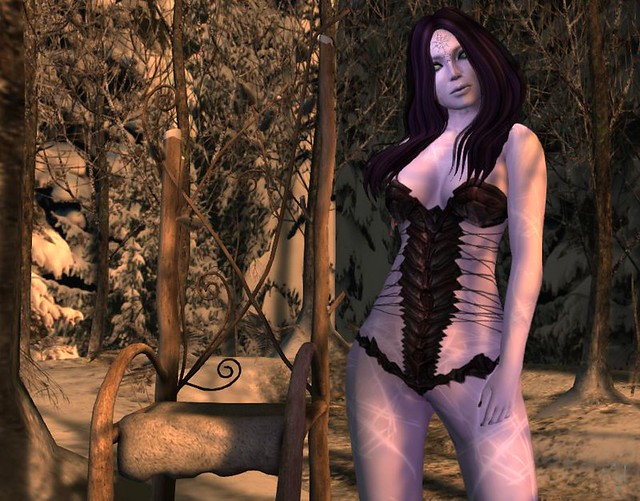 Totally Top Shelf is a bi monthly themed shopping event featuring great creators in SL. This round is themed around the Winter Seelie and Unseelie court. There's items for many tastes here, from skins and clothing to furniture and rideables in a beautiful winter setting. The event runs from Dec 1st - 24th.

Hair : [Entwined] Titania - Blacks  L$ 200
Contains two versions - normal, shown here, and one to fit around your Lolas. Five tones are possible via a HUD.
Skin : Genesis_Lab_Frozen_Skin_GIFT
Beautiful pale lilac skin, a wonderful gift from Genesis Lab. This gift comes with appliers for SLink hands and feet, Lolas and PhatAzz
Tiara : Bliensen + MaiTai - Smilla - Snowflake Tiara  L$ 199
Delicate snowflake design comes in three metallic shades, Ice shown here, box also includes Gold and Silver.
Eyes : Genesis_Lab_Frozen_eyes_Mint  - GIFT
Another wonderful gift from Genesis Lab. Mesh eyes, six colours included.
Tattoo : Munereia - Iced Redundancy - 35%  L$ 50
Lovely tattoo reminiscent of the northern lights, or ice striations on a window. Included in the pack are tattoos at four levels of intensity, 35, 50, 75 and 100% Here shown is the white version, also included is the same design in a silver metallic tone.
Outfit : Honey B's - .Krosis.Armor.Obsidian  L$ 220
This outfit blew me away at first sight. The textures and design are amazing. On opening the box - further amazement - it wasn't Mesh. I actually cant remember the last time I bought a current outfit which wasn't Mesh! (As friends who's IMs I wouldn't shut up about this in will attest.) Here, just the SL clothing layers are shown, but the box also contains appliers for just about any Mesh body part you might want to use.
Throne : {WishBringer} Winter Whismy  L$ 150
Beautiful natural chair / throne. Five male and four female poses, all suitable for unisex and all adjustable by the menu.