Doing my hair while jumping from feet to feet to avoid touching the ground for too long. Unfortunatly this behaviour lets people think that i need to hurry to toilet. But going on a toilet on a place where i even don`t want to touch the ground? 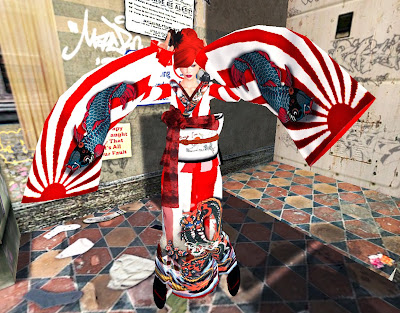 Here a front picture of the kimono. I love the mix of the rising sun flag with the traditional japanese paintings. 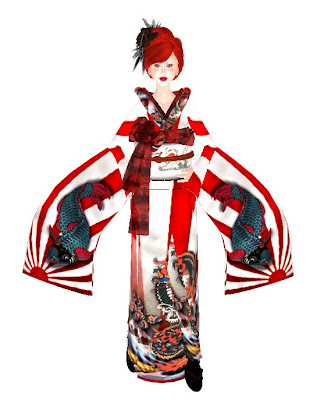 Here you could see that even this wonderful wave painting got used in the kimono. 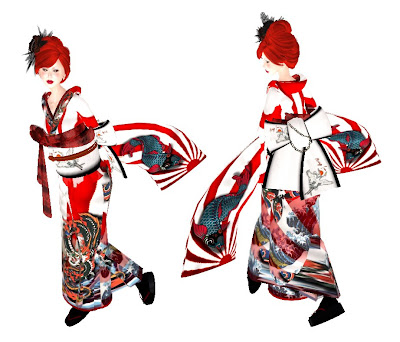 Email ThisBlogThis!Share to TwitterShare to FacebookShare to Pinterest
Labels: A.M.K.R.

Writing stories for blogging items takes much time. So i decided to be rather lazy and show just some freebies. Some might have been allready shown on bunches of other sides but i decided to ignore that simply.

Ducks are animals i somehow dislike. I like feeding them but then i try to throw the food as wide as i could so they have to swim a long distance. Or i try to feed only the outsider duck and chase the cool ones away. Philippe Shilova who built the nice hawk i blogged last week has now a duck with pond in his midnight mania. Both are low prim objects. The duck is rather wild and swims everywhere around. But in the pond its quite nice and behaves well.

Duck and Pond: Country of the kings of fantasy : duck 2- pack with pond

To be honest i have no clue how this jumper got into my inventory but it says groupgift from Trashy Girls In Style. So i went to the store and had a look at the subscriber and saw that it is still there in the history. It comes with a sheer and a non sheer top. The sheer top looks like wearing a bra under the top so all bits are covered. The hairdress is a freebie from A.M.K.R. 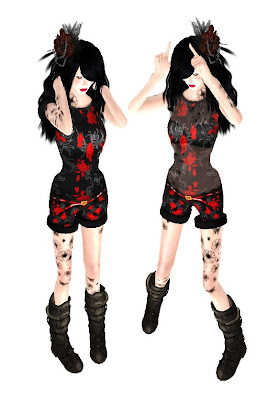 The red hair was a wonderful subscriber gift from clawtooth. The silverhair says that it is white hair but actually it is grey. I was rather glad when winning the left outfit. It is from NV and the midnight mania board didn`t lock for days. Thats a problem which doesen`t exist for the right top. Its from OoEas and those midnight mania boards normaly get locked. 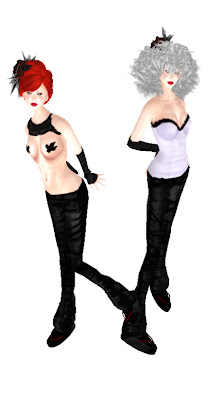 I also was rather keen on this cheeseburger dress. And i got it. I suppose its a dress which attracts many men so i better wear it only at home. Else everybody would want to nibble at me. So for my own protection i have a pirate with me. 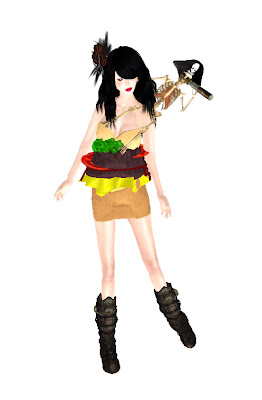 I nearly missed the Vitamen gift this month. Now im glad that i didn`t. The boxers are rather nice i like the colour and the fish are very friendly. The tattoo was a gift on a very cool lucky chair. Its a dancefloor and when your letter comes up you could jump on it and dance for some time. The dance is rather silly so its very funny. 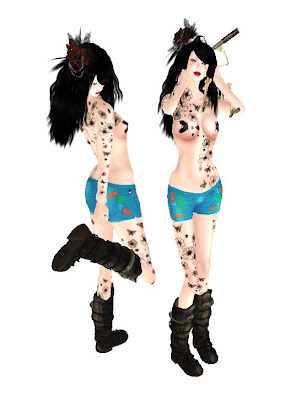 Searching in the sands of time

One day when i was sneaking around to find cookies i found a scroll. It contained strange words i did not understand them well but it seemed like they spoke about a hidden treasure. 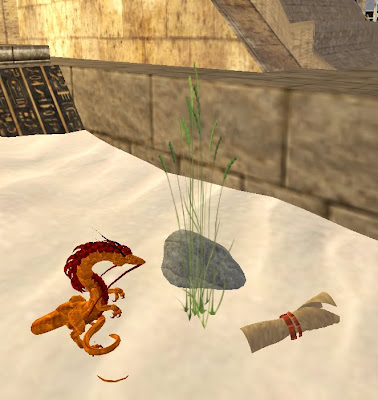 So i decided to look around and to search for the treasure. But first i got attracted by two rather comfy chairs. So i jumped onto the chairs and jumped down when somebody came because i was not sure if dragons are allowed to sit on those chairs. 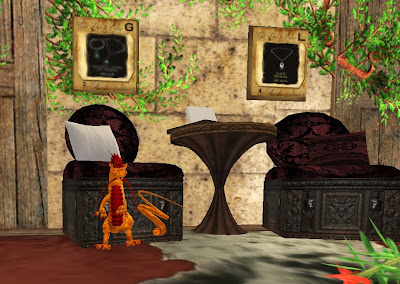 But then i decided to run out of the building. I met a friendly stonedragon. Stonedragons can`t move but they like to watch the humans he told me about a direction where i should search. 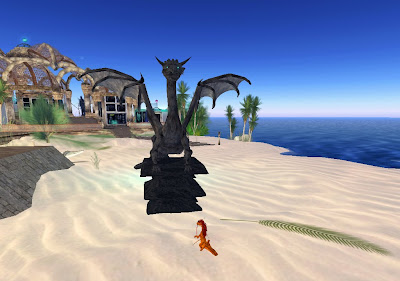 And he was right after some time of searching, scratching at the ground and drooling on things which looked droolable. When i drooled on a flagstone it disappeared suddenly and i fell onto an old grave. 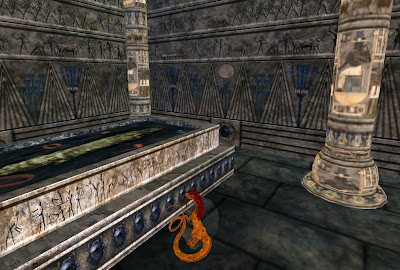 Being rather surprised i drooled onto the grave and i was standing in the treasure. 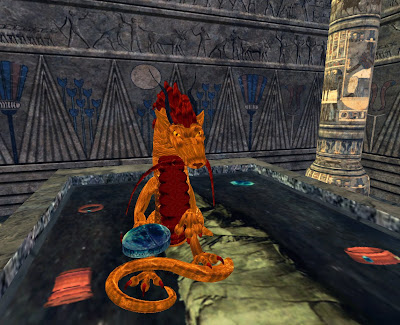 The treasure hunt at fallen gods inc. is fun. The sim is built rather well. And so are the sims around. Of course there is much more than a scarab gem in the treasure. It contains a tattoo and necklaces, a belt and some things which have been a bit for me as human. The items come in a version for women and one for men (the tattoo is unisex).

Akila Aman knew that she only had one job. 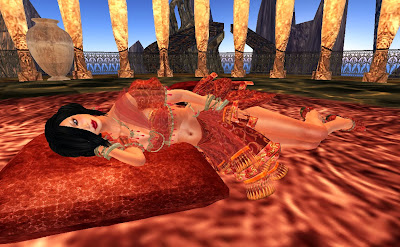 Being pretty. As she was a princess nobody dared to talk with her. So she spend all the time alone. Laying around. 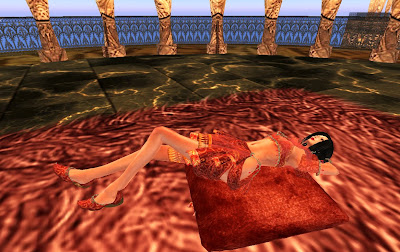 Sometimes she wondered if she was still pretty enough. She was pretty bored. 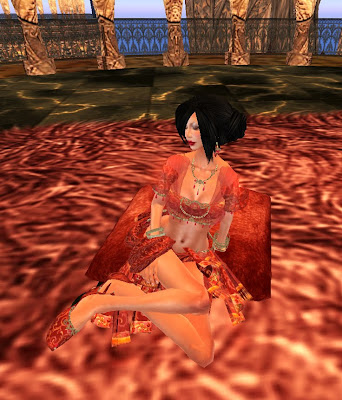 So one day she decided to go on adventure tour. She stood up and stretched herself. Before getting a bit more covering clothes. 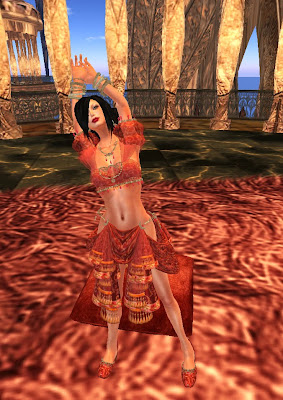 Hoping that nobody would recognize her when her face is hidden she took a veil. 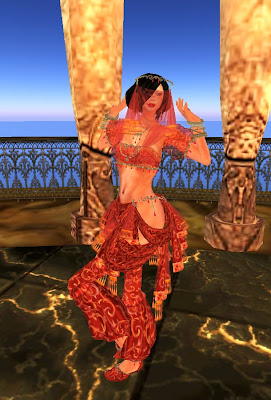 She was a bit insecure while speaking the magic words but it worked. Her carpet started to fly. 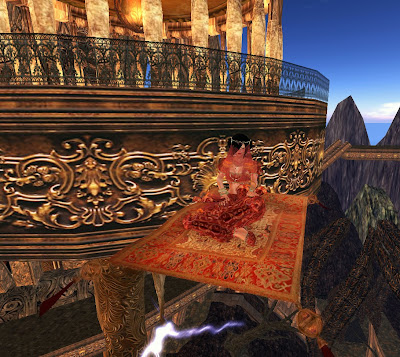 The Djinnie set from Caverna Obscura is great. As always it contains many pieces. And it comes with a shape which is modifiable. I first wanted to use that shape but then i thought i should have a try if i could make the prim parts of the outfit smaller. And it worked rather well. So this outfit also fits avatars which are a bit smaller. I like very much that the trousers are wearable as skirt, short trousers and long trousers. Also very nice is that the top still looks nice when only the system part is worn. Its possible to buy the parts also seperate. 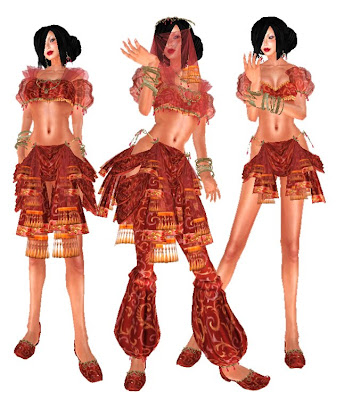 For the pictures with the carpet i used the flying carpet AO. Its well made as all the things from ## CI ## .

When being at Caverna Obscura i also spend some time at the lucky boards there. 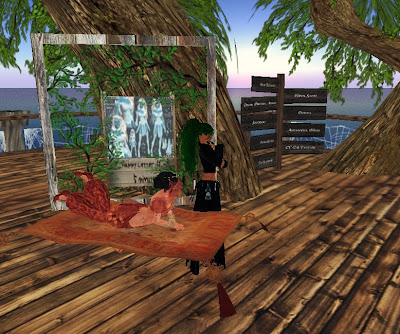 And i even won something. This great ice elemental avatar. It comes with skin and hair and two kinds of top. 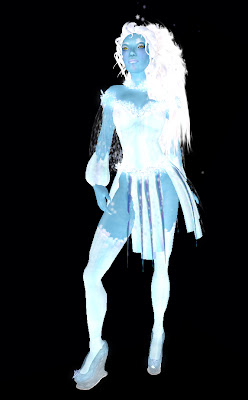 I love elephants. In my opinion they are very gentle and cute animals. So im quite excited about the fact that *FD POSES* sells now big cuddling elephants to sit on. And it made a drow smile. A female one even. 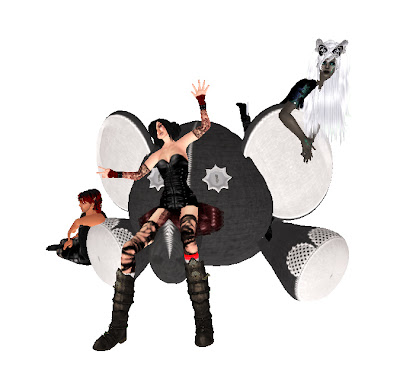 The elephants are available in three colours. Grey, blue and pink. They are all very cuddly. 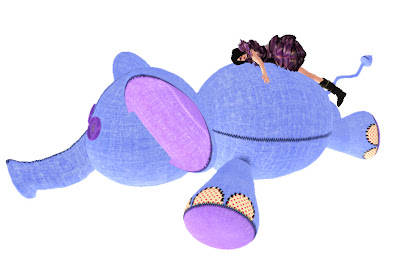 The eyes of the elephants depend on the colour. The pink one has love in the eyes. 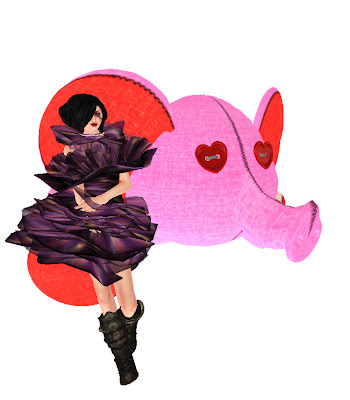 Each elephant has five sit possiblities. Here a picture of them. The one on the back is missing but shown in the picture with the blue elephant. 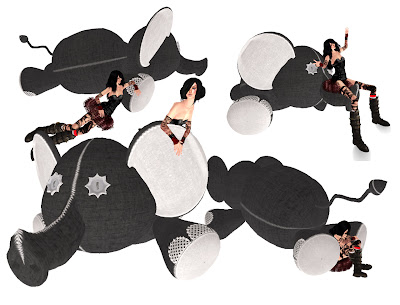 I these dresses in the blog:

Standing innocent with an hawk on my shoulder. This has a reason. The skirt is rather short and maybe people might try to look under it when i jump around.

With the long skirt this is less likely. But the hawk does not really like the jumping. So when i stoped it the top was a bit torn at the shoulder as the hawk digged his claws in the cloth of the top. 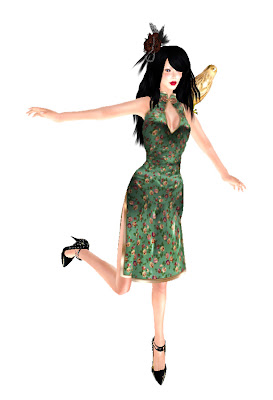 The hawk was a gift from a midnight mania board. It only has 3 prims. So its also possible to place the hawk in a tree or on a roof.

Dresses: +Lika Ruby+ china dress (Lucky chair - changes at monday all 5 minuts and after monday all 10 minuts)
Hawk: Country of the kings of fantasy : faucon_crecerelle (midnight mania - else 250 Linden)
Posted by Dagmar Haiku at 2:47 AM 0 comments

Email ThisBlogThis!Share to TwitterShare to FacebookShare to Pinterest
Labels: country of the kings of fantasy, hawk, Lika Ruby, philippe Shilova

She has been looking forward to the party now for two weeks. But her parents told her to wear decent traditional clothes. Learn to wear the kimono well they told her. So when seeing the rockabilly kimono she knew she had to use the chance. She sold her old books and with some money she had kept to buy a textbook about history she was able to buy the kimono. When her parents saw the kimono they didn t manage to say a word. She smirked and danced on all the way to the club. 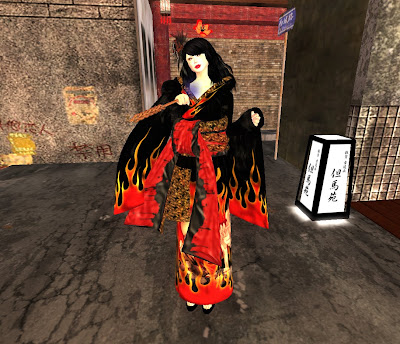 So here the wonderful rockabilly kimono. Its a prize on a lucky board. The black hair dress is a freebie from that shop. So what to say about the kimono. The idea is great, and the kimono is rather well made. I like it very much that the builder made two kind of obis. The obi is the belt around the waist. So she made a obi which comes with that shawl which goes over the shoulder (Eri). This is usefull as only one attatchment point is used. But in the set is also a version included where obi and eri are appart. 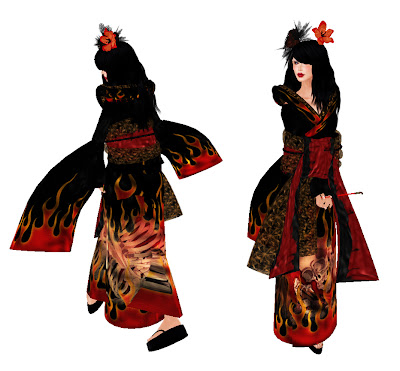