The Well was always there. Its sweet cool water was the source of life, and no inhabitant in Faireville had ever questioned the fact... until Lothoellan Flowerfields arrived. Nobody knew where she came from: one day she just walked into the marketplace, greeted the shoppers and vendors with a smile, then moved into a dilapidated cottage at the end of the lane leading to the pastures.
“How deep is the Well, exactly?” – Lothoellan asked the bystanders one day, while she was weighing a juicy apple in her hand at a stall in the market. Nobody knew the answer. Nobody ever tried to measure how deep The Well was, or find out how the water from it tasted.
Lothoellan laughed when she found out how ignorant the inhabitants of Faireville were. She quickly walked to The Well, dropped a small bronze coin into it, and waited for the splashing sound that meant the coin reached the water... only that there was no “splash”, not after a minute, not after five minutes, not even after an hour.
For many years thereafter the inhabitants of Faireville took turns in bringing food to the ragged beggar woman who never left the brim of The Well and was standing there day and night, leaning towards the depth, listening and murmuring, “Now how deep is this well, exactly...?”.

Fantasy Faire items:
Hair: “Umbreon” in Light Blondes by Analog Dog – 375 L$ for a fatpack. The Blondes/Reds and Browns/Blacks fatpacks are both a RFL donation item, so there’s no reason why you shouldn’t wear Queue Marlowe’s beautiful hairdo with the thick tresses during the Faire and thereafter! Queue’s shop is at The Hill, visit it, you won’t regret the trip.
Skin: “Opal” Black Brows by 7 Deadly S(K)ins – 299 L$. “Opal” is a beautiful pearly white skin that softly shimmers in the twilight... the ideal choice for the Fae Folk! You can choose from four packages with different eyebrow tones in the shop of Izara Zuta at San Mora, and they are also a RFL donation item, so again... your money is spent really well!
Tiara and bracelets: “Kira” by Bliensen + MaiTai – 399 L$ (tiara/crown), 150 L$ (bracelets). The “Kira” set is a delicate masterpiece... but which jewellery set created by Plurabelle Laszlo is not like this? You can buy these pretties at The Spirit Pool, and the bracelets are also a RFL donation item!
Dress: “Seasons Fae” Spring by Gypsy Wolf Creations – 275 L$. This pastel dress is so pretty that I would be quite happy to wear it in RL, too! In addition to being lovely it’s also a donation item, so visit Chaddul Ro quickly, and buy your own copy!
Wings: “Wings of Illusion” by Moondrops – 500 L$. This pair of softly fluttering jewel wings also has a HUD with several metal and wing colour options, a “must have” for the fashionable fae! You find Moondrops at Raven’s Perch, and you can be quite sure your money will be well spent because the wings are a RFL donation item.

The picture was taken at Luane’s Magical World, and I used one of the built-in animated poses of the “Blooming Spring” Fountain found there.
Posted by Ursula Floresby at 1:18 AM 0 comments

It was what you feared. It was what everyone feared; a fear so strong that, for the most part it was easier to ignore than anyone would have believed possible... You saw the look, brushed it aside. You saw it again, lingering and desperate to look away. A shuffle of papers, a tapping of keys, a hand gently laid on an arm. Words were nothing more than noise. A nod of the head, something decided, as you nodded along, unaware of anything agreed to. A life divided, into the before, and now suddenly, the after. Standing, walking, a door opening, when had any of this happened? That look again, softly knowing as it passed on the single folded sheet of shiny paper, light as a feather, yet heavy as lead. "You know dear..." words filtered like marbles through the cushion of cacophonous silence. "There's a choice to make..." 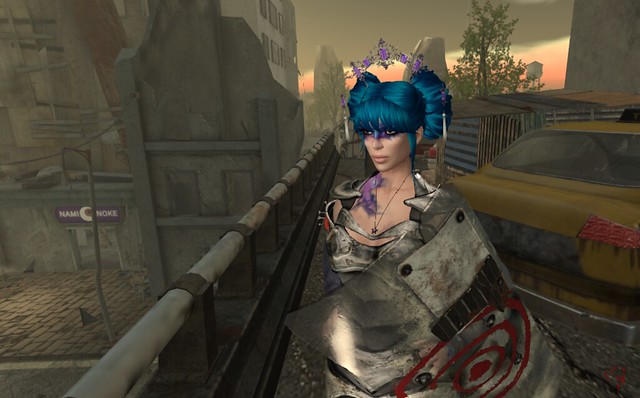 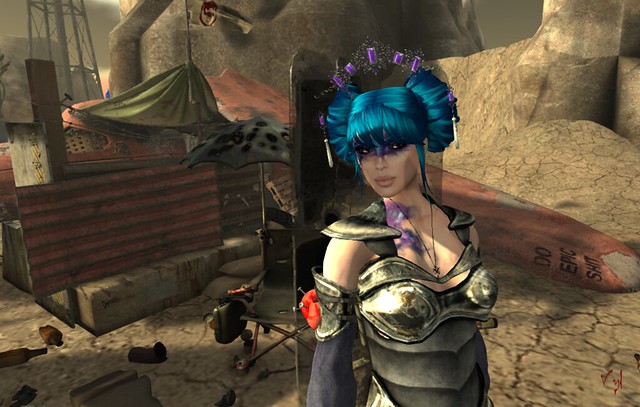 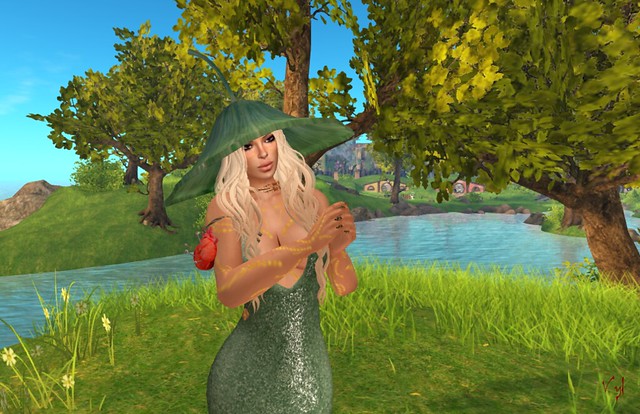 Through the haze of disbelief, and the fog of terror, something solid started to materialize. An implacable force, a cold and strong resilience, as unbending and firm as steel. A warmth, as adamant as the chill, something more numerous than the grains of sand on the sore, millions of hands reaching out, consoling, holding, comforting and driving you on.

"No..." A smile curled lips not having expected to turn upwards again. 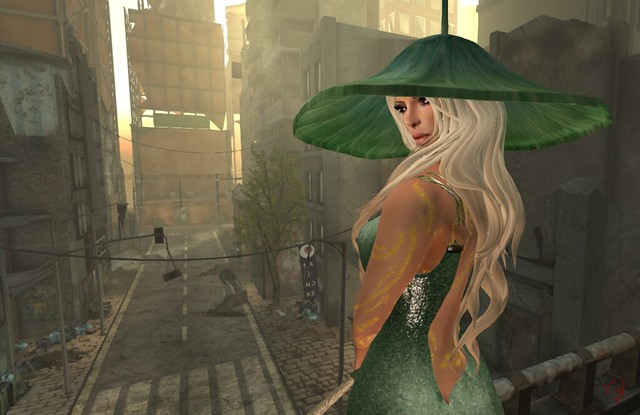 "Excuse me?" the softly caring shape replied, shuffling pamplets with nervous intensity.
"There's no choice to make. I will accept and reflect in the midst of this battle.
I will find fire and strength in the softness as well as the fight. 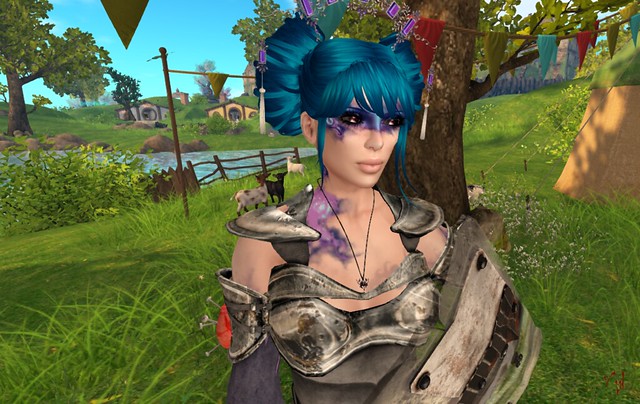 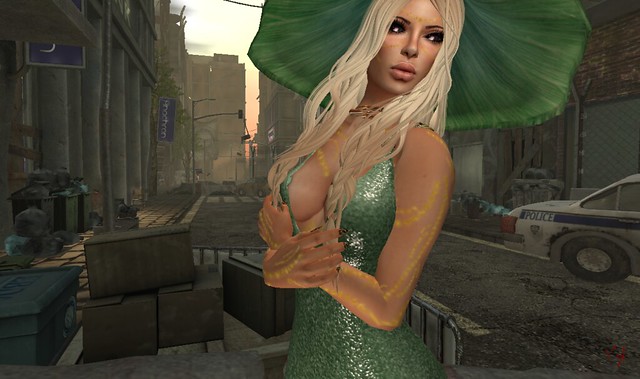 We are fighting. We are fighting right now. All around the world, those whose bodies turn against them, those who stand beside them, holding a hand, making a joke. Weeping silently for fear of pain and loss, at the unfairness of it all, at the world shattering potential for finality. Fighting. The scientists, nurses, doctors. Supporting and researching, caring and consoling, searching. Fighting. Individuals behind keyboards and monitors, logging on and spending an imaginary currency on pretty pixels, joining together around the globe to remember, celebrate and have fun. Fighting.

If you read this and feel something, know that support is out there for you. Know all of these people are fighting for you, and all those you care about. That it is ok to be soft, ok to scream and ok rail against the unfairness of this disease. If  you are too tired for the battle, find something beautiful and adore it. That's fighting, don't let anyone tell you any different. Let others pick up the increasingly powerful weapons we have, and fight for you. We will be here.

This is why I relay.

All items shown are sold at The Fantasy Faire to benefit RFL and the American Cancer Society. 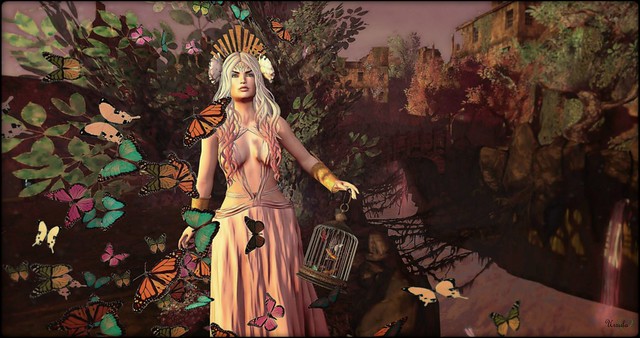 Fantasy Faire items:
Gown: “Oriana” in Pink by Belle Epoque - 199 L$. Janire Van Belle (“Janire Coba”, if you want to look her up) is a smart and original creator, and also a great person with a quirky sense of humour and a big heart. I’m showing you “Oriana” in powder pink, a refined and delicate gown designed so well that you can almost feel the light touch of silk on your RL skin. You have six more colours to pick from, and it’s a true bargain as Janire has included versions for every major brand of mesh bodies, in addition to the standard one. The “Belle Epoque” shop is at Raven’s Perch.
Headdress (with flowers): “Sabine Headpiece” by Belle Epoque, a special hunt gift for the Fantasy Faire. If you want to own this beautiful flowery head ornament, you must complete The Quest! Please read the details on the FantasyFaire homepage.
Hair: “Raven” in Lunar Ombre by Wasabi Pills – 250 L$. “Raven” is one of the two new hairstyles designed by MissAllSunday Lemon for the Faire, and if you buy the “Lunar Ombre” pack you can be certain you have selected your colours well, as 100% of the proceedings goes to RFL. The Wasabi Pills shop is at The Rose.

Other items:
Head: Catwa “Kimberly”.
Body: Maitreya “Lara”.
Pose: “Subtle 5” by HelaMiyo – 300 L$. The collection of five delicate and expressive “Subtle” poses (plus their mirrors) is a Pose Fair 2017 exclusive by Miyoko Magic. The fair is open until the 29th of April, so you have a few more days to visit and buy this elegant set. It’s quackalicious, Miyoko! :-)
Metal crown and bracers: “Revenge” by Luas (modified) – 100 L$. Ainara Luas shares a shop with Janire at the Fantasy Faire, so you can pay her a visit, too, at Raven’s Perch.
Butterflies cage: part of the “Lady Butterfly” outfit by Sweet Lies Design – 99 L$.
Butterflies: part of an avatar created by Piedra Lubitsch for MetaBody II. As Meiló Minotaur and CapCat Ragu are currently rebuilding the MetaBody sim, I’m afraid the beautiful (and) free avatars are not available any more.

The picture was taken at “Dawn’s Promise”, built by Sharni Azalee and Marcus Inkpen – a beautiful, beautiful dream of a sim at this year’s Fantasy Faire.

The story (without the credits) was also blogged at the Fantasy Faire homepage.
Posted by Ursula Floresby at 7:57 AM 0 comments