The mermaids sensed that one of them was in pain. They could always feel when there was some trouble with any of them... they were all sisters, after all, connected at various levels of existence. Now a beautiful, sparkling, slim creature was crouching in pain at the bottom of the sea. "Her prince left her. She gave up everything for him... and he just left her, for one of those pale, two-legged Earthlings..." - the eerie, soft mermaid voices shared the story, then they all gathered around their sister and slowly took turns in embracing her. She was one of them, and she was not to be left alone. 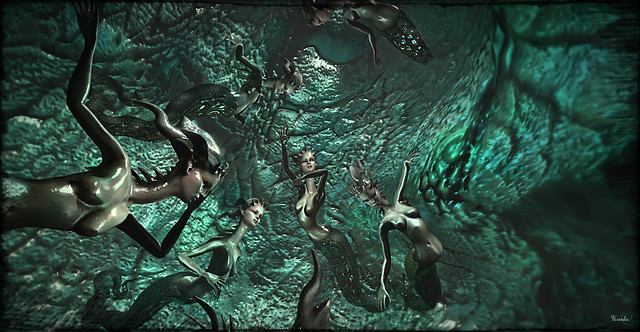 The beautiful mermaids are the "daughters" of claudia222 Jewell, who is one of the many excellent artists with an installation on show in the One Billion Rising in Second Life sims on 14 February 2015.

... and what is One Billion Rising about?

"One Billion Rising was the biggest mass action in human history. The campaign, launched on Valentine’s Day 2012, began as a call to action based on the staggering statistic that 1 in 3 women on the planet will be beaten or raped during her lifetime. With the world population at 7 billion, this adds up to more than one billion women and girls.
On 14 February 2013, people across the world came together to express their outrage, strike, dance, and RISE in defiance of the injustices women suffer, demanding an end at last to violence against women. On 14 February 2014 OBR called on women and men everywhere to harness their power and imagination to rise for justice. In 2015, OBR are calling for a revolution for change."

(Thank you for the excellent summary, Daniel Voyager!)
Posted by Ursula Floresby at 9:39 AM