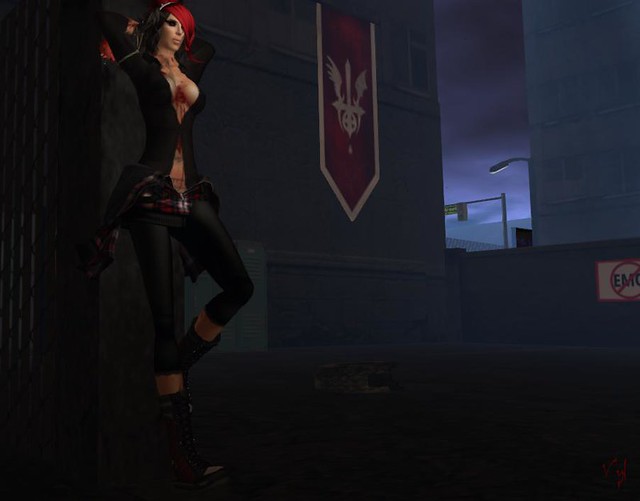 Vyl tilted her head, following the track of the departing ‘transformer’, slowly turning back to look at Mzzy, unusually chilled out for being in the city and looking a bit weird.. "How are ya darlin?" even her voice sounded slower and more measured than usual, almost warped by time in its lethargy.
Mzzy watched the thing clunk away and laughed gently nodding to Vyl, "I'm ok..." she paused looking around the city, a glimmer of sadness in her eyes, like a piece of her was missing but she still smiled, "Ya i'm good thank you Ancien." she chuckled turning the attention from herself, "Tell me a story Ancien... You look beautiful by the way."
Vyl’s forehead crinkled into a frown of confusion. Emotions and empathy were things from which she had gone to great lengths to remove herself, the sadness her friends eyes was something she noted as a difference from the norm, but could not relate to any further. She went with a change of topic, gesturing at the newly acquired marks on her face.. "Story... hrm... well, unlike Ab's first guess, it's not that I used too much fake tan.." she smiled softly, all her words and movements still languid.. "Just a little experiment gone awry... new mixtures I test on myself; no point endangering others, or letting them have all the fun..."
Mzzy chuckled hearing what Ab's guess was and shook her head, "Well you know I think it looks beautiful." she didn't want to pry on what the experiment was, especially not when they were in public either. "As long as your safe though Ancien?" it was a question, Mzzy cared for and protected those she loved and Vyl was one of them. Emotions ran high in Mzzy unlike a lot of vamps, but unlike her fellow empaths she could also control them easier the older she got.
Vyl nodded, a soft smile gradually curling her lips, exposing her fangs "Peachy keen.." for once the public space, the surrounding buildings and people werent giving her the usual tense baseline she always carried in the city.. "Just as soon as the intended effects of this little mixture wear off” she laughed slowly, “The unexpected sideeffects may also.." reaching up she tucked a strand of hair behind her ear, her eyes following the movement of her hand as though it was something alien.. "I do have other things.." she paused for a long while, continuing without seeming to have noticed she had skipped several beats "well tested things… just needing a final brush up. If you would be interested in helping me out?" 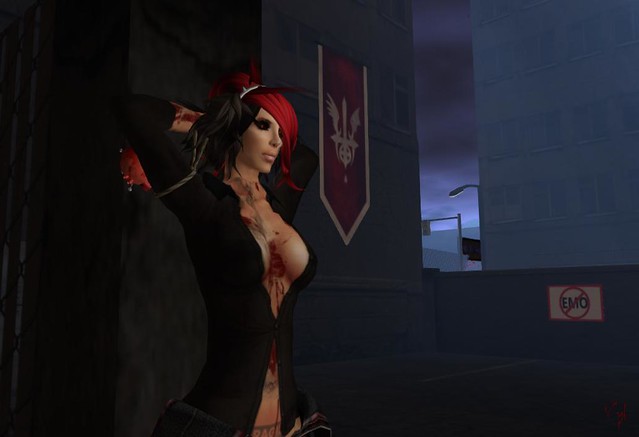 Mzzy smiled back at Vyl, the tips of her own fangs showing slightly as she noticed how unusually relaxed Vyl was. Not that it was a bad thing of course. She scratched the side of her head gently and pursed her lips and thought for a moment about Vyl's proposition. "Hmmm depends, am I going to grow a third arm or something Ancien?"
Vyl chuckled, reaching slowly to the book on the chain round her neck, easing the catch, and letting a small packet fall from it into her palm before securing the book again.. "Not a chance of it..." she murmured, her voice still oddly warped in time. "These are all old favourites, not new experiments.. I just need to see how people like ‘em nowadays..." she held out the small package, wrapped in thin leather and dangling from the strip of hide securing it. Swinging from side to side in her grip, movement through the air seemed unnaturally slow… "Interested?"
Mzzy watched Vyl's every move with great interest, but also cautiously. After a moment of watching the slow swinging motion of the small package she nodded gently, "ok... I'm in... but only because, well because I'm feeling lucky." she said and chuckled. "When do we start?"
Vyl 's grin slowly widened as she let go of the strip of hide. As soon as it left her grasp, the package fell at a normal speed for Mzzy to catch.. "Punk?" she chuckled again, "All the instructions are in the parcel, along with the samples to test... just do what you can.. and be sure to let me know how things go. It's a test after all, I need to know the results whatever happens.. ok?" 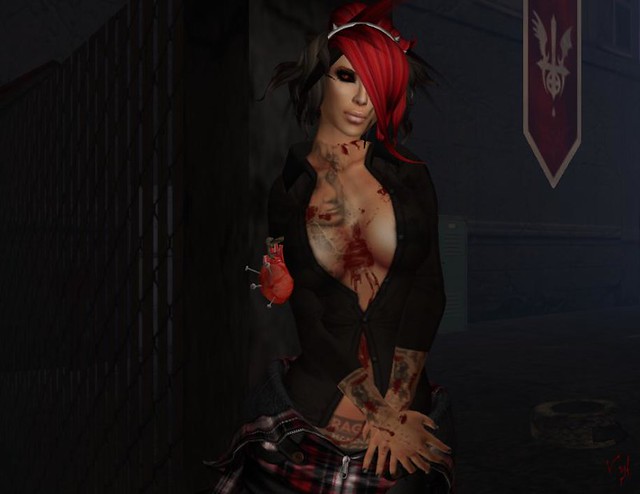 Mzzy chuckled, "Punk indeed" and reached out taking the little parcel. She opened it slowly, curiously peeking inside, counting three glass vials of some black glittering powder, then closed it just as fast and stuffed it in her backpack quickly nodding. "I guess I'll go home and read the instructions then see how I go. I'll be sure to write you a full report Ancien."
Vyl smiled and nodded, the movement exaggerated and slow; the effects of what she had taken as an experimental new mixture nights ago still held her in their grip.. "Try and let me know in person as well darlin... consider me a picky chef who likes to talk to the diners after their meal.."
Mzzy nodded, "Most certainly, I'll do both." she smiled then turned on her heels to head home, "Be ahh... safe Ancien, I'll report back to you in a couple of days." she frowned gently deep in though about what she was getting herself in to, but the emotional state Mzzy was in lately made her not really care and take risks willingly and easily.
Vyl languidly wiggled her fingers "Be well darlin.. and enjoy.." long after her friend had departed, she nodded in a slow movement toward the leather wrap she still saw before her, held in Mzzy’s hand "That was always one of my favourites..."

More year spanning RP here! Vyl's been running a sideline business from near enough the beginning, always willing to help out citizens of the City of Lost Angels with mind expanding concoctions (and poisons). Mzzy, one of the fabulous victims in the last RP posted still loves me enough after carving her up to intimidate J to try out some of my wares. This look and snippet of roleplay come to you from 2011.