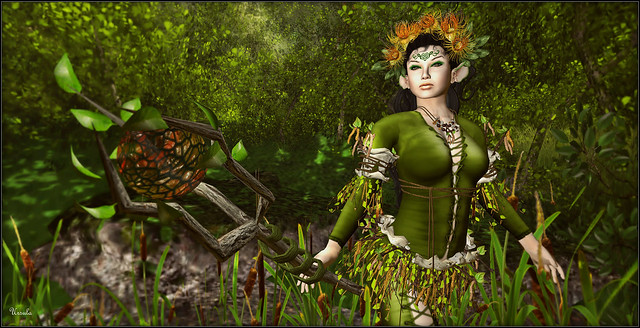 Laerornel Treesong eyed the suspicious bump protruding from the smooth and even forest floor. „Oh, those pesky moles!” – she thought - „They are up to no good again…” As Forest Guardian, she was supposed to keep the little parcel of ground in pretty neat order… no disorderly vines spreading their sneaky tendrils wherever they wanted to, no red poppies in the ocean of white flowers. The bump moved again, almost invisibly, yet it moved. Something green appeared among the soft clods of deep brown earth. It was not a mole. It was... a plant. It had something colourful, like a bud, on the stem that drilled through the earth with determination. “I should uproot this rebel!” – Laerornel Treesong murmured to herself; then she stood still for a while. “Maybe I’ll do it tomorrow. Maybe it is an unauthorised plant... but it might also happen that it’s utterly beautiful”. She tiptoed away from the newcomer in the forest, already looking forward to next day’s visit at the silent and peaceful patch among the trees.

Vixn, Charlie, thank you so much for your generosity! When I need something from you and I howl for help, you always oblige.


The picture was taken at one of the most beautiful fantasy sims I have ever seen in SL… The Lost Unicorn Gallery and unicorn sanctuary, lovingly kept by a charming elf in both lives, Natalie Montagne. I owe her many, many thanks because it is the Lost Unicorn Gallery where my fantasy pictures are on show inworld, together with the works of some of the best fantasy artists and photographers in Second Life. Thank you, Nat, again and again!
Posted by Ursula Floresby at 8:21 AM