Meridith was quite surprised when finding the diary of her aunt. Mel was away now for nearly 10 years and nobody knew where she went. Meridith found some pictures at the last pages of the diary with short notes on their backside.....

2nd Dec 2010 .. In winter lots of hungry beings come to my garden. Latly i saw a moose walking through the garden and turned away quickly to avoid that it sees me too. 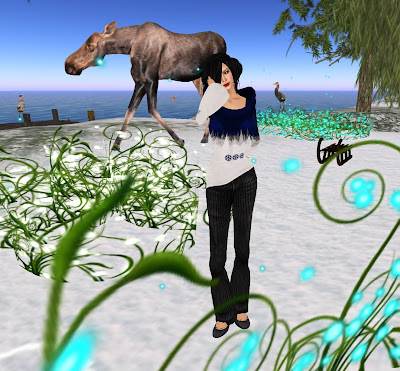 6th Dec 2010 Some days later i had a visitor which was even more strange. A white stag wearing a saddle and always poking my side like it wanted me to ride on it. I took that picture of me and the stag. I do not know yet if i should ride it or not. But i still wonder where it came from. I just had a look in the garden its nearly midnight and its still here i think i have no other choice than riding it. My life is boring anyways ... 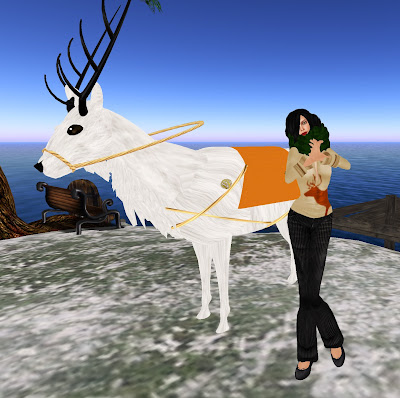 22769 have an adventcalendar. All clothes used for the picture will be gifts in it. The trousers are the gift today. I love the reindeer sweater. Its very graphic and at the same time it has a comfy look because of the way the material of the sweater looks. The collar of the blue sweater is great too. With that kind of collar a sweater just looks like being made for comfy evenings near a fireplace.