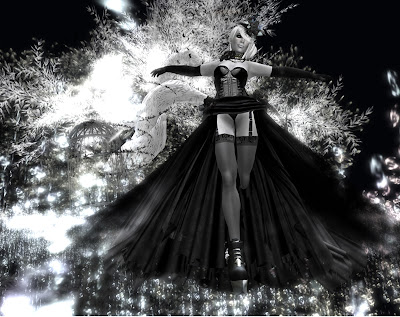 Today i'm inspired by the new released boots at Skifija, which have a very Gothic feel about them. Also i've been waiting for an opportunity to wear this amazing outfit from World's end which is a free group gift , also so is the hat, and if you must know the picture was also taken at worlds end which is a totally inspiring magical creation. A must visit place if you ask me , but now i'm giving away all my little secrets aren't I?
And so the secret was no more
the secret's secret was within
and out with became a treasure
a treasure to behold
Hair: L$179 Tuesday hair - B&W silver > Magika
Eyes: Free group gift -  Black doll > Les petits details
Outfit: Free group gift includes dress , gloves, stockings , chocker & shoes ( shoes not worn ) >  Worlds end
Boots: L$149 Iron will ankle boots ( or buy on the market place for L$99 ) > Skifija

Posted by Fauna Moonwall at 2:50 PM