But the work needed to be done and she had agreed to do it when starting to study the pathes of magic. Every evening she went into the cellar of her house to fight the chaos. Not to tidy up. She would have prefered it if she would have had to tidy her cellar. Her task was way more tricky. She somehow cleaned after working. With every spell she used to manipulate something like she wanted, she allowed the powers of chaos to float into the plane she lived in. So after having done her work she needed to take care that those powers would not manage to break free. While she was rushing through her cellar strange hands tried to catch her. But she was fast and she knew what to do. She did it now for nearly 300 years. Sometimes when people tried to sell her stuff, which she absolutly did not want, she sent them to her cellar. Normaly they became insane. Some disappeared completly. She supposed that they were not able to deal with the missing upper side of the cellar. But she was not sure about that. It also did not intrest her that much. She only wanted to do her work and nobody missed the glazed glass sales men. The black mage set from Ezura is hot. Somehow clothing which is not very warming often seems to be hot. This outfit is extremly hot even when wearing with the leggins with the cloth under the leather bands. It looks like being completly made of leather and it is possible to wear it in many ways. For example just with a leather thong or the thong and the leather bands. The bra is also made of leather. In the set are also pasties. The primparts come all with a resizescript. I like the idea of the coat which is open in the middle. It looks nice in that way. And of course its an outfit for a mage its not needed to be clothed warm when being able to use magic to keep yourself warm. The staff from the upper pictures is also a part of the set. The gem in the middle of it changes the colour and it glows. Its a very sexy set for roleplayers. 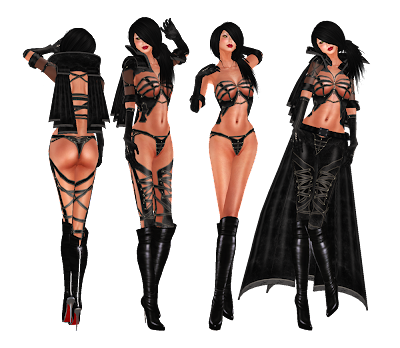