The young maid waiting for the big door to open. Today is her last day and after that she will marry her one true love. Its only that last day. Her apron is as white as fresh snow and the rest of her outfit is just tidy and nice. Unfortunatly she was so excited at that day that she had forgotten to hide her ears. So it was for all visible to which kin she belonged to. They never let her go again. Being one of the rare Tacticals she got forced to command troops. She was brilliant but the more battles she won the more she became distressed.

Im not sure if i have blogged this outfit before. But at the moment i use it a lot in roleplay as my char started to help in a store (she would never work). It a maid outfit and in my opinion rather well made. The apron is inbuild in the outfit so that it could be only worn like shown on the picture or without the headdress. I like that it is a maid outfit which does not look naughty at all. Often those are made on a way which fits more to fantasys than to using a featherduster. 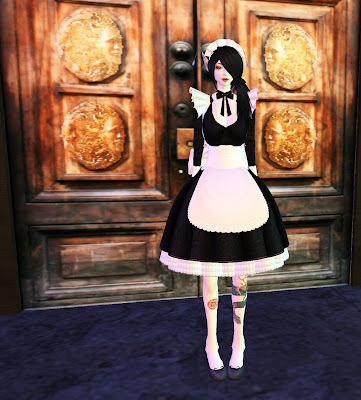