The Menstuff hunt is still up and running until the 3rd of September, (ladies and) gentlemen, so there is plenty of time left to finish it or at least grab some of the items that match your eclectic taste. One of the definitely unisex items you can find is the prize from A:S:S, a set of eyes from the Brilliance-series. They're mesh, but also come with regular system eyes, with a resize HUD and in the 5 versatile, natural colours you can see in the picture: blue, brown, green, hazel and grey.

The skin shown is a steal deal from The Mens Dept. -NIVARO- is offering the 'Crow' skin in springtone, and you'll receive 6 different versions with your purchase. One with full body hair, one with 'linehair' and a nummeh treasure trail, and a third that is completely hairless. All of these three come either with a hairbase or in bald. A great addition to your very own skin collection or your malt!

Yes... she'd taken her protein pills and put her helmet on...

This was no normal mission, no normal space agency. This was the 60s!  Bespectacled men packed into rows of consoles back at the rocket base had their ranks swollen by stylish female graduates. Some of the first of their kind, studying on par with the boys, maintaining their femininity and good looks all the while. Sophia was the first to join the cadets, those destined to pierce the firmament on a journey to the stars. No bulky spacesuit for her. The department had been flexible, as she offered to take the greatest risks, she got to have her say, in the science, and the stilettos. There was always the danger that Austin Powers would show up, and the launch would turn into a conga line.. but not this time.. as the countdown ticked to zero, she was up, and off into the darkness. 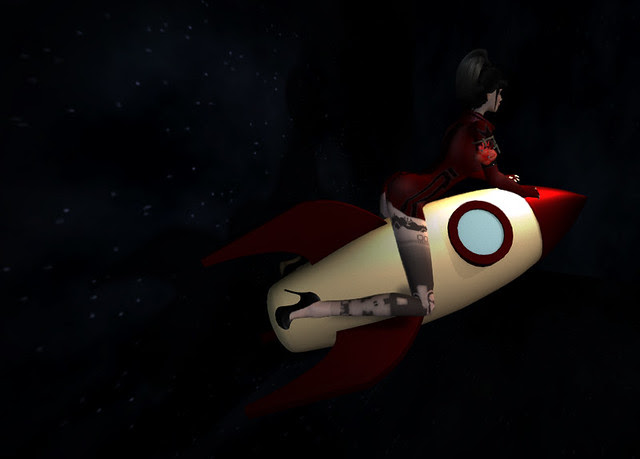 Tapping on the nosecone of the rocket, her message returned to earth, reverberating down the long string tying her to base. Through the vacuum of space, particles of dying star, of light and dark itself brushed passed her. But as her TV advertisement spots had shown the viewing public, the fabric of her suit was stain and particle resistant, and could be laundered at just 30 degrees! As the string behind her was payed out, and the reflected light of the earth faded behind her, she began to look around, searching the darkness, until.. making her kohl rimmed eyes flare open... the tap on the back of her helmet... 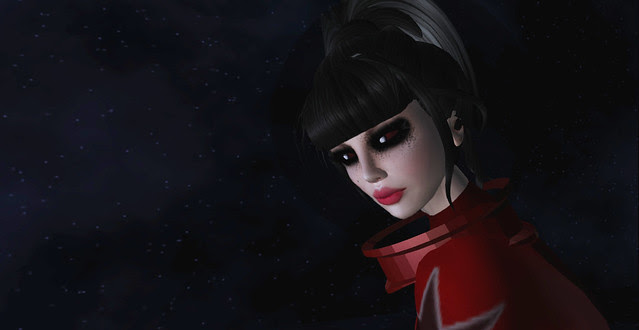 
The 60s were sexy, no doubt, as shown by this vintage space suit by [*RD*], available of course, at the Vintage Fair. You can just about see the globe of the helmet in the second image. There was no getting away from the Austin Powers silliness once that image got in my head of course, so going into space on the ride on rocket - a single pose free gift at the Vintage Fair from *~*HopScotch*~* is also available to buy, with more poses included. Here I've used the same eye makeup from Lovely Mi as in my last post, because I like it, and here you see it on a different skin. The spatter paint look of it is unusual to most makeups I've seen. The skin worn here is ::Modish:: Valena Fair, also a gift from the Vintage Fair. Its a sweet skin, almost porcelain in tone, with rosy pink lips. Could be ideal for doll joint tattoo layers! Those heels, I've been a big fan of N-Core heels for a long while, generally when buying any heels, having opted for the styles that include a foot. These don't and don't need to, as there's no warping of the foot which has put me off such styles in the past. The Vintage Fair runs until August 29.