The wind made slight sounds while blowing through the leaves. But there was an other sound, the soft sound of creaking old moss covered twigs. For a moment the sound stopped and a woodden hand reached out to pick up a leaf which had fallen into the water. The leaf was turned to the side and bathed in bright white light for a moment then it started to age quickly until only crumbs of soil rested on the bark. The sound of the slow steps started again. They moved over to a tree then the being started to collect seeds.
After a while it seemed to be satisfied with the loot and went on. It bent over and started to poke one of it's long fingers into the ground until the digged hole was big enough for one of the seeds. Apparently it was searching for a fitting spot to plant the just obtained seeds. With every seed it planted it seemed to move slower and also the light in the middle of it's body seemed to glow less bright. Until it completely stopped to move. For some moments it stood completely still then suddenly there was a movements. The toes grew until they started to root in the ground. The light inside the being started to glow again and life returned to it. Until it started to continue it's path through the forest taking care of the trees.
The Tinderlings from Cerridwen's Cauldron remind on golems made of wood, eventually driven by the sigil on their forhead. They are complete mesh avatars with the posibility to adjust some of their features, for example the colour of the sigil, their eyes and also of the light in their inside. They are materials ready and it is possible to choose between several kinds of textures for the eyes. The hud which is being used to make those changes also allows to form the hands to fists and to decide if the included particle effects should be used or not. The sounds of the Tinderlings is an other speciality of those avatars. When moving they sound like twigs hitting on each other in the wind and when chatting there is the sound of wind blowing through the forest. The Tinderlings will be available in three different versions: Forest Tinderlings, Mushroom Tinderlings, and Boreal Tinderlings . Each of those is available in the size of an average avatar and a tiny.
Avatar: Cerridwen's Cauldron: [CC] Forest Tinderling Avatar (Release Date 1st Feb. 2014)
Poses: Purple Poses
Location:  Cerridwen's Cauldron
Posted by Dagmar Haiku at 12:50 PM 0 comments

Life in the small town was repetitive... Day in, day out, hours rolled by, but it all seemed to stay the same. First there had been school, days segmented into classes, recess giving time to run around and play before being corralled back inside, more learning then lunch, more of the same, over and over. High school followed, less running around, more learning, more time under the teacher's eye, all of it had led to this. 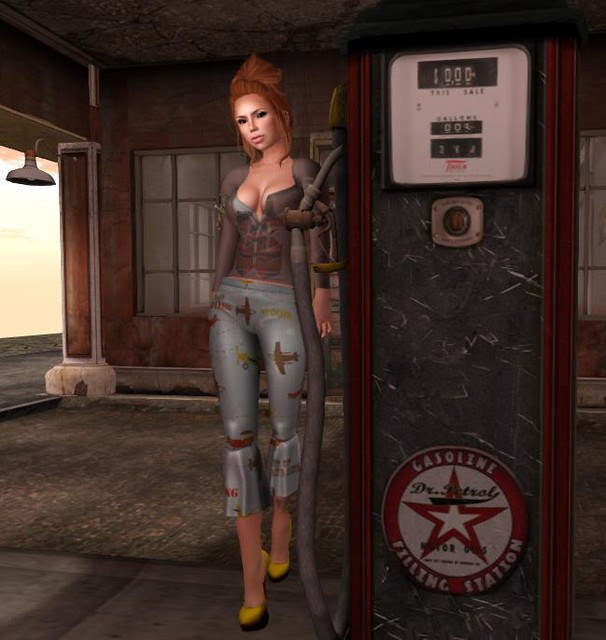 All summer following graduation Ana worked at the gas station. The job had been hers for years, evenings after school, and weekends, times when traffic flowed, to work, to school, to the mountains or the drive-in. Now the days dragged. While everyone else in town was at work, or off having fun, she waited, watching vapour trails of new jet liners criss-crossing the sky. 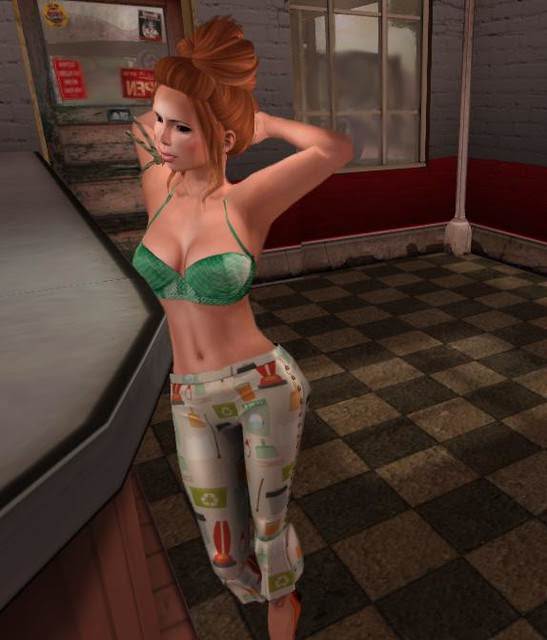 When she wasn't waiting by the pumps, there was always other work for Ana to do in the garage. In the small town, small minds were secure in their mid century beliefs. Womens work was cleaning, and so she cleaned. She was about as satisfied with this as she was waiting by the pumps in the heat of the day. Who needed a clean garage anyway? Greasers coming inside to talk engines would use the main garage entrance, housewives and their husbands passed neatly folded bills through rolled down windows, never leaving their cars. The office was a place to pass time, doing as she was told. 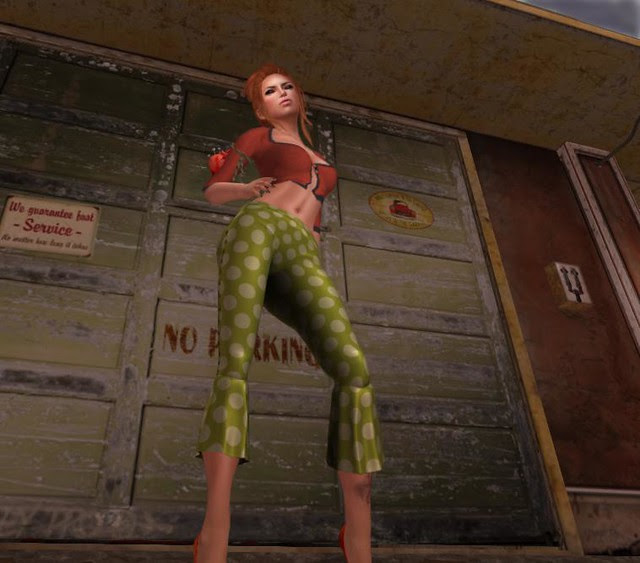 Out back, behind the garage, hidden among rusty junkers under a dirty tarp was her way out of the small town. At night, after Fat Pete locked up, tried and failed to pinch her behind and stumbled off home to his wife Ana would sneak back inside. No lights but her headlamp, she'd gather the tools and head out to the Chevvy she was bringing back to life. Some night soon, she would be free, out of here to places where horizons and opportunities were broader than traditions. It wouldn't be long now. Until then she would work, she would wait.

Some 50's fabulousness here from +REDRUM+

Gypsy Pants are available in five different theme packs, with three designs to each pack - Here I went for the Fifties! The little buttons down each hip seam are beyond adorable, and it made me chuckle a bit to see the VPL creases on the front - a nice touch!
All your usual MESH sizes are included, for just L$139