"When the magic's white is too light and black is too dark, you need to choose the color of a varg." 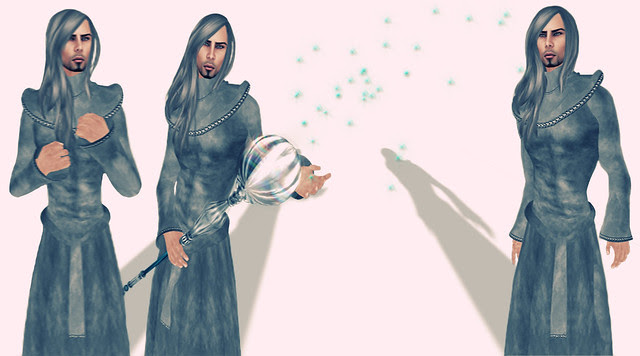 Recently, I've been stalking VIGo's and KnickKnack's Lucky Chairs and the MiniMania again, hoping I'd be lucky and win one of the gorgeous fantasy/roleplay-outfits that both creators put so generously out to be won. It's always full priced items you can also buy in their shops, and since the texturing and the prim- and sculpt-work has convinced me long ago, I was rather excited when the 'S' finally showed up and blessed me with this beautiful ensemble. VIGo's Taliesin robe has an extraordinary collar solution and comes with sculpted sleeves and pants legs - the texture itself reminds of an expensive velvet, with a precious-looking edging of silver and black on the sleeves and chest piece.

If you don't feel like waiting for your lucky letter to come up, you can also purchase the robe directly in store; there is a number of 11 colors (grey, purple, green, red, teal, tan, white, yellow, black, brown and blue) to pick from which will be yours for 400 L$ each.

Staff: Deviance - Enchantress-Staff (part of said outfit)
Outfit: ViGo - Taliesin (free at the Lucky Chair or 400 L$ in store)
Posted by Storm Torvalar at 7:10 AM 0 comments

It had been over two days of reading and searching but Isobel still had not found the spell which would allow her to spawn roses for her true love. Even in the oldest books about lovespells she could not find any useful information. So she started to experiment. 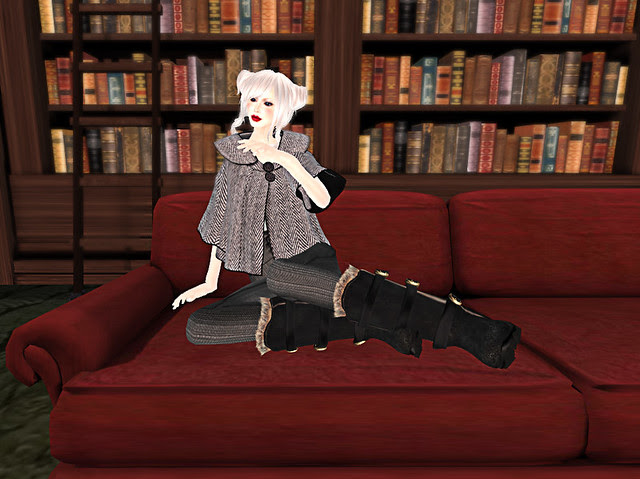 Some hours later she struggled with making her tendrils stop growing as it itched. It kept her from reading about how to transform herself back. At least she would have enough roses to decorate her house for christmas with them. She was even tempted to start to grow very rare roses on her head and to open a flowerstore it would cause way less trouble than being a magician. 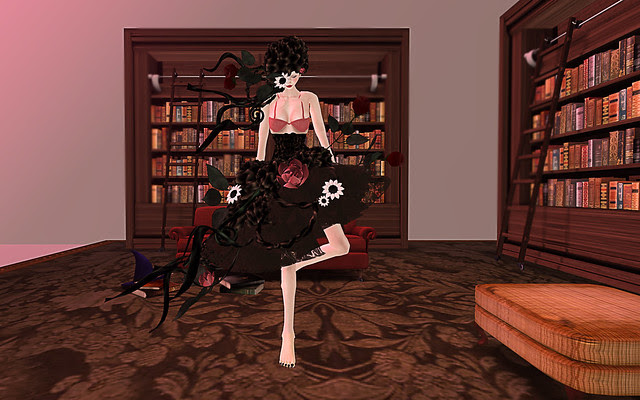 Today is the last day of the Zombie Popcorn Dark Magic winter. So its time to use the last chance to see the sim and to get some of the event items. But there are also great items at Zombie Popcorn Brand. For example the grey cape from Quarantine. The primparts are either mod or have a resizescript. There is an alpha layer included to hide the body but it is also possible to make it fit without using that layer. It goes very well with the grey trousers from Elan. Those are high-waisted. They could either be worn with the included prim parts or in boots like on the picture. The boots and the trousrers are both items from the Dark Magic Winter event. They come from VC Designs and are available in several colours. I liked the black ones best. The boots are great in winter as there is fur in them so the feet won't become cold. Of course the boots have a well working resizescript.
The outfit on the 2nd picture comes from Aliza Karu. Its possible to make it fit a smallish avatar like mine without spending hours on a posestand and it is very pretty and unique. It comes with hair with roses and a dress and the bra like top. All of the items are no copy but trans so the outfit might be a great x-mas gift. Its one of those dresses which are simply made to take stunning pictures of them. The pose which has been used for the picture comes from the doll set from Captivity & Co. . The furniture on the picture comes from mudhoney. Its also one of the event items from the dark magic winter. The set includes the bookshelf, the sofa, an ottoman, a pile of books and a pile of books with a magician hat on top. The items are copy so its possible to have a lot of books in the house. The green carpet comes from Libertine.

At those items which are sold in an event I added the slurl to their mainstore at the store name and added the slurl of the event near the price of the item.
Posted by Dagmar Haiku at 10:15 AM 0 comments

The snow melted when landing on Sara's skin. Her pointy ears were hidden under plushy earmuffs. Sara's real name was Twinklie Pinky and she never had seen real snow although she had been a christmas elf for the most time of her life. It had been boring and she never understood why christmas elves never got at least one of the gifts they created. Being a christmas elf meant to be a in a sweatshop for a lifetime. Not only the work was hard. The elves had to listen to christmas songs all the time and all they saw were the big halls where they created the gifts. Sometimes they saw Santa play with the reindeers in the outside or take a ride to some scientists at the northpole where he exchanged some of the gifts for alcohol. It was surprising that there had not been a revolution allready. At least for Sara it was so she started one. And got kicked out, as some other elves too. So finally she had the chance to see real snow and to see a bit more than just gifts. 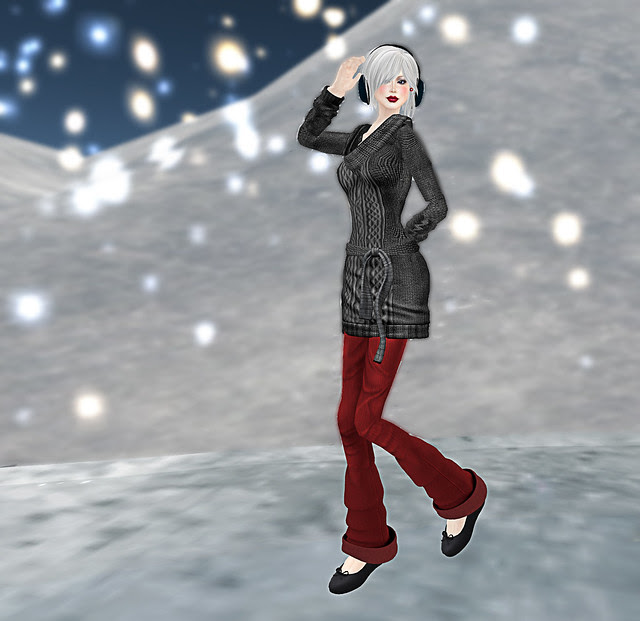 There is a advent calendar at 22769 which has a lot of cute gifts in it. The red woolen trousers are the gift which is today in it. They come with two kinds of cuffs (for females and males) and are very comfy and cute. The long shirt or short dress comes from Aoharu. It comes with three kinds of skirt. It is possible to wear just the dress or to combine it with trousers or tights. The hair is the latest relase from Wasabi Pills. It is possible to change the colour of the hairband and of course there is a resizescript included. It is always good to have some short hair as it is very good for pictures. The Earmuffs are one of the new releases from Virtual/Insanity. It is also possible to change their colours with an inbuilt script and they could also be resized with that. They are a great accessory to let a winterish outfit look even more winterish.

OH! do I love this pose and being British nothing suits better than a nice cuppa tea!. Ok i'm a traitor and only drink peppermint tea, but we can still solve anything over a nice cuppa. Anyway at this time of year there's nothing more important than taking time to relax, and when it's my time to relax I find nothing eases the pressures than a bit of retail therapy in SL it's far less stressful than RL. So here are some of my lovely finds to share with you. 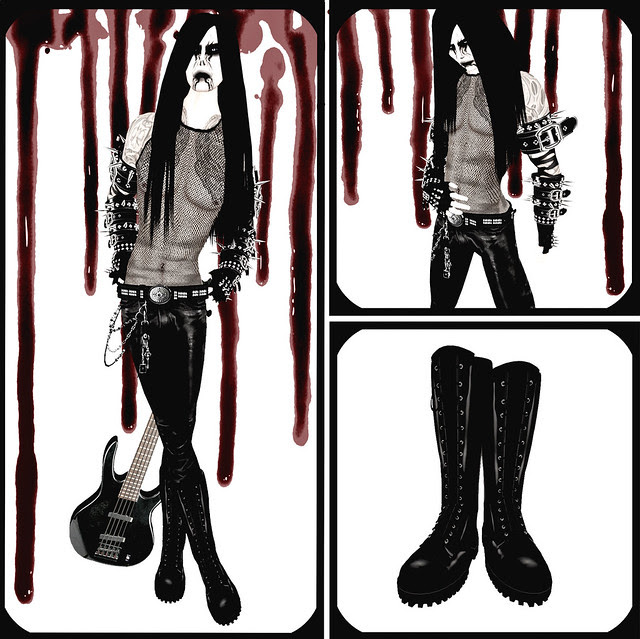 Ever wondered where all those metal heads in SL are hiding? They already seem to be a rather rare species in RL, at least where I'm living - and if we're talking about those people whose outfit tells you what music they might like. It doesn't seem to be much different in Second Life, so I was having some trouble to dress accordingly to my (musical) mood when I recently re-discovered my love for Black Metal. Thankfully, there is certainly no lack of awesome leather pants and net shirts in our little world, so the basics were there, and I remembered the Cake hair I'd bought ages ago and which matched the look perfectly, but... the rest?

While looking through old screenshots, my eyes caught a pair of spiked armbands I was wearing on one, and after some research, I also remembered the store's name: [SP] - Spider Productions, established in 2005. This shop does not only sell spikes, studs, and everything that looks awesome when you're going for a darker look, but also stunning hybrid avatars (such as dragons), armor, jewellery and accessories, weapons and much more! And they also have a bunch of Lucky Boards out, in case you want to check on their quality first. The boots I'm wearing in this post, for example, are one of the Lucky Board prices and greatly textured, plus: easy to resize. A:S:S's latest release, the more-than-awesome Count-corpse paints (you can choose from a variety of 10, or simply grab the fatpack) added the final touch to my outfit.

Although the furniture was old and the walls shabby was the club in the bunker one of the most exclusive ones in the city. Asura had absolutly no problems to be allowed to join.Some people thought that she the crown of spikes she had around her head would be a form of a stigmata. Asura always laughed when she read their minds. She was one of the mystical beings in the town. Or even more she was a demon. The story of Jesus had always amused her and she loved to tease the angels she met now and then so she had used spikes to make herself a crown of them. It worked well. It made angels so angry. Now and then they tried to attack her in the club. Asura always pretended to be massivly hurt so that the angels were thrown out. It was way to easy to manipulate humans, angels were way more fun. 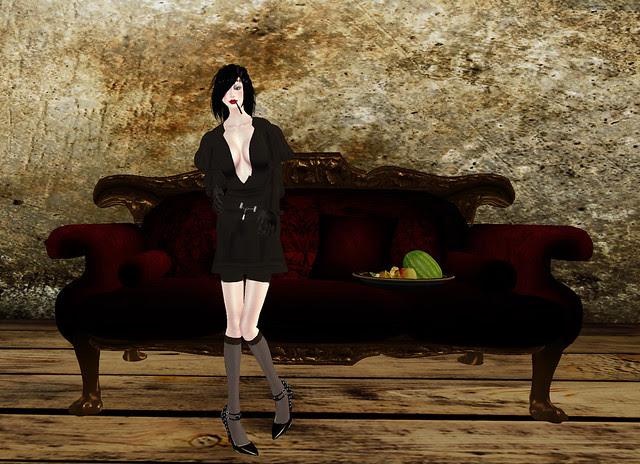 Diapop created a black dress which reminds a bit on the fashion of the 1920s. The set contains black gloves and knee socks. It comes on all layers and the primparts are modifiable. I really like the bell like sleeves for the upper arms. The whole outfit looks very sophisticated in my opinion. Hysteria takes part in the Grunge Soul Project. Their item is a crown of spikes with a fitting tattoo layer, so that it looks like blood would be running out of the wounds the spikes cause.
The couch and the plate of fruits on it come from Libertine. Libertine is a subbrand of Fallen Gods Inc., which sells furniture, decorations and houses. The Couch belongs to the Marquis Set, which is the first Libertine release. It is included in an adult and a mature version. Up to four avatars can sit on the couch. The animations are, no matter if they are for sitting innocently around, cuddling or even closer contact, always well chosen. The couch also gives out several items, for examples grapes which can be used to feed the partner with them. Beside the great functionalty the furniture is very well designed. It looks great in houses and should fit well into clubs too. For more informations take a look at the Libertine blog.
The standing pose does not belong to the sofa. It comes from one of the new sets from Purple Poses.