The cold and dreary days and nights of this circus were done. The humans, with their whips, cages and silly clown cars were gone, perhaps dragging some different mountain of canvas to other unloved patches of ground on the outskirts of towns that never quite made it onto maps.
Now the Circus of Cats went only where suited its performers, namely anywhere warm. The crowds would turn up wherever they decided to perform. 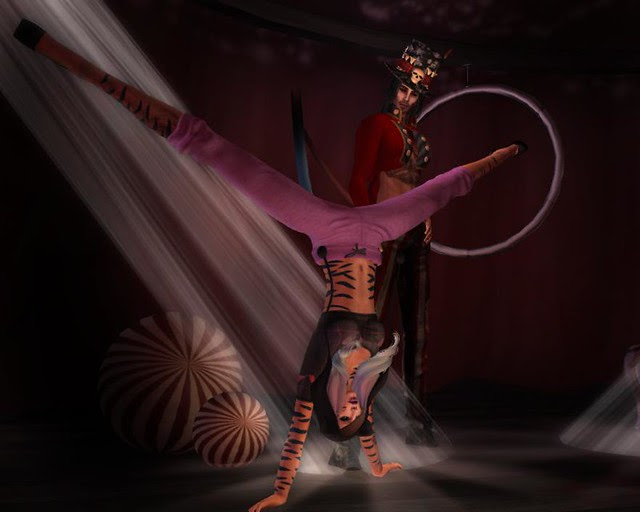 Jinx had taken the ringmaster's jacket from its former owner, along with the canvas from which he had fashioned his trousers, in lieu of cash money owed from a final hand of poker on the night they had won the whole enterprise. The whip he had thrown away, no need for it now they were working for themselves. 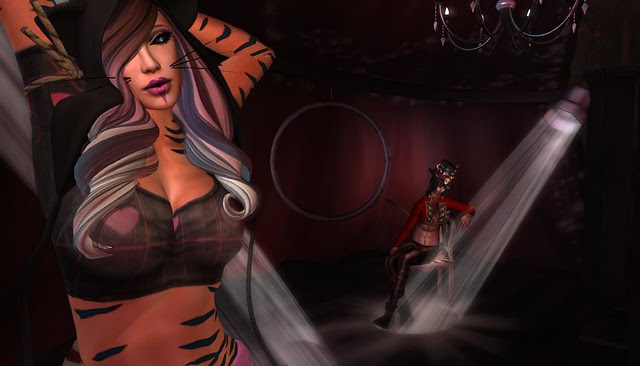 Sasha had kept hold of her costumes from their lives before. No matter what the situation, she would never have worn anything she hadn't liked. Besides, most of them were sparkly. No good for the workout before the show, that demanded comfort every bit as much as she demanded style. Favouring pink, which contrasted so nicely with her own colouring, the heart motifs pleased her, the sweetheart of the show. 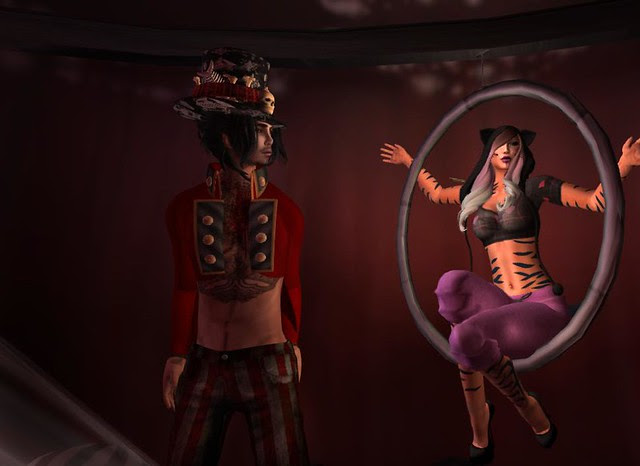 Now the cats of the circus had become the Circus of Cats, in charge, and doing as they liked, as cats of all kinds are apt to do. Feline grace made the most difficult tricks and moves look easy, and yet still they would practice. Sasha trying out new routines, settling spins, twists and turns into muscle memory as Jinx worked on speeches to whip the coming crowds into a frenzy. This tom was a born showman. Mimicry of the blustering performance of his predecessor made her laugh, and would bring cheers from the crowd once they filled the old bench seats. For now, they would enjoy the atmosphere in the tent, in the brief moments while the other cats were carrying out their own preparations, the baited breath silence made their time alone together all the more special. 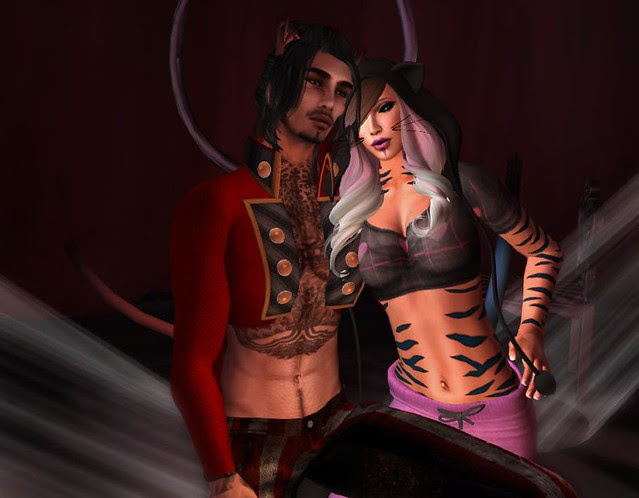 Jinx :
Hat : VooDoo MoJo Top Hat  - Freebie
https://marketplace.secondlife.com/p/VooDoo-MoJo-Top-Hat-Wear-me-15-prims/4275275
Fantastic freebie hat - complete with bones and feathers!
Hair :   *Dura-Boys&Girls* 20 (Black) L$ 360https://marketplace.secondlife.com/p/Dura-BoysGirls20-Dark-6color-Fat/2574278
Eyes :   o.O No longer available!
Tattoo : +REDRUM+ Leopard Tattoo - From the Jack or Jill Hunt
http://maps.secondlife.com/secondlife/Death%20Row/196/83/56
Jacket :  [Lazybum] Ringmaster Jacket Red L$ 250
http://maps.secondlife.com/secondlife/BOYSTOWN/87/72/23
So... I forgot to add the cuffs on the sleeves. Still looks great. These come in a great array of colours, to suit all your circus needs.
Pants :  +REDRUM+ Carnivale Jeans Scuffed (MESH)  L$ 89
http://maps.secondlife.com/secondlife/Death%20Row/196/83/56
Yum yum yum. Don't know what it is, but I have a startling amount of circus stripes in my invent. These are a fantastic set, available as shown here all scuffed and stained, or in a clean for sunday matinee best!
Ears and Tail :  TKA Neko - Species Neko Tail Ears Red Black L$ 1
https://marketplace.secondlife.com/p/TKA-NEKO-SPECIES-NEKO-TAIL-EARS-RED-BLACK-FREEBIE/871974
Twitchy tail and ears all for one Linden. Can't say fairer than that. Not with a mouthful of marbles anyway.

Also shown
[Virtual Props] Psycho Circus Photography Prop; it costs L$900, and the permissions are COPY, MOD, NO TRANS.. There is no notecard associated with this product, just rez and pose! It has 30 Unique poses in 3 pose sets, adjustable with memory for up to 100 avatars, photographer controlled and can be placed into any photo studio prop rezzer. 42 Prims. Sasha's single poses are from the set.
http://slurl.com/secondlife/Endless%20Death/27/107/24
Posted by Vyl at 12:35 PM 0 comments

Little Red Riding Hood couldn’t remember when she had been called “little” for the last time. Actually, she couldn’t remember when she had been riding for the last time, either. She was a big girl now, and she preferred four-wheelers to horses. What remained, though, was the red hood. Wolves were colour blind, luckily, and their blood didn’t stand out against the thick burgundy fabric. Little Red Riding Hood - Red Hood, or just Reddie, for her friends - caressed the wolf tails attached to the hem of her cloak. It was a wise move to leave the basket at Granny’s years ago, she thought. 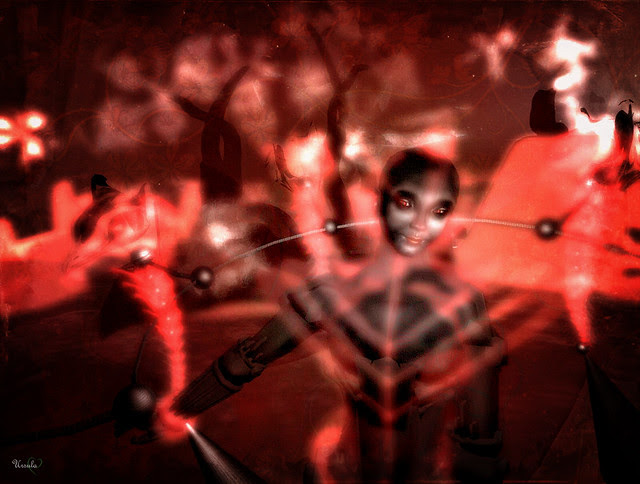 The semi-automatic rifle she carried these days couldn’t hold any freshly baked cake, not mentioning the bottle of wine, but wolves were afraid of her now. “That silly old huntsman... what an idea, playing with scissors and stones, when you can resolve the problem with a ‘bang’, and the bad bad wolfie is gone for good!” – Red Hood let out a nasty little cackle. In the woods, the last wolf cowered and started whining. He knew he couldn’t win. 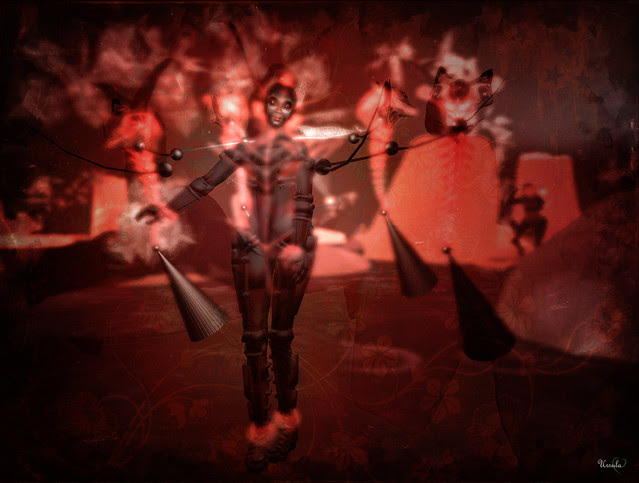 “Little Red Riding Hood – The Other Side of the Story” is a new exhibition at The Companion, a sim owned by Mimesis Monday/Heidi Dahlsveen, a "storyteller in both worlds". She invited some excellent SL/RL artists to collaborate on a joint project... and there we go. Alpho Fullstop (one of the alter egos of the genial visual anarchist, Elif Ayiter, mother to the entire Alpha Tribe), Cherry Manga and Soror Nishi together, until April 15th. The avatar is a gift at the installation. Three fantastic creators, and one free Alpha Tribe avie. Do you need more bait?

... and please, please root for the wolf.
Posted by Ursula Floresby at 7:02 AM 3 comments