Her head ached. More than that… her head wanted to explode with pain. But what can you expect when you’re after the umpteenth attempt to break through a door by – literally – ramming it? There were times when she actually hated her job, albeit the profession she chose fitted her perfectly. There were times when she felt like fish in the water... now that was a mixed metaphor, she thought a second later, given that she wasn’t fish. She was ovine, with a pair of beautifully curling horns, and sheep seldom swam. “Ooohh... it’s starting again!” – she was silently howling as the dolour hit her forehead one more time. “An hour, maybe an hour and a half, and my shift is over!” – she thought thankfully, and she gave in to the excruciating pain. 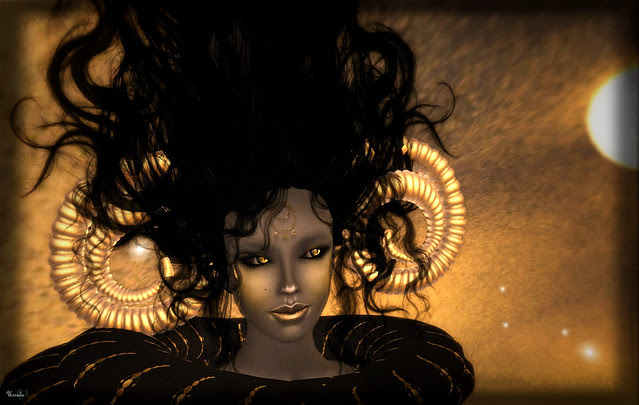 The soldiers had been attacking the castle relentlessly, for days and days. They used a battle ram to bring down the main gate. The heavy instrument broke into pieces but not before it smashed through wood and iron, allowing the conquerors to pour in the fortress. The siege was over, the weapons were dropped for a while, and nobody cared about a destroyed battle ram lying in the moat.

I might have mentioned now and then that one of my absolute favourites among SL avatar creators is doubtlessly Alpha Auer. Now you have a unique opportunity to stock up on her wonderful beings for a ridiculous price reduced by 50 %, as 30 full avatars from the main collection will be permanently removed from the inworld store, and after April 7th they will only be available at the SL marketplace. You still have a long, long weekend to shop, so visit alpha.tribe.island, it’s definitely worth it!

I am Aries IRL so I visited the current Zodiac event, dedicated to my sign, with extra curiosity. I didn’t regret the trip, as the spectacular horns by *BOOM* would make any ovine truly proud of being fiery, headstrong and smart. :) 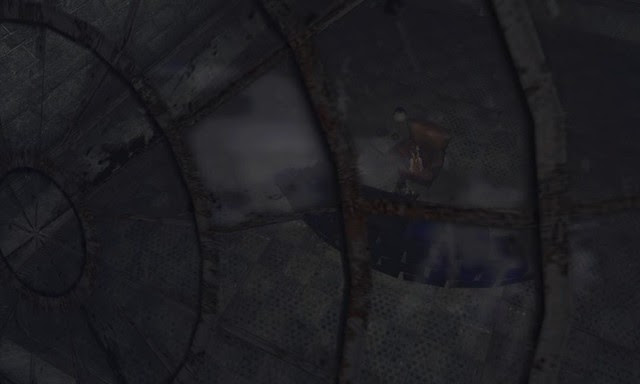 High on the cloud mountain the citadel of memories nestled between stone and iron. Each dwelling a fortress for those within its protection, when stepping outside into thick hanging mists meant madness and death. Darkness and swirling winds wrapped around each strongfast, pressing in against brick and glass... 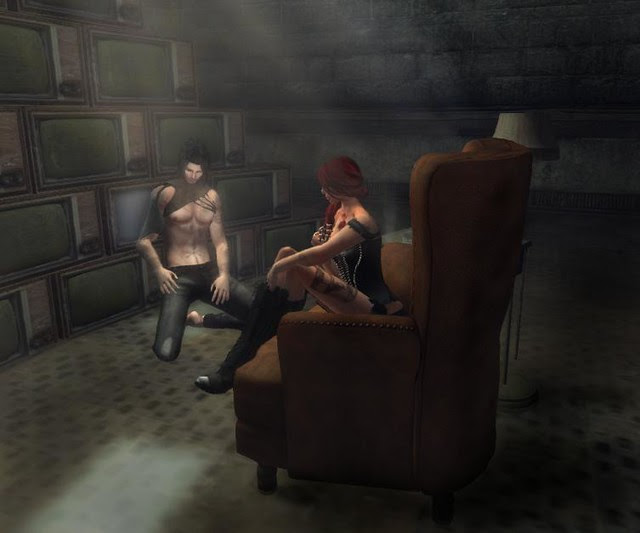 Such special glass, poured aeons earlier it seemed, deep in the mines of the mountain, where no light but coalfire ever reached. It filtered moonlight from the mists, lighting the rooms where it was wanted, letting those who remained inside see what they would. Sylba liked to see, liked to watch. Her watchroom was filled with screens, lit in the gloaming with flickers of those spirits beyond the walls, the ghosts who wailed in the mists. 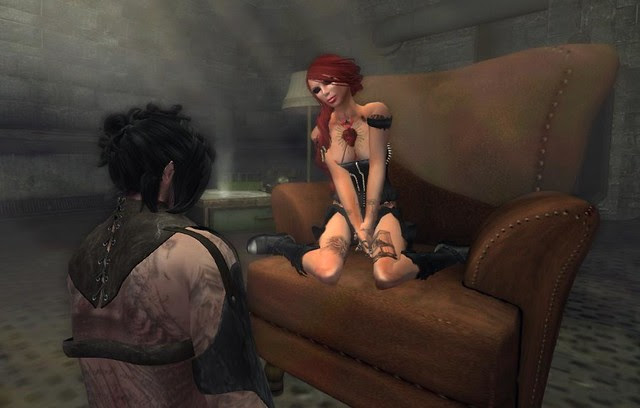 Within the walls though, she felt as a caged bird. Stories of such, or the lingering memories of them at least, had played on her screens for so many years. Sylba had seen them there, flying free, through skies of blue. Skies far different in time or miles from the purple and green bruised skies above her own cage. The feeling grew stronger each day, demanding recognition. That was when she called for Gryphon. 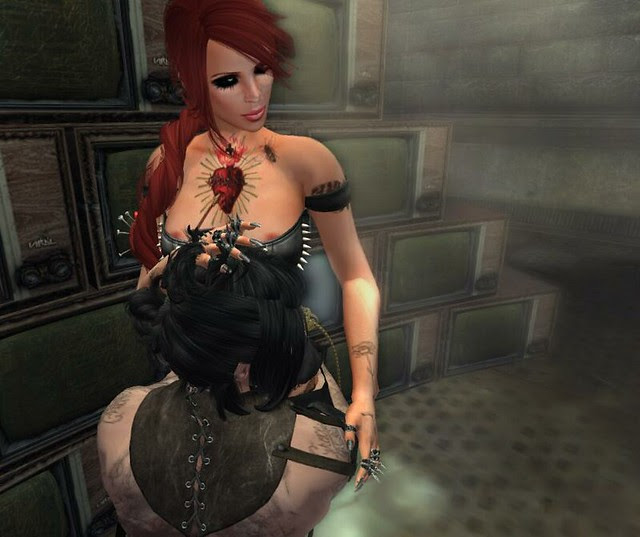 She called for him each time the lost souls came too close; through the glass high above, and from the screens before her. Gryphon wandered the wilds more than she, charms and sigils added the touch of tradition to his protective clothing, now discarded at the airlock. He would come when she called, whenever he was needed. There were bound together, heartstrings and ropes. 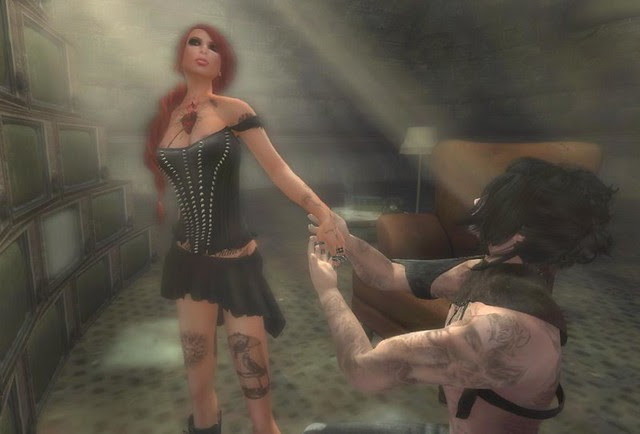 The designs that filled her mind would be etched on her skin by his touch. Already rendered in inks were her fear of living as the caged bird, never free to fly as intended. The sun still shone brightly, if only here in her world of moonlight. Flowers and insects long gone from the lands, but not forgotten, remembered by Sylba as part of herself. The sacred heart, a recent addition, had been inspired by Gryphon. As he had walked through the rubble and wastes of the old city, far from the current citadel, spirits long at rest had stirred again. Following the living, singing the stories of their souls. Belief rained down that night, longing poured over the screens like wine into cups at a feast. That image, that symbol, burned in their minds and soon found a place in her to rest. She had called him again tonight, skin would lie on skin, and images form. What they would be, only the spirits could tell, each had their life, and this one last chance to be remembered... 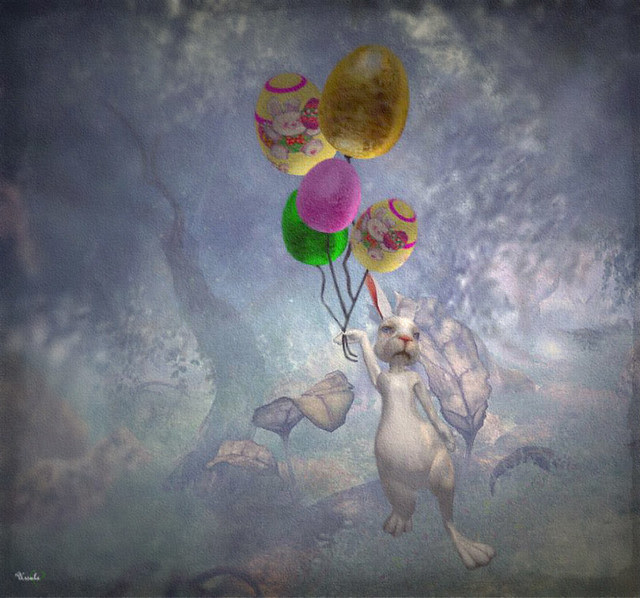 He was exhausted. He had supervised the colouring of about six and a half million eggs... and before that, he had had to talk millions of anxious mother hens into surrendering their future brood for a nobler purpose. Oh my... luckily, he spoke Hen fluently. Then the manufacturing of chocolate bunnies, what a headache. His hired workers, some dumb elves from Santa’s factory on vacation, wanted to make each and every chocolate bunny to his image, like they did with the chocolate Santas in wintertime. What a personality cult... he had always known good old Claus loved adulation, but the extent of the man’s vanity, experienced from close, was astounding. “I’m so glad Easter is over!” – he thought. “Being the Easter Bunny is no fun at all. Carrots, on the contrary, definitely are.” He lowered his front paws so that he was on all fours, like a cute ordinary bunny should be, and he happily hopped away, towards a nearby orchard. He was free for one more year. He felt one lucky hare.

Posted by Ursula Floresby at 5:26 AM 0 comments