Water, water and some more water. Nami had promised to herself never to work again on a dreamliner. But the offer was to good not to accept it. She would get 20 grains of unicorn blood for just one week work on the ship. The crew wanted to find a mystical island so they would need to sail through the lost ocean. And for this they would need some help of magic creatures like Nami. But of course everything went wrong. The big treebeings which formed the mainpart of the ship were not able to synchronize their dreams so the ship fell apart. The crew had the same problem. None of them was trained enough to stay in one dream. At the end Nami was alone in the middle of water. Not that she didn't suppose that this would happen. With a sigh she started to dream herself some wings to manage to get back a bit faster. 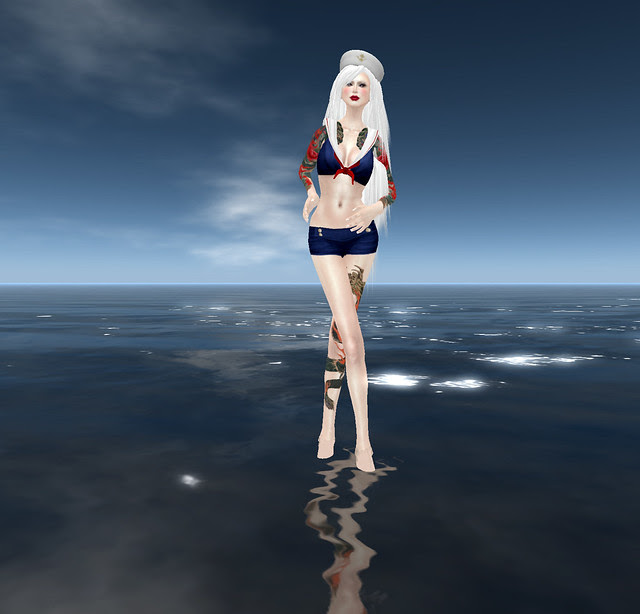 The grasp hunt is running till the 9th and there are some really great gifts in it. This mate costume is the gift from Amerie. Its a nautical looking ensemble for girls. With a hat, top and shorts and a shawl like piece of cloth which is worn around the shoulders. The primparts of the item include resize scripts. The pose comes from purple poses. Theirs are really well made. Its a store which is the death of a purse of any body who loves and needs static poses. They work very well for fashion pictures and well they are not that deathly as the price of one static pose is 10L$ and the couple ones I saw were at 45L$.

People stayed in their houses in nights like this. Holly was one of the reasons why they did so. At the moment she was busy with stareing at the moon. She wouldn't transform in this night. Which was good. Hunting as fox was nice but sometimes she had chickenfeathers in her mouth when she transformed back. But this night she would be able to concentrate on her prey and not get distracted by all kinds of birds which might cross her path. She curled her red lips to a grin when she remembered the man she had hunted in the night before. He had carried a chicken in a bag which he threw in her direction. The memory of his wide open eyes when recognizing that the chicken did not intrest her at all made her lick over her lips and her heartbeat became faster. This night she would just hunt for fun. Holly hoped that everything would work as she planed it so that she would finally get the bully who always pestered some of the younger pupils in school. She tried to get him for several months now but it seemed like he never left the house in the night. But this night he would. The preparation of this night hadn t be too much fun. Tight tops, short skirts and boots which had so high heels that she needed all her supernatural powers to be able to walk on an elegant way in them. But Sebastian was not able to resist the idea of meeting her in the night. They would have so much fun together. 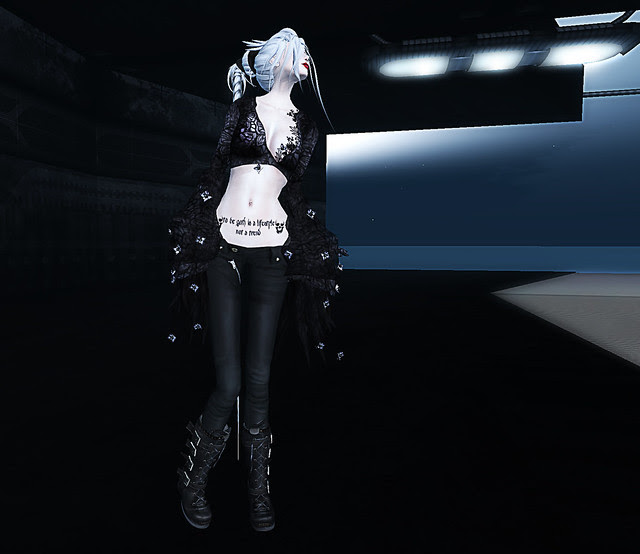 When it comes to intresting wounds and scars Hysteria is one of my favourite stores. But they also have tattoos. This stomach one says "to be goth is a lifestyle not a trend" which is a great idea as a tattoo is something you normaly have your whole life. The top belongs to the chod collection from Miamai. I love the patterns and the unusual sleeves with the lace. The cut is lightly asymetric.
The hair comes from Wasabi Pills. It is ccs scripted hair. So it contains some fighting animations and works as weapon in any collision based fight system. The scripter told me it works with dcs, ccs, osiris, lcrs, rcs, nh, ura and that there will be soon gorean meter version. It works with the usual /1 draw /1 sheath commands and then like any mêlée weapon. The hair looks like a very long braid and has some loose streaks at the front and the side of the head. Its unisex and looks of course great on both genders. For those who are not into fighting there is also a version available which only contains a resizescript. The weaponversion of course also comes with a resizescript. So that no warrior needs to try to redo his or her hair with bloody hands.
I used some of my favourite trousers from a:s:s to complete the look and boots from death row designs. 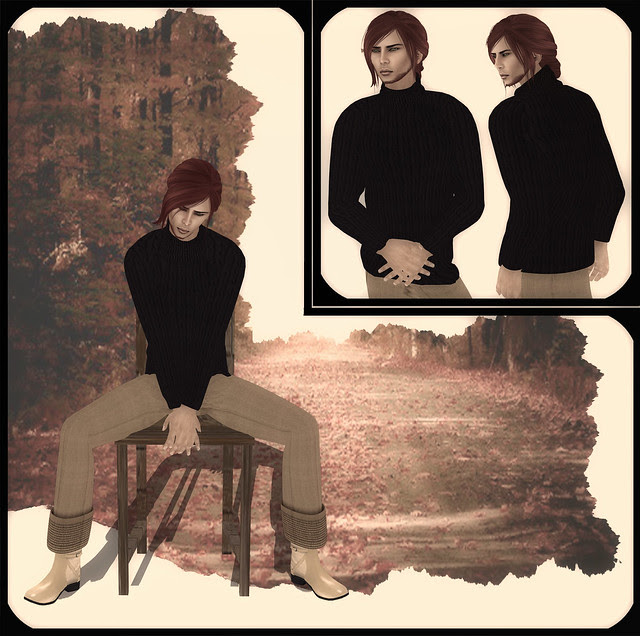 The Gallery Gift Shop - an eclectic mixture between art gallery and store - has gone into it's 3rd cycle of releases, and 22769 is once again participating with a mesh-outfit that is perfect for fall. The beige pants are about 7/8 long and have a detailed, wide cuff to show off with your pair of favorite rainproof boots. Cable-knit is the comfortable sweater with the small turtleneck and its rich, dark-brown color, so if you're looking for a nice ensemble to lounge in front of the fireplace and enjoy your hot chocolate while the rain is pouring down outside, I can only recommend to visit the Gallery Gift Shop, grab a demo and then make it yours!

Since she got the dress Lisa's world slowly became colourful again. It was a gift from her siblings who hoped that it would make her smile at least for a minute. For a long time it had been black. Then it was black and white for some time. Now it was gaining some tones between those colours. At some days she even saw a golden flower or a blue bird. Lisa loved the dress it felt great on her skin and she knew that she would only be able to see how beautiful it really was when she would be able to see all colours again. 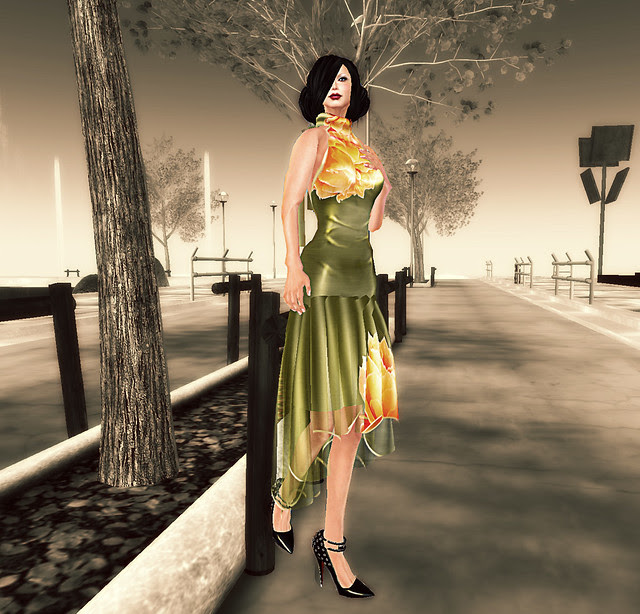 Lika Ruby is one of the stores which make wonderful textures and are able to create those dresses which make every woman look attractive on the elegant way. The Lika Ruby mainstore just moved to the rebuild KDC sim. To celebrate the new mainstore they released a new groupgift. Its an asymetric dress with a flower pattern on the top while the lower part is gold green. The top is held up by two scarf-like bands which are knoted together in the back of the neck. The skirt has a sheer lace layer over a nonsheer layer. The dress is a great gift and a wonderful opportunity to get an idea about the quality of the items from Lika Ruby.