She had found the horse somewhere in a street. A child might have thrown it away or parents or a mean sibling stole it to cause some desperation. So she decided that it was perfect to help her for a while. Of course if she would ever find something which would suit her need she might send it for a journey to find its real owner but at the moment the horse was hers and she really enjoyed not having to fly all the time. Her wings were fine more like being made of spider cobs and so she walked anyways a lot. The horse was robust, fast and even had a colour she liked. 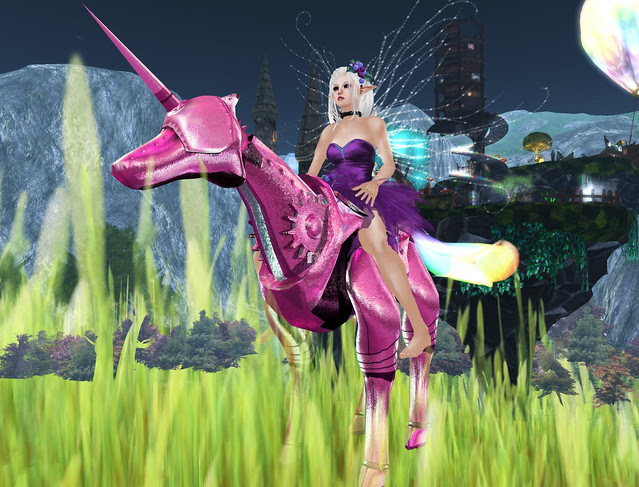 Although she was very small compared to humans she was one of the best head hunters. People of her size were common in the lands which were her home so this was not really a surprise for her clients. But her love for pink and all the pretty colours was. Most did not realize that this was a benefit for her. Who would think that a cute fairy riding on a pink toy horse could hit leaves flying in the wind with her arrow. 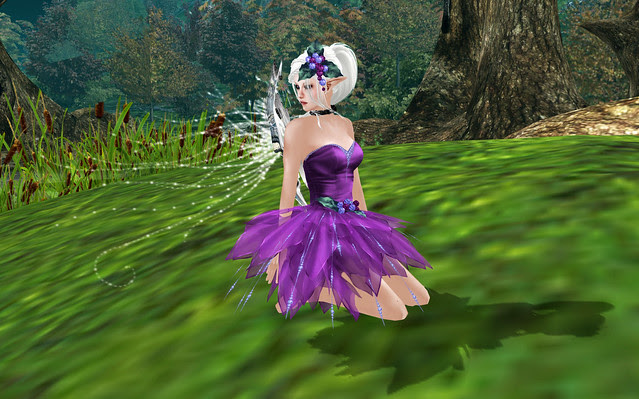 Petites are now around for some time. They are small, cute and fun and the center of their lands - the Petite Kingdom had to move one time before because it was too small for all the wonderful items. This happened again and now it will be on a whole sim. As the first locations of the Petite Kingdom there is a lot built Petite sized and very beautiful. The sim consists of floating Islands which contain not only stores to explore.
The sim will open tomorrow at noon with events and a hunt - called the Crystal Hunt - in which many of the items on the picture will be huntgifts. For example the pink dress from g-field it fits petites and the flowerish look makes it suit the fairy like built of Petites. The set contains also a headdress and wings. The wings on the pictures are deadly besides of being very beautiful. And come from Aurora Elysium. While being wings they contain also a quiver and the set itself a bow. So they are a mix of wings and bow and arrow. It is scripted for spellfire and DCS and offers a wide range of possibilities for example to choose if it should act like a long bow in spellfire.
The brass horse is an other huntgift. It comes from Bare Rose. There is an ao included which allows to ride it.
Yabusaka also takes part in the Crystal Hunt. Their items is a choker in a male and a female version.
The hair is one of the latest releases from Wasabi Pills for Petites. While most of the hair is bound together in a pony tail some streaks managed to break free which looks cute.
The avatar itself comes from Fallen Gods Inc.
The hunt  at the Petites Kingdom will start at noon SLT at the 29th of  September with celebrations starting at 3pm SLT and going until 9pm SLT.

The revving of an engine, and the squeal of tyres on tarmac would always split the night... 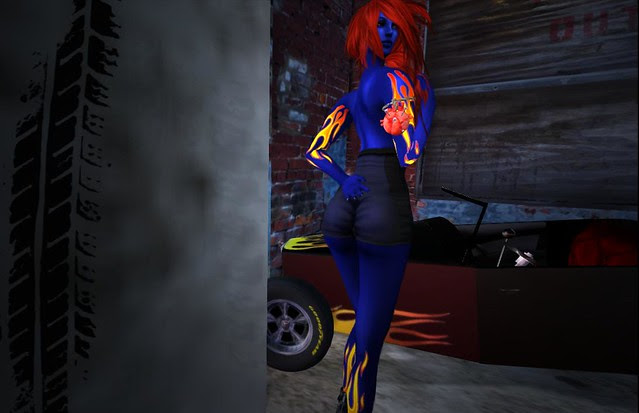 Hotrod shone in the darkness. Not just from headlights burning in the night, bathing her in a glow as they swept roadways and buildings, but from the flames licking her curves, part of her being. She was older than she would ever look, meticulously maintained, a classic beauty, still more than capable of setting pulses racing. When she emerged into the world, she had first proven her worth to those who knew her, running the gauntlet of lawmen, carrying precious lillicit whiskey across the border. Speed and agility were her hallmarks, while some of her fellows had been caught, locked up and away, this had never been her fate. Over time, laws, and the world around her had changed, but her popularity only grew. Still lauded for her past triumphs, her beauty was now revered. Racing along highways, and in her work at the garage, people would stare, open-mouthed. Their admiration and care kept her going, in a world of boxy sameness, of safety and computerised sensors, she was real, was raw and dangerous. Forever a challenge to life and limb, in leather, chrome and flames. 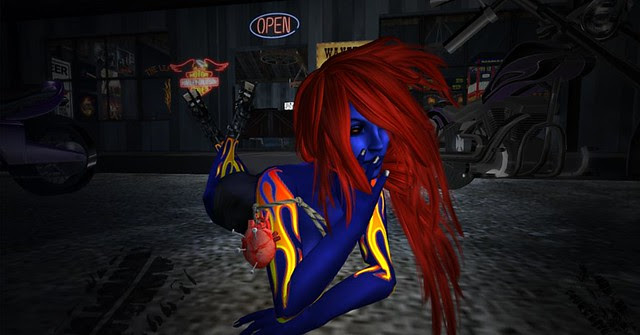 More years ago than I really care to think about (back in 2007) a very good friend of mine had made some tatts, these are they. On one occasion only, she showed them off on a blue skin. She looked like a bad ass hotrod, possibly not what she was going for, but the idea has been lodged in my mind ever since. In a revamp of her store, she is re-releasing some of her classic designs, so I had to try an recreate the look to share with you all here. While the flames look good on all skintones, for me, it will always be the dreamcar, my flaming blue hotrod.

The Nohkternal Designs tattoo comes with all layers, tattoo layer included, for L$150. You can find them here...
https://marketplace.secondlife.com/p/ND-Flames-Type-1/222554?id=222554&slug=ND-Flames-Type-1
or at the new mainstore in the beautiful Arkham sim here...
http://slurl.com/secondlife/Arkham/128/128/2

I utterly fell in love with this skin while I was searching for one that would do for these pictures. Trawling marketplace and browsing my usual favourite stores had nothing that would do, and then I found Rue. I dont know when Id wear the skin again, but I couldn't not buy it after trying the demo. L$600 seemed steep for a skin I'd use in one blog post, which many people can attest to, as I was whinging for hours about struggling to find a reasonably priced alternative, but on opening the box - I was amazed. Not one skin as I'd thought, but 19 versions, a SHAPE, and three make-up options. From expense to complete bargain in one box opening!
Hair : (r)M ~ Hair No.09(F) ~ Cashmere Red
Pants :  Goth1c0: Sticky and Sweet L$250
Here shown is the pants layer, and the MESH skirtpart - the entire very pretty outfit is the price above.
Boots : .:L&B:. "Elise" Ankleboots