The yard looked like it had been left alone for years. But Isobel did not care at all. This was the space where she wanted to make her dream come true. An own car repair shop. Of course the area was a bit wild but she knew that she was able to defend herself and of course she was aware of the fact that men mainly came to her because of her look. But she knew what she did. For sometime she had been working for other car repair shops. It had always been tricky to make her co-workers trust in her abilities. She hoped that it would be better when she had her own shop. Her old boss was quite annoyed when he recognized how many customers he lost after she opened her store. 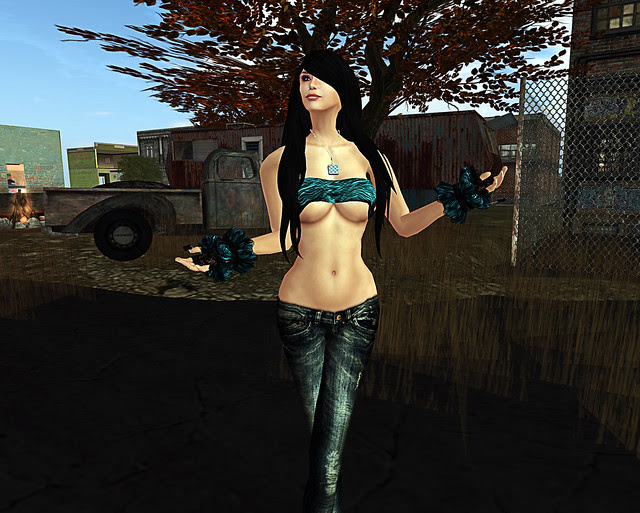 The zombie popcorn brand is in a new round and as always there are some nice items sold there. The skin from Skintimate is one of those. It has some makeup around the eyes which give it a serious expression. The pack contains the skin in three skintones. In combination with the mesh hair from Alice Project it creates a look which reminds me on italian girls. But that might just be me. The hair comes not only with a meshpart there is also a flexi part included which could be worn with the hair to make it look even more realistic. The top and the wristlets come both from Culto. The top consists only of prims and was surprisingly easy to fit. The necklace comes from Virtual/Insanity. Its a very sweet item and can be tinted in several patterns and colours with the help of a menu. The trousers are available at Acid and Mala. And the pose comes from CheerNo motion.

Recently I've received some different shapes to blog, for the most part of my blogging history I've been rather attached to a shape called 'Lana' by Xanthe Audeburgh of CS shapes and as such have been very reluctant to try anything else, afterall our shape is our identity. It seems to me however, that the shape creators out there tend to get a bit of a raw deal for that very reason. A great shape can compliment and change the look of a skin dramatically so it's important to have a little experiment, most shape stores have demos and it's important to utilise that facility. Believe me there have been many times I wish I'd tried demos before I rushed to buy. Anyway this week I tried out Jemma by Bodacious bodies which a super curvy luscious lady and I Love her!

Putting together the pieces

The biggest part of being a blogger for me, and I'm sure many others is putting together the outfits to complete a look. I'm always impressed with skins from Al Vulo and so I'm thrilled with the latest group gift, I love the tones of the skins and creator Hlin Bluebird is always so generous with group gifts. I think this skin particularly suits this shape by Bodiacious body works which as you can see, is very curvy!

Of course I adore those boys at 22769 and was naturally drawn to this pretty 'purple' blouse that they have made for the Black market. Sorry boys it's pink in my eyes, hmm ok I'll pass it for lilac then :D either way it certainly is very pretty and a bargain at 40L.

Psssst also I'm wearing mens jeans shhh! the low slung look still works for women too - just! they have a lovely design on them and come in a leather effect too, they are transferable so ladies buy some for your fellas and if you just can't stand to part with them, well don't!

The ectoplasm was so thick that it dripped in a continious flow from the ceiling and collected in puddles on the floor. The walls were like shadows for Reina. More like the idea of a house on which she could walk than a house itself. Born without eyes she was only able to see the spiritual world. Of course buildings left their traces in that world as they were created by humans. An architect had an idea and workers created the house and all of those people shared the idea of the house which finally made its way into the spiritual world. The older a building was and the more people used it the better Reina was able to see it. This buildings as average it had been a factory for some years but was lost now since an evil spirit found its home there. Of course nobody believed in evil spirits but as there were more and more accidents the workers started to talk and when the son of the owner disappeared the factory was closed. Of course other children had disappeared as well but their families were not wealthy so nobody cared. Now a group of investors had bought the land with the factory to put a shopping mall onto it. As a mall in which children disappeared would cause bad publicity and as bad publicity would mean less profit they called Reina to chase the evil spirit away. She did not earn bad with her job. Of course her advertisement was very discret and she took care that nobody knew at which places she worked, her customers were a bit sensitive when it came to the truth that they actually believed into the existance of ghosts. Reina was different in this. She wasn't a believer she knew. So she was walking through the building following the traces until she found the spirit. He had become mighty through the years and was throning on a pile of ancient telephonebooks in the highest floor of the building. The floor was covered with ectoplasm but Reina did not care. In a polite voice she asked him to go. She was not sure why she kept that habbit but her parents had tried to bring her up to be a kind person so she always asked the spirits first to leave. None of them ever had done so but luckily spirits were quite easy to manipulate. No matter what kind of spirit they were, they all - or at least most of them- feared elephants, this is also the reason why there are never any ghosts in zoos, as they thought the elephants would be able to suck them in with their trunk. Reina started to talk about the big elephant which was waiting in front of the building to move into it and offered the ghost her help to flee. Some time later she walked back down, her lips curled to a light grin. The ectoplasm was allready disappearing. 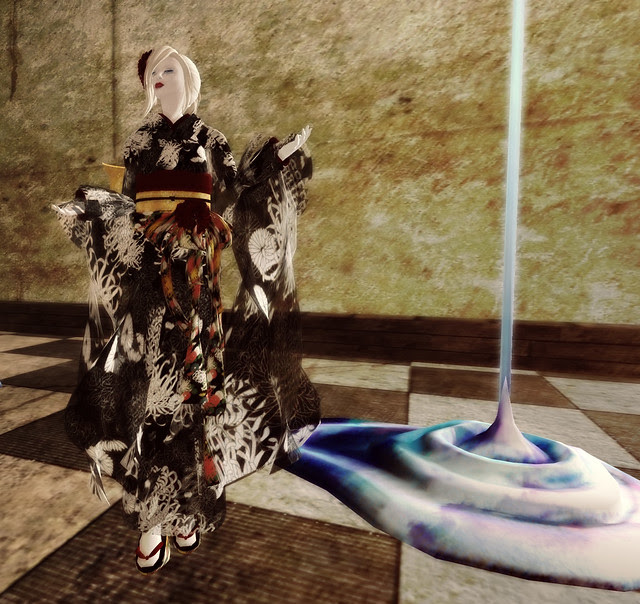 The current round of the gallery giftshop is still going on. And as always the items are really beautiful and unique. The skin with the closed eyes comes from lucky seven. Its a very pale skin with red lips. The skin comes with eyes which are completly white so it always seems like the avatar would have closed eyes. To make this look more beautiful it is possible to buy fitting lashes from the same store. The skin and the lashes come with in a transfer and a copy version in one set. So that you can keep one and give the transfer one to a friend. The kimono in the earthtones can be worn in a long version which covers the feet or in a normal version so that the getas which are included in the set are visible. Beside the getas the set contains also a headdress and a handbag. It was easy to adjust the kimono. There are two versions sold of the kimono one is a transfer one and the other one is copy. The blue puddles come from down down down. They are a nice decoration and as they are unrigged mesh its possible to stretch them. They are sold in a transferable version at the gallery gift shop. The pose comes from the CheerNo Motion Ladies Set 1.