The black swan caught Jade's attention when she was visiting her palace in the north of the golden empire. The empire has been reigned by her family for ages and it was planed that Jade would be the next queen. She was not really glad about this but was willing to bear the duties which would come with that title. As all future queens she was sent on a journey through the empire to get to know the different parts and to meet as many citizens as possible. It was very exhausting and Jade was angry at herself that she accepted to reign. But she knew that somebody had to and did not want that somebody would gain the power who would not care about the empire. So she finally got to the last corner of the empire and during an event where she had to meet many of the local notabilities she saw the swan. Jade followed the animal into the forest and was stunned. She never had been alone in a forest and this was a lost one. People said she had only been a few minutes in the forest but for Jade it was like hours. Her trip to nature changed her a lot and when she finally became queen she took care very well of the lands and a black swan was her heraldic animal. 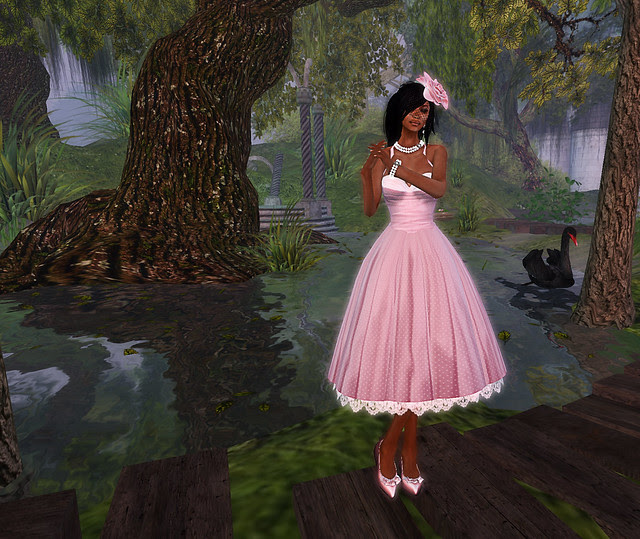 Icing takes part in the Vintage Fair and created a set of wonderful dresses because of that. This is the pink version of the dress. It comes with a fitting hat with veil. The primparts are mod and its possible to make the skirt smaller, which means it also fits small avatars. The systemparts of the dress come on all layers. There is also an alphalayer included which hides some parts between the thights and the hips so that the butt can not poke through the skirt.
The pose is a new release from juxtapose. They are still available at their store at Jersey Shore for 50 L$

The picture was taken at Athan.
Posted by Dagmar Haiku at 9:12 AM 0 comments

[on the way towards stage] 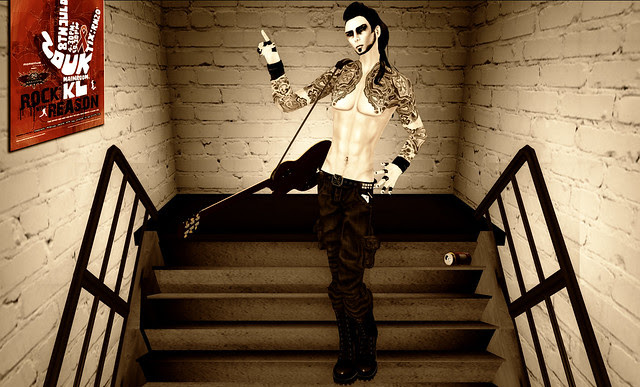 Adrenaline was seeping from his body just like the first hint of anticipating sweat, bemusing his surroundings with the thick, musky perfume of his tension while his heartbeat increased to a level not even their drummer in one of his brilliant solos could reach. He could feel them, those subtle, yet electrifying vibrations of desire from the crowd, radiating through steel and concrete, letting his baby hair raise stand on end. They wanted him. They needed him. And they were loving him, too - eager to get a shot of the drug that was his mesmerizing voice. He paused in his track and looked up towards the ceiling, his words speaking of admiration and wonder. "Can you hear them shouting?" Catching the guitarist's grin from the corner of his eyes, he shivered as the hoarse voice reached his ears. "They're shoutin' for you, man - just for you..." 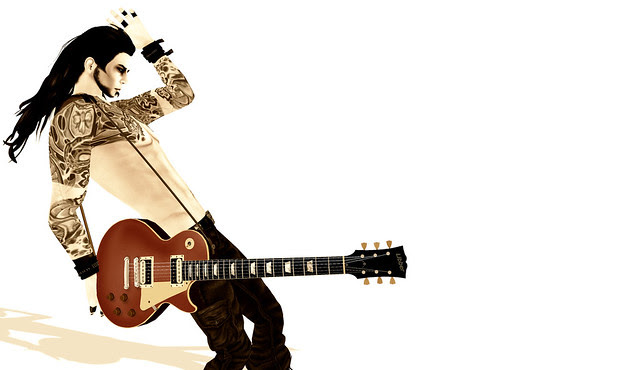 Lately, I never manage to resist whatever gorgeous hairstyle lamb! puts out at Collabor88, and so I found myself leaving with two of the color-packs once again. As you can see, the style called 'Phenomena' is definitely unisex - it comes with matching hairbases, but I'm using another since I didn't want to go for the totally shaven look in these pictures. The pants have been a lucky find for me, too: I really love wearing knee-high (combat) boots, but the usual pants either make your legs look like a stork, or they're hiding most of the shoe with their cuffs. These cargo pants from RONSEM, however, have two different styles of cuffs, one to show your shiny boots off and other, regular one, for those days when you haven't polished them nicely. Said footwear are the rather classic looking combat boots from Abyss which I'm still loving hard because of their stunning textures.
And now - rock on, people!

Evie wasn't rich enough to afford models to pose in her clothing. Luckily she was also not rich so she had to decide if she would buy cloth from her money or food and mostly she bought cloth. Which was not always healthy but good for her shape. So she was able to model the clothes she created. After a while she started to sell many of them. Which allowed her to buy more cloth and to create dresses which were even more stunning than the ones she had been making when she was broke. 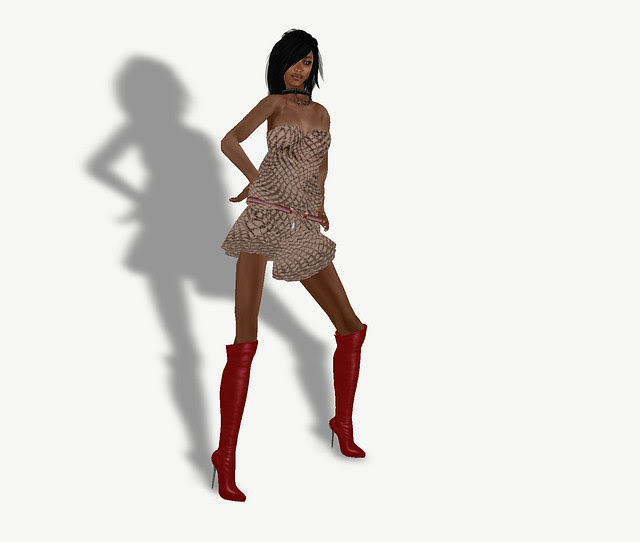 Diapop and Somapop moved and has a nice dollarbie in their new store. Its a shirt and shorts in brown with a diamond pattern on it. The set comes with a fitting belt and its possible to mod the primparts to make the smaller. The new store of Diapop and Somapop reminds a bit on an empty factory building and is worth a visit.
Virtual/Insanity has a lot new items and the choker with the cross is one of them. The set includes two versions, one with a bigger cross and one with a smaller one. Those who do not want an inverted cross can modify the choker and just turn the cross around. There are also a fitting belt, fingernails and a legband avilable.
The red boots come from bax. They still have the wonderful service that they fit the boots in the store which is just so comfy and useful. Beside the great customer service the boots are of course awesome. Its possible to choose between four colours for the leather and several colours for the heel, sole and some more parts of the boots. Its possible to fold the boot-tops down (with several options for the texture inside of the boot-tops) or to hide the top part of the boots.
The skin is the Eboni Skin from ND/MD. I had to look how it would look on my normal shape and love the result. The hair comes from Magika. They have new colour sets now which contain a lot of colours at once.
The pose comes from Miamai. It belongs to a set which will be sold at the Vintage Fair which starts tomorrow. Its a great set of modeling poses.

None of the other fighters dared to have as long hair as Ethelinda. But they did not have her skills and also not her problems. There must have been a tree somewhere in her family. It was not really clear if one of the grandmothers of her grandmothers was one or one of their mothers. But her hair was way thicker than the hair of others and sometimes she grew twigs. So everyday she had to search for new buds and in spring she sometimes had to deflower herself. 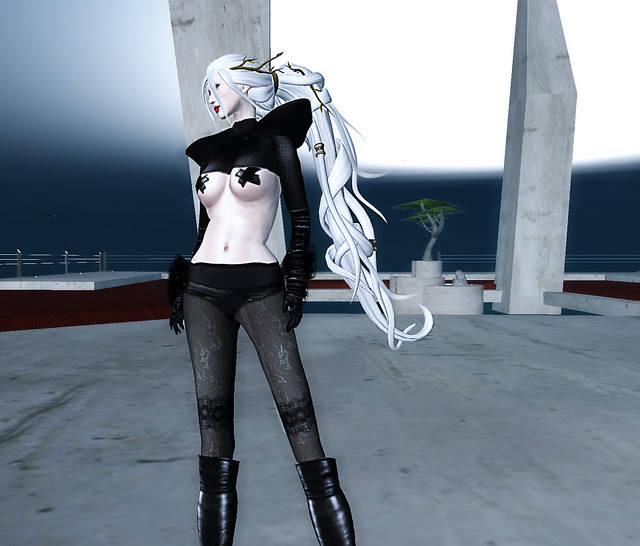 The Dewi pants belong to the latest collection of the MIAMAI Blacklabel. The Ansiotropic jacket belongs to the same subbrand of MIAMAI. Both items are stunningly unique. The pants are made of very thin cloth which reminds on stockings. But they have panties so everything is covered as it should be. At the sides the trousers have some lace made of prims. The Dewi pants are also available in silver and come on the pants and the undies layer and the set contains also socks so its possible to wear them in highheels. The jacket could be worn like on the picture or with some primparts around the hips. The gloves which come with the jacket are great. They look like being pulled down a bit. It is also possible to wear the gloves without the jacket and to combine them with other clothes.
Wasabi Pills the store where the hair comes from recently moved. They now have their store on the Coraline sim. Captivity Co where the pose comes from also recently moved. Its now on Pluto.

The weather was perfect, the guests would arrive soon and her hair was as she wanted it. But suddenly Elise heared a frog. This was one of the worst things which could happen. A jazz concert with the constant croaking of a frog would be really annoying. First she tried to spot it in the water. But there were only fish in the water. The croaking seemed to come from an other corner. She allready started to nestle nervously at her necklace. The frog would ruin the whole concert if she would not find it soon and she had put so much work into the organisation of the event, but had not supposed that a frog could ruin her plans. Elise searched and searched finally she decided to take her glasses out of her clutch maybe she would find the frog with its help. She did not find her glasses in her clutch but a frog. 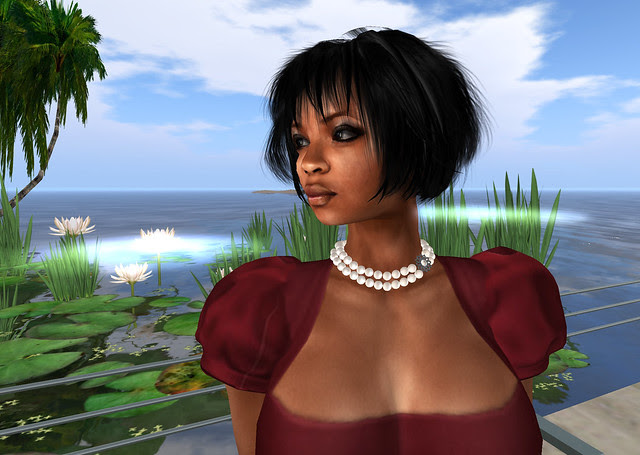 Eboni is the latest skin release from ND/MD. It is available in four skintones with four makeups in each of the skintones. The sets also contain tattoo and underwearlayers for the cleavage or pubic hair. There are also several shapes available which fit to the skin. This is the skin in natural. Moonlay one of the two designers and owners of ND/MD painted the skin nearly completly. Only for some parts of the face he used textures from a picture. The quality of the skin is amazing. Its possible to use it for many different looks it only depends on the hair and the other accessories which are being used. I decided to create a classical look. For that I choosed the shimmy dress in red from Icing. As accessory I choosed a necklace from Icing too. Its a simple pearlnecklace which fits to many dresses. The clutch belongs to an other dress from the same store. 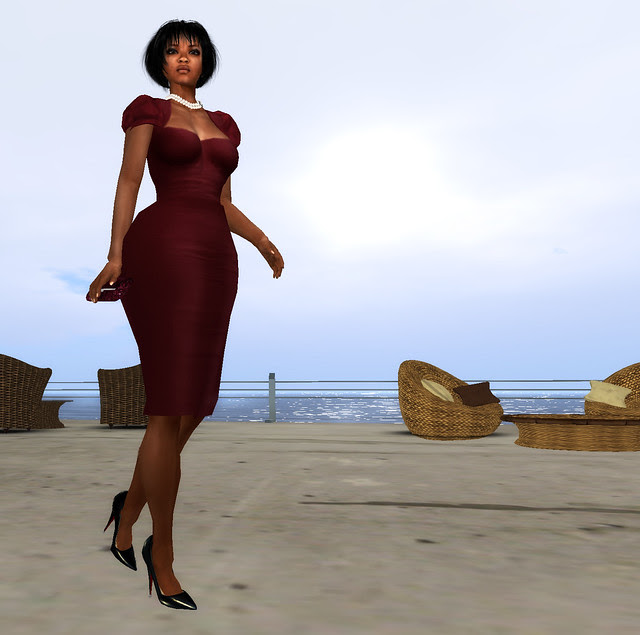