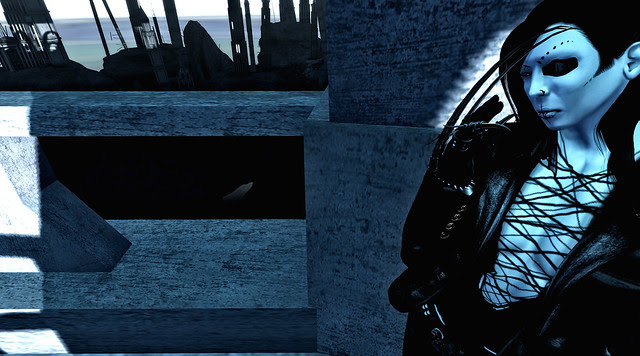 I am
your last thread
the one that lurks
in the shadows as you walk past
confidently
and powerful
and innocent at least you
strive to the slaughter
my little lamb
of god. 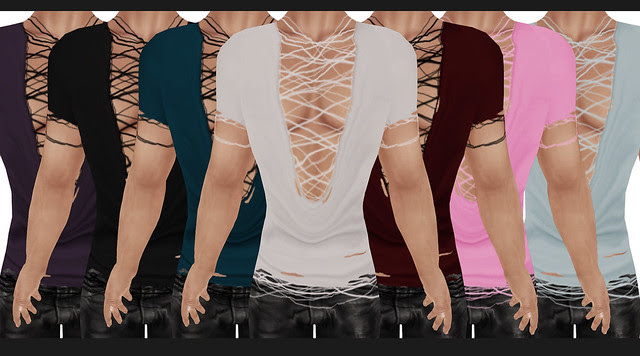 This post, and also the first picture, has been inspired by quite a variety of items, the most powerful most likely being ~Tableau Vivant~'s latest release, the Adam skin, with its more-than-awesome non-eyebrow option. I have to confess that I was rather skeptical in the beginning, but after I considered how easy it is to create extraordinary looks with little effort, I was convinced. In this case, Nuuna's awesome eyebrow collection was a great help, and an inexpensive one, too! With a mere 200 L$ for 22 different brows on tattoo layer they're really a must have for everyone that likes to toy around with the subject.

Since it's my last thread of this year, it fits nicely that it's gonna be about Last Threads, too - in this case, I'm talking about A:S:S's contribution for this weekend's LVE. Available in 7 colours, the artistically shredded and torn shirt goes well with both glamorous and grungy styles and is unisex, too! The special price for La Venta Eventa is just 40 L$ for a single shirt, but the Last Thread's gonna be available in store after the event, too. The awesome claws I'm wearing are one of the newer releases from the superawesomedroolalicious jewelry store : Amorous : and have lots of functions (apart from looking gorgeous): you can hide and show the claws or choose between a plain claw option or another version that has additional, small claw-rings on thumb and ring finger.

That's it from me for this year - thanks to all of our followers for some truly great 12 months in the blogosphere! Slip well into 2012... I'll see you there! <3

Loving the tweed this season thank you very much! and so the new release outfit from Vero Modero was a huge hit with me! detail on the fabric is superb too although not clearly shown in my pic as i've added a bit of opaque and sepia to give it a little vintage feel.

I happened to stumble across this cute little hair & skin store which is new to me and going to be a firm favourite too I reckon! there aren't many hair styles to choose from at the moment, but what there is I love and for only 100L for the hair I certainly can't complain. Oh p.s Fashionably dead has a half price hair sale too if you're a hair junkie like me.... woot!

Oh yes Woot! being a huge fan of all things WOot I adore these tibetan looking wood bracelets, there is a set for the left & right although I'm only wearing one set in this picture.

A few of my favs from the Christmas XYROOM

Waaaaah!! way way too many things to blog so little time! so I'll cut the waffle (well as much as is possible for me!) and tell you the things I think you should know about these items. Let's start with the hair which is a current subscribo gift at Exile which also has another style in a black colour.

The biker jacket from Skifija has a colour changeable hud which literally has a million colours and modifiable options and makes for most adaptable item in your inventory (unless of course you have shoes from Skifija too which mostly also offer this hud).

The top has a prim collar which I can only describe as an amazing cleopatra style bib collar - would have loved to have worn it but it didn't look right with this jacket, plus I like the halter-neck look too so in effect you have two looks in one.

These gorgeous shoes remind me of being a small girl and clomping around in my socks with Mummies shoes on (much to her horror)  I love them!! and the socks have 18 changeable colour options. last but not least is the shape which is also an XYroom special and comes complete with a bikini and physics i.e bouncy boobies!

Reading was always one of her preperations. She spend a night before she started to work on reading about everything humans did not like. Her black eyes gliding over the lines of letters and her thoughts focused on finding ideas about how to cause chaos and anger. Those feelings were the ones she lived from. She sucked them in with her beak like a perverted big version of a bumblebee. 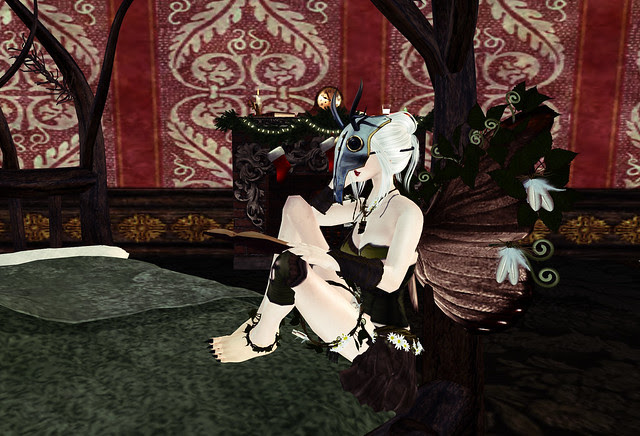 She was well prepared for her work, her feet were clean so that she would not leave any footsteps. She only visited the houses where people lived who did not believe in Santa Claus anymore. It would not have been right to mess up his work but those who did not believe anymore in the magic of christmas were her victims. She went into their houses and then she started to exchange gifts. It was her fault when women got a vacum cleaner as gift or when men got their 138st tie. Of course she took care that children got boring books and clothes which itched. She was really good in her job. And she caused so many arguments each christmas. But she was simply so hungry. 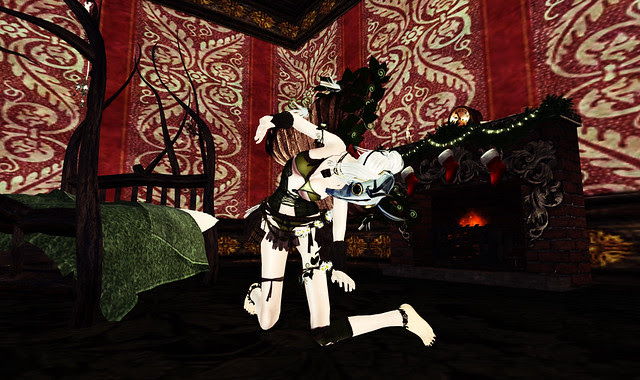 There are so many amazing gifts among the giving circle ones. The fireplace is a part of the gift from the looking glass. Its a very lovely one and the socks let it fit to the season. The bed from Mole End also is one of those gifts. Mole End belongs Evangeline Miles who is also the owner of Evie's closet. The bed comes in a linked and an unlinked version so its possible to take away some of the decorations if needed. At Angelwing is currently a christmas hunt going on. There are several wings hidden in the store which contain full outfits (for women). The Xylia one is one of those. It has many lovely prim parts like the bands for the ankles and the flute at the necklace. The mask is currently a groupgift from Contraption. It is only available at Christmas.