If cute, sassy, sexy dresses, mini skirts & tops are your thing then I suggest you check out Avale these are just a selection of 2 dresses that I think I totally fit that description. There lots of colours & styles available and I certainly approve! please go take a sneaky peak.

Another store new to me that I want to share is Handmade for these lush hairs at the bargain price of 80L!! The one on the left picture has an extension attachment which I am wearing in the pic. I love the range of colours and their quirky names such as Mirren, Murphy and Salade but to name a few!

Hippos were wise. Ayani Mimpfenbach knew this and so she used one of her rare hipposeeds to grew one. It wasn't ripe yet but allready able to give her advice. And advice was something Ayani needed. Maybe it would have been better to ask before she tried the spell which would make her a mermaid. But somehow she had supposed that everybody would have told her not to do it so she didn't share any of her plans. The result was very visible. Instead of swimming around and singing she got two horns. Not even like antlers or something she could somehow explain like treelike ones it were fin horns. It was not even possible to use them to hang up the laundry, of the tiny panda's she kept, on them. The only thing she liked about the horns was that they fit well to her hair. But nothing more. 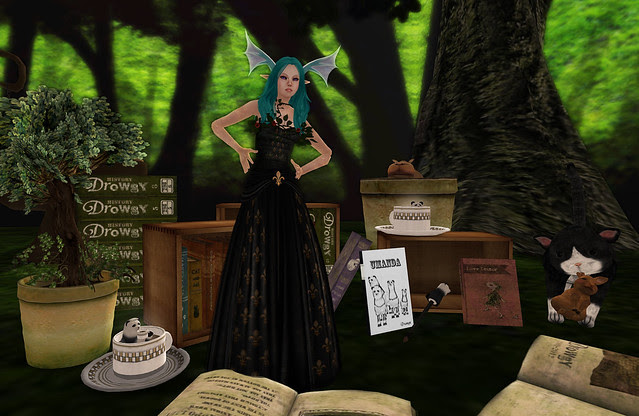 Ayani really needed to get rid of them. A Mimpfenbach with finhorns that was something which would have caused a scandal. So Ayani was studying lots of magic books to learn how to get rid of the fins again. Her little friends helped her. Well not always the pandas always insisted on getting their morning teabath and the cat normaly wanted to play a bit but things seemed to work well. At least that was what she thought. When nearly falling asleep because of the comfy sounds the pandas made in their hot tea Ayani suddenly realized that she was able to hear way better than she ever had done before. It was amazing. And she even was able to move her finhorns in the direction where a sound came from. This was very very intresting in her opinion. The sparkles on her skin glew a bit brighter while she was pondering. Was there a way to use this ability? She pondered while reading with less intrest in her magic books. Maybe it would be better to keep the horns? Finally she had the right thought. Some magicians got paid a lot when they helped people to listen to conversations which took part in some distance. She should be able to listen to that kind of conversation too. Ayani was right about this and she did not need long to start to use her new talent. She actually became one of the most successful spys ever. She got called the living unidirectional microphone. 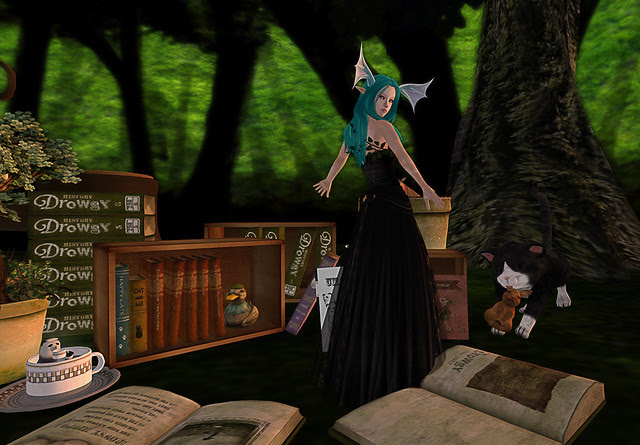 The petites avatars are just lovely. They have been invented by Yabusaka. He made the system very open so other stores are able to develop items for those mesh avatars, which are as high as a boot and work with normal poses and aos.
The Royale pack from Fallen Gods Inc. comes with three different skin versions and also three versions of the dresses. With the help of a hud its possible to choose between different makeups and with an other hud its possible to choose if the avatar should be full bright, smile and some more things.
Many stores made allready items for Petites. The hair on this avatar comes from Wasabi Pills. They rigged their Orion Hair so that it fits also Petite Avatars. As the hair is long it fits to every fantasy look. Frippery is known for their very detailed jewelry. They used their talents to build wonderful outfits made of roses for Petites. The roses are available in many colours and the sets contain a top and a bottom. The sparkles for petites are an other item from frippery. They are also available in many colours - the ones on the pictures are the ones in rainbow - and the sets contain animated and static versions.
The head fins are wonderful roleplay items from Material Squirrel they have the benefit to come in a version for petites and normal avatars in one pack. So they are great to use when roleplaying for example to be turned into a petite or a petite roleplaying to be turned big suddenly. Beside this they are wonderfully textured and scripted. There are actually several textures included which can be changed by touching the horns and choosing. An other nice extra is that there also animations inbuilt into the horns.
The whole decorations come from the Drowsy hunt. In this hunt you have to search for books which are spread all over the Drowsy sim. It took around two hours to find all 20 items but that time was definitly worth it all of them are very cute and the sim is awesome.
When Mavi Beck made the Picture Perfect poses she had no clue how well those would go with Petites as those were not invented when she made those poses. They are very elegant and great for fashion shoots.

Decorations: all Drowsy Hunt (0 L$ there are 20 Huntitems)

My favourites from the current round in XYROOM are these! in particular a flawless mid toned skin with pale lips by Av!Sage, Im really impressed with this skin I have to say and a test of which is how it suits different shapes, so I tried in on various shapes that I have lurking in m inventory and it suited them all! now that is testament to a good skin if you ask me. In this round there's plenty of poses and stuff for the fella's too which is always nice to see, in my opinion it's the best discount room that actually caters for the guys out there.

The smell of the gras was fantastic. It would be very good hay after being harvested. The mellaps would like it. The mellaps were mainly Sandra's invention. Not too many people knew about them and when somebody saw one by mistake they mostly thought that it would be an oversized sheep. Of course those thoughts were wrong. They were more undersized cows. Sandra loved milk but then she had to realize that she became allergic to it. First she tried several tricks. There were surely enough books about how to deal with that allergy. But all that helped only a bit. And she hated soymilk. She wanted the creamy taste which only got really satisfied by cowmilk in her opinion. Luckily she had a lot of knowledge about genetical engineering. First she tried to modify herself but this did not work very well. Of course she became able to deal with milk but somehow her toe- and fingernails- started to grow very much and somehow it also seemed like she was getting more hair on her skin. In a pretty pattern with white and black spots. When she had the impression that she was growing horns she stopped experimenting with herself and started to try to change cows. During her experiments she found out that she was able to deal with the milk from cows with long hair and that the curlier it was the better her body was able to handle the liquid. Sandra was very happy about this as it allowed her just to raise cows on a normal way without having to spend time in the laboratory. The success did not only make her happy it also made her rich and she always had to laugh when seeing the mellaps wandering around. They looked funny. 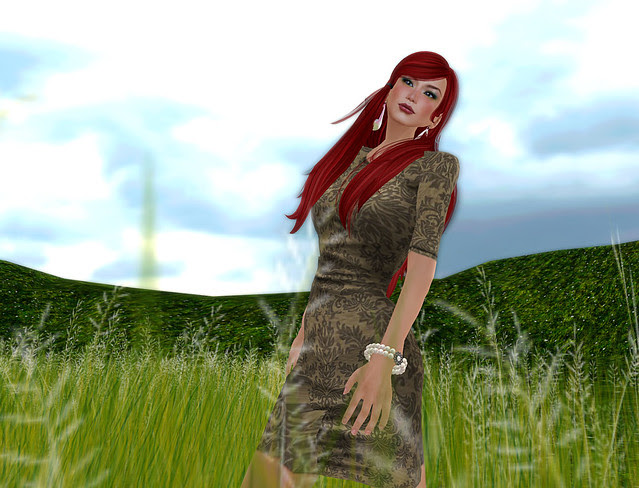 Halcali is a great store when it comes to elegant dresses and at the moment two of theirs are available as gifts. The green one with the patterns is their gift in the Candy Nail Mall which opened recently. The Candy Nail Mall is a mall for nails and there are also some pieces of art shown. The building is lovely and its definitly worth to take a look at it. Outside of the central store with all the nails is a lovely street with little stores. Halcali has a satelite store in one of them. The red dress with the fitting hat is the Halcali Valentines groupgift and still available in their mainstore. The Earrings come from Aura. They are made of mesh and available at the March Mesh Madness. The skin comes from the same store. The Zombie popcorn brand moved to a new location. It looks lovely and the upper picture has been taken there. Wasabi pills take part in the first round at that new location. They released a second version of their Monique hair. This one comes without braids. Parting the hair at the side normaly looks elegant and so does this hair. Purple poses also take part in the Zombiepopcorn Brand event. The pose on the first picture belongs to the ones they sell there. 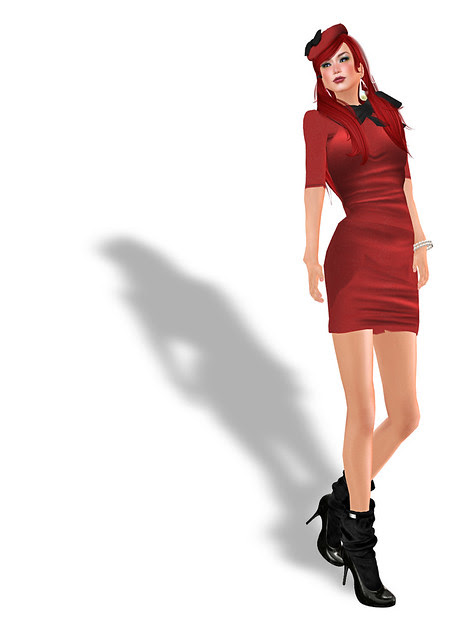 The latest theme at the monthly Flux event is Taxemermia, I challenging subject  to build a theme around no doubt, however I do believe there are some great items, none too wild and wacky but if anything I think the most creative is this outfit from 22769. It embraces the theme and is totally wearable with lots of items to mix & match and I never thought I'd wear horns but these are so divine how could I not?

Luckily it was winter. Else the scream of anger which was running through the mountains would have woken more than some birds. Luckily the bear in a nearby cave had problems with its ears else it would have been massivly disturbed in its hibernation. Thor was really angry. So he was on his way home. Frozen waterfalls started to move under his feet. Ice floating like cold lava. He was tempted to smash his hammer into the liquid but on the other hand he knew that he could split a mountain and he was still controlling him enough to keep himself from doing so. 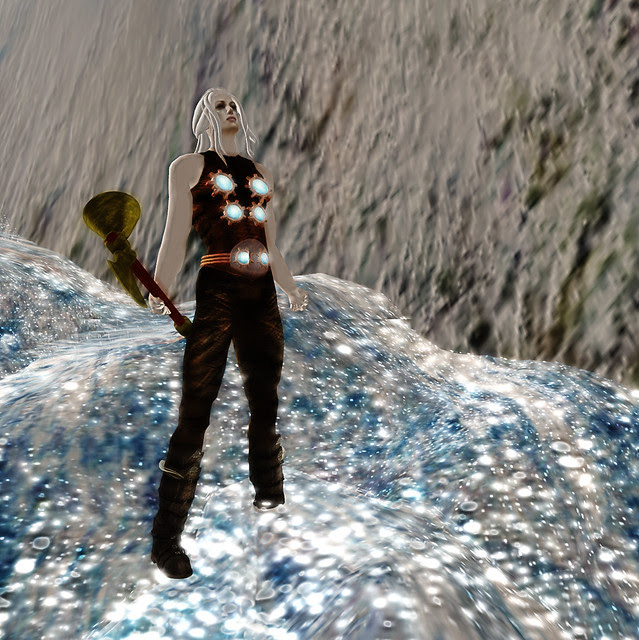 With an other jump he made his way down. This was the fifth mountain he crossed. And there were some more to come. With every step he became faster and the hammer in his hands felt lighter. He was on the way to fight a giant. The huge one had dared to insult the one the god loved. Now he would have to fight. Maybe that had been the reason for his missbehaviour. Many had tried to gain the god's hammer. But none of them ever had been successful. It would not be different this time. Thor knew this. The giant learned it on the hard way. 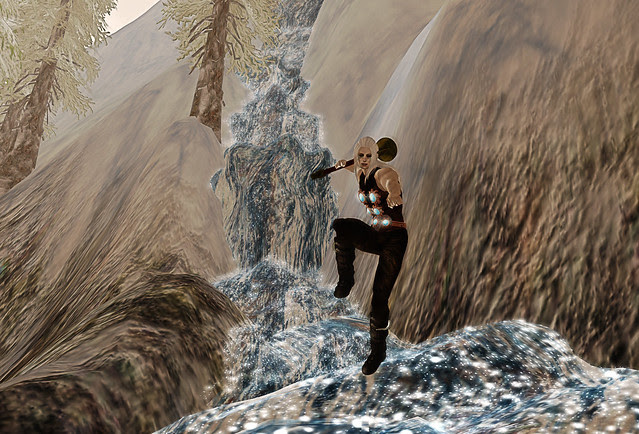 Steam the hunt is running for the sixth time now. 22769 takes part in the hunt and they created a great thor steampunk outfit. It comes even with a hammer. The other parts of it are a vest, fitting trousers a belt and a chestpart. All of those in typical steampunk colours. The chestpart contains some glowing lights and of course gears. The skin used comes from Fallen Gods Inc.. Its the angelus skin which is great for heros. Wasabi Pills made the hair. This is the male version of the dragon hair.

The picture has been taken at Suilven. With poses from a store which doesn't exist anymore. Its name was Niqotine Poses.
Posted by Dagmar Haiku at 2:32 PM 0 comments