The Right Honourable, the Lady Chillyfreeze McIce Frost of Icicleville and Snowfields was toying with an ice cube rather recklessly. How was that possible? Autumn leaves still on the branches? Kids giggling in the soft sunshine? Rain now and then, Autumn rain and not a pretty snowstorm, as it should be? She dropped the ice cube and started drumming her fingers on a delicate table carved from pure frozen fairy tears. She must have been really impatient as the table broke into a million pieces a moment later. "Enough is enough! Something must be done! The world has to suffer from cold!" - Lady Chilly was furious by now. 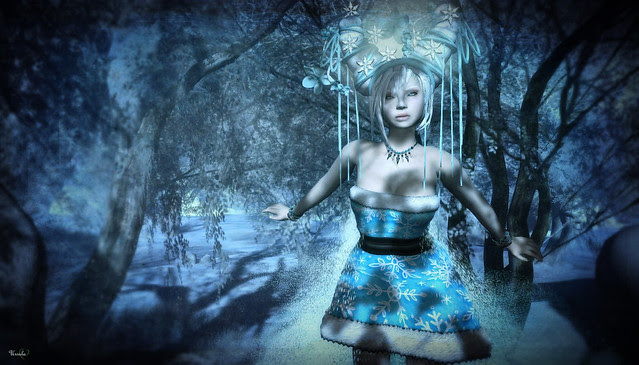 The inhabitants of the tiny mountain village woke up in the next morning and they couldn't believe their own eyes. A few hours earlier they had enjoyed a peaceful, mildly warm late Autumn day... and today it was Winter, cold and snowy Winter. "Ohhh, look! Snow! Where is the sled? Let's go out and build a snowman! Mother, can I take a carrot from the pantry?" The village kids were apparently happy and undisturbed by the sudden weather change. Not far away, feeling an absolute failure, Lady Chilly decided to give up her high status and apply for a job. A nice job, preferably in a lovely warm room. A secretary, or maybe a cook.

Ready for an early Winter, at least in SL? Here are the goodies.
Skin: "White Queen" by Adore and Abhor - a stunning freebie from the Marketplace (0 L$).
Hair - Les Sucreries de Fairy, The Frozen Hunt gift - 0 L$. One of my absolute favourites in The Frozen Hunt, a wonderfully elaborate hairdo with many lovely details, a "must" for anyone wishing to impersonate any frosty critter, a snowflake fairy, or the evil Snow Queen from Andersen's famous tale, from now until the end of the winter season.
Eyes: "Resin Eyes" in Celadon by Sterling Artistry - monthly group gift (0 L$). The group is free to join, and - despite the fact that I generally dislike group tags in SL - I must admit that bouncing around in SL under the group tag "oOo shiny!" is hilarious! I feel like a greedy wee cartoon pixy every time I put it up, and I giggle a lot... thanks for the fun, Silverr!
Dress: "Frozen Blue" Dress by nMn Design, The Frozen Hunt gift - 0 L$. This is a real treat, as there are three more lovely winter mesh dresses in the giftbox, and one is prettier than another!
Snowfall train: part of the "Frozen Dress" by Ashmoot, The Frozen Hunt gift - 0 L$.
Jewellery: "Knight of the Night" by +:+WTG+:+ - November group gift (0 L$). It will cost you 100 L$ to join the group but these are Lindens very well spent, as the monthly gifts are fabulous, and there are also many lucky boards around for group members only.
Pose: "Caliope" by FlyLily! Poses - not available any more.
Posted by Ursula Floresby at 5:59 AM 0 comments