She was the best chemist in town and a vampire. Of course she could have done the whole good vampire thing. Helping humans to be able to deal with those of her kin. But that was way too boring in her opinion. And she wanted freshblood not the stuff the "good" vampires got from hospitals. So she used her talents to create drugs for humans. It was so lovely when they were finally addicted and willing to do anything just to get more of her creations. 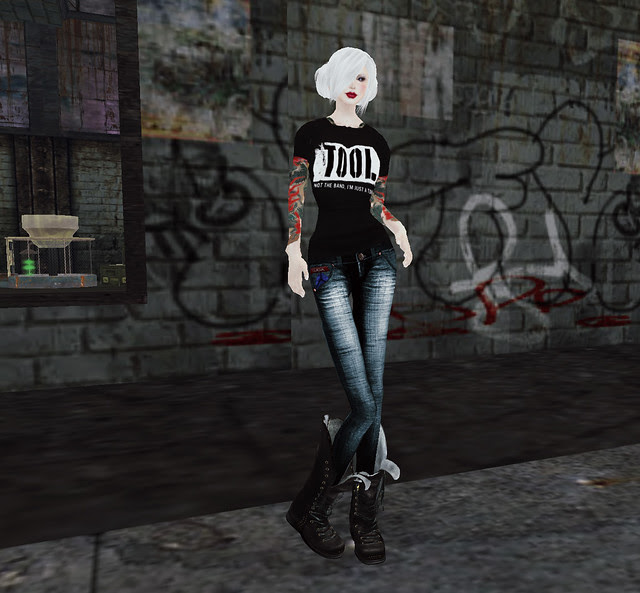 Death Row Designs has these awesome boots in their midnight mania at the moment. They are loose and look like they could be used for walking in the mountains or for hard physical work. The boots have a resizescript and are unisex. The shirt and the trousers are the gift for guys from LL Creations and Cudola in the twisted hunt. Because of the shading the t-shirt also fits women. Its the same with the jeans.

Elaine moved her fingers to her collar to play with the small skull which was placed in its middle. She was alone in the church. It was one of these days, she was able to feel it, later she would have to fight. Erasmus her scholar had been arguing with an other one scholar the whole week. Elaine never cared about the theories Erasmus developed. She only was his fencer and would be the one who would fight for him to prove his theories in an ordeal by battle. When she recognized that she most likely would have to fight soon she had started to train ten instead of eight hours a day. Her opponent would be the swordsman of the other scholar. 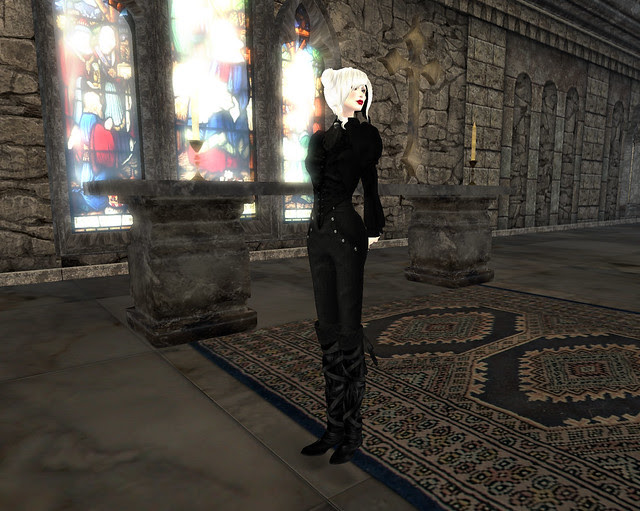 He was new at the college. Elaine hoped that none of the other fighters had told him about her abilities. But even when they had told him about her abilitly to jump onto rapiers and to balance on them he would most likely not believe it. She knew that Erasmus counted on her abilities. Much more of his theories were accepted than of the most other scholars, just because of Elaine's skills with the rapier. He had found her while he was still a student and she around four years old. When seeing her fighting with boys in her age and even defending those who were two yearls older than her he decided to make sure that she would get all the training she needed to become his fencer. Although it wasn't illigal to have female fencer it was something which frowned upon. But he decided to give it a chance. He had known that he would need a brilliant swordsman to get ahead with his scientific career. Else he would have only had the chance to teach the theories others developed. Erasmus and Elaine never doubted the method to approve theories with the help of a fight. It seemed just right to use an ordeal when two logically correct theories came to different conclusions about one theme. 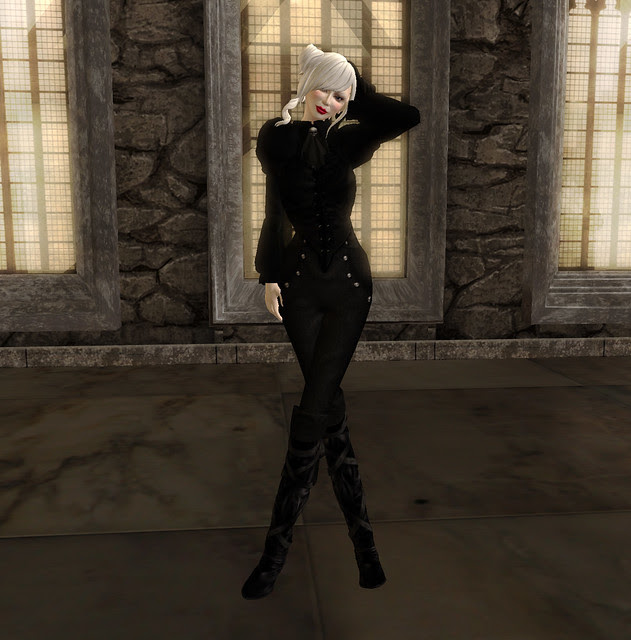 This suit from The Black Canary is called He Lurks in Darkness. I was amazed by it when seeing it for the first time so had to get it. It reminds me on a suit which is made for elegant fighting without having one drop of sweat on the forehead. The trousers have high waist. They are worn with a black top with sleeves at the shoulders and the wrists. The collar has a little tie and is closed with a skull in the middle. As all clothes from The Black Canary it is an very elegant outfit. It goes well with black flats but I decided to combine it with flat laced overknee boots. Those are sold by coco. The boots come with a hud which allows to resize both sides at the same time. The primparts of the suit are mod so it is possible to make them smaller or bigger if it is needed to do so.

The building in which the pictures have been taken comes from RKTF Design.
Posted by Dagmar Haiku at 11:42 AM 0 comments

In the realms of pure fantasy I am today in the most lacy racy gown which is a new release from Vero Modero . It bares an enormous amount of flesh & has a vintage feel with an almost Flamenco style quality, I defy any of you to feel anything less than sexy and desirable in it. It comes complete with dress, gloves, scarf and a wonderful headdress - not shown here.

So todays theme is Wuthering Heights, here I am  Catherine wandering the moors. Where is Heathcliff? why he is setting up picnic over there of course! since Wuthering Heights has been a ballet adaptation I found it only the more appropriate to use the most fantastic ballet style dramatic poses named 'black swan' from Isis . If you're looking for ballet style or dramatic poses there is a whole host of other ballet inspired poses there too and at 60L for 5 poses why not take the whole lot!

Nada was training for the big show. She was the only fairy in the black circus. First she had been afraid as she thought the others would have just offered her to join them because they planed to eat her. But they really seemed to like her and she found out that all of them prefered human flesh to fairy blood. So in all villages they went through one or two humans were missing after they left. Nada did not care she wanted to perform and the black circus was the best place to perform she had. She was a dancer and an acrobat. And she loved to show her abilities. After her the werewolves performed. Their show looked like a wolf dressage to the audience but Nada knew that the wolves were the nice guys who sometimes carried her bag when it was very heavy. She saw them argueing who would be one of the wolfs and who would be the animal trainer every evening. Of course the audience had no idea about the true nature of all the artists of the black circus they simply loved their shows. The artists loved their flesh. 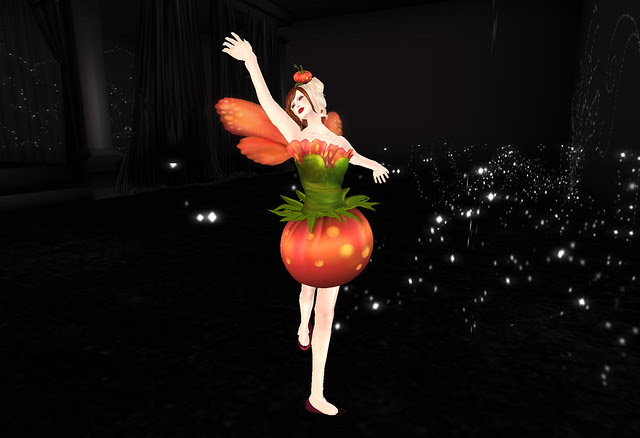 Evie's closet takes part in the molto sisters hunt. Their huntgift is a supercute strawberry like fairy dress. The skirt looks like it would have some leaves while the top has some asymetric ruffles. The set includes fitting wings and a fitting headdress. The pose on this picture comes from No Strings Attached. a:s:s released an other skybox. It is called momo's playground and although it has no doors or stairs it is just awesome. The ground looks like being made of black carpet. In the skybox are some shiny and glittery parts and parts of it are separated with a curtain. They skybox is available for 10 L$ until tuesday.

Eiren walked alone through the tunnels. It was warm and humid so she had wrapped her hair together in a bun. Most of her skin was uncovered anyways as usually. She was not allowed to cover the runes and symbols on her skin. 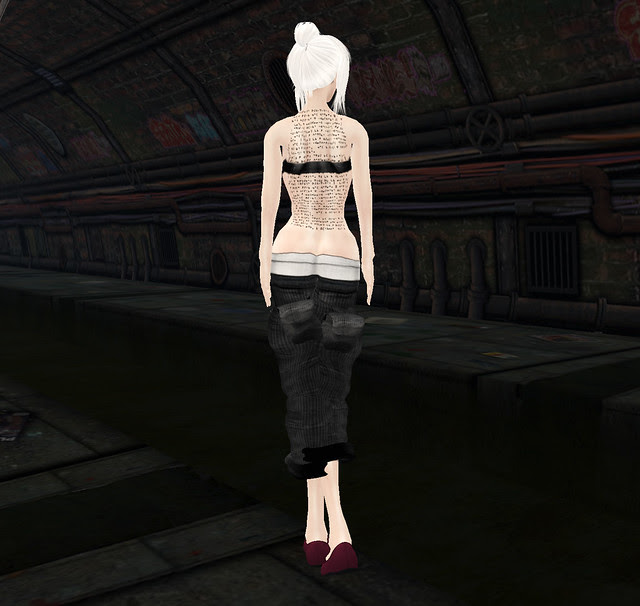 Paper was rare since the last world war. Most materials which could have been used to create paper out of them were needed to make food out of them. But it was still needed to be able to translate the symbols which were painted on some ancient machines. And they needed a way to transport the information. For some time they tried to carve them into stone but it was work which took a long time. 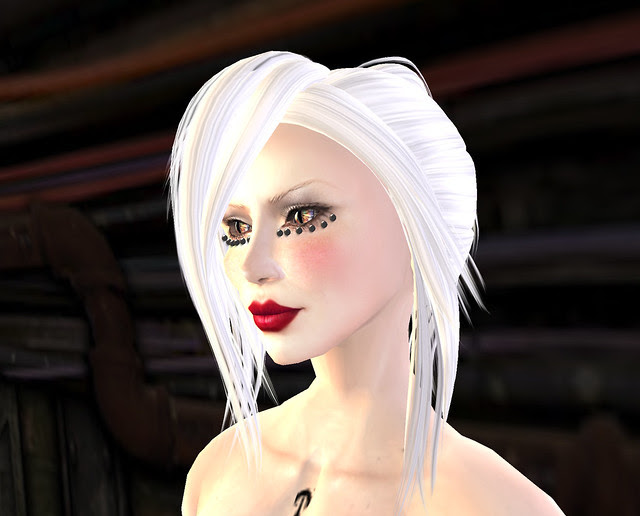 Then somebody who was trying to solve the lack of paper problem saw a woman with a tattooed chinese symbol on her body. First they tried to use animals to tattoo letters and symbols onto them. But those always disappeared quickly. So they started to recrute humans like Eiren. She was now like a living rosetta stone. On her front was the same text written as on her back but she knew the meaning of them so she was able to help the scientists who worked with the machines. She wore implants which made her findable when ever she was needed. Sometimes she felt a slight burning in them. In those moments she was not sure if they really needed living skin as canvas or if they were using all the living dictionaries for experiment. 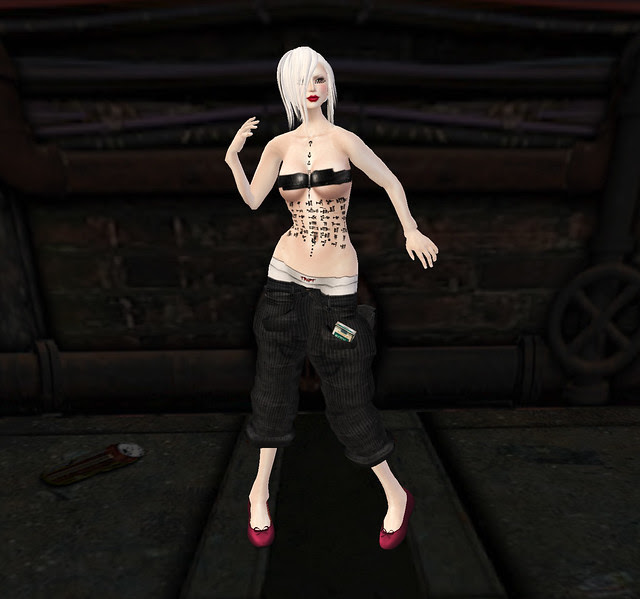 Virtual/Insanity released some new and some reedited stuff. For example the eye piercings. They were new textured. The set contains them in three colours and each of them for the right or left side or at both sides at the same time. The tattoo with the runes can be worn with or without the part for the back. The package includes it in a lighter and a darker tone. Its a great roleplay item. Those runes could be so much like magical spells or a curse which has been inherited. The new papilloma belly piercing looks like a small butterfly for the belly which is surrounded by several pearls. As the other sets this one does not only contain one colour but a black and a silver version. Virtual/Insanity also takes part in two hunts at the moment. The twisted one - they were so cool and put a list of hints in the store to make hunting more fun - and the american bazar birthday hunt. So its definitly worth to take a look at that store.
The trousers are the huntgift of Trapt! in the twisted hunt. The primparts have a resize script and the texture of the cigarette box changes on touch.

Posted by Dagmar Haiku at 7:12 AM 0 comments

American Bazaar is celebrating it's first year Birthday and to do so have decided to do a hunt. The American Bazaar birthday hunt (ABBH) is in full swing the list of participating stores and hints can be found HERE. It will be hunt is on until 30Th September and is going for a glam theme for the celebrations.

I dearly love this pretty little cocktail number which is 22769's hunt prize. There is also male outfit included in this prize. As soon as I saw the dress I wanted to do a vintage theme with it. The colour is vibrant and fresh, it's kind of a Raspberry tone. I particularly like the shape of the skirt, how it cascades with folds of fabric and a pretty net underskirt layer.

To complete the rest of the look I hopped along to JetDoll which in my opinion has the best Vintage range in SL to pick up the glasses and hair, and the fabulous shoes are from In her shoes.  The skin  is from Jesylilo who is also participating in the hunt but this skin is not the prize it just happens to be one of my favourite skins and goes really well with this look.