Some other highlights from this excellent Depraved Nation Hunt! 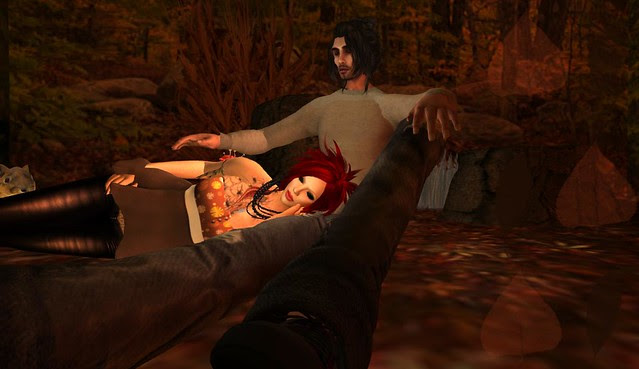 Of the best things about autumn, Christophe would have found it hard to pick just one favourite. They all interlinked, as all natural things would do. The days were shorter, so the nights, and the twilights were longer, that beautiful tone which bathed the woodlands, making long walks that little bit magical. The world was sighing after a busy and productive summer, the trees and the creatures settling down, preparing for the long winter sleep. The nip in the air meant he would wear his woolen jumper, knowing she would want it later when night fell, but for now, with the mellow light dappling the glade amid the falling leaves, she would still be dressed for the last of the warm days...

She knew as she made her choices that morning exactly what she would wear, the warm tones matched her mood, and the technicolour foliage they would walk through. The sun flooded her rooms, warming the air. It would be cooler out in the woods, but they would stick to the sunlit paths at first. As the evening drew on, he would let her borrow his jumper, she knew it, and grinned to herself with this knowledge. For now she could relax into the soft carpet of leaves, resting her head in his lap as the spiders hiding in the leaf litter emerged, spying with their many eyes their fellows, inked into her skin. 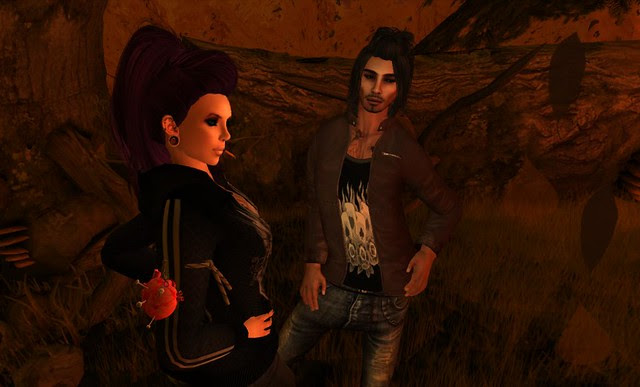 With mists and mellow fruitfulness, autumn lured even the most urban of foxes out into the wilds of the woods. Their city clothes stood up to the task remarkably well, her hoodie was thick and warm, the leather of his jacket kept out the chill and the damp. Jeans, as ever, were suitable anywhere, though Sam would occasionally whimper when the drop crotch of his jeans snagged on a bramble. Anya chuckled softly each time this happened, catching his hand to pull him free. They had avoided the rangers, her smoking would not go over well at all, though she was convinced it would take days of intense flame to make any difference to the damp carpet of leaves beneath their feet. They had walked for hours, taking in the views, and searching for conkers, soon it would be time to head to the clearing, and join the others at the bonfire, but for now, this tranquil world was theirs. 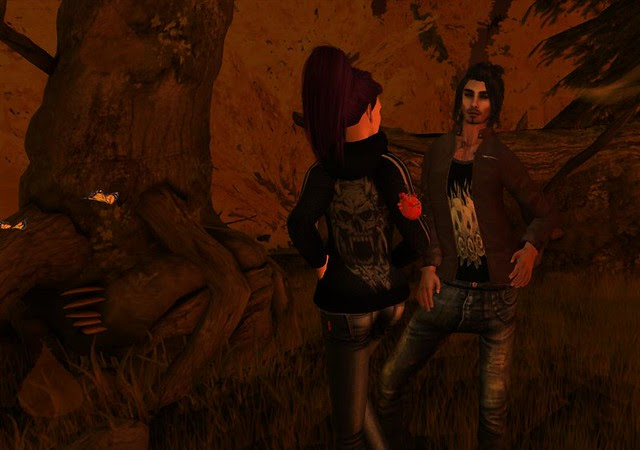 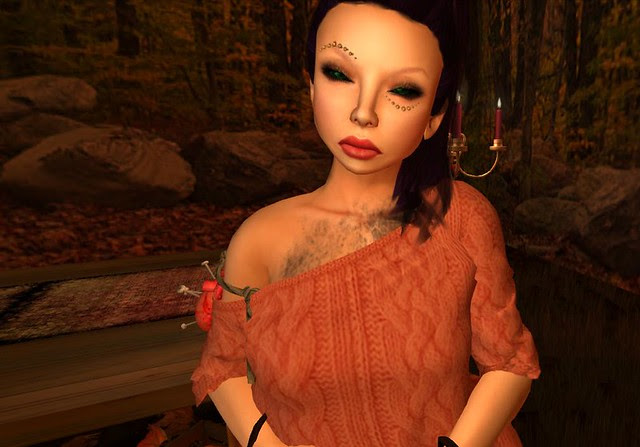 Tabitha waited in the clearing, her table was ready, candles lit. At long last, again it was her season. Each year rolled around, trials and tribulations threatened all chances of success, of life itself. As she played her part, she had to trust the others to do theirs. Without them, she could not exist, and without her, in turn, neither would they. Deities though they were, they could not exist alone. Long ago, she had been known by another name. As the years rolled by, Demeter had come to mean less to the people for whom she provided such bounty, and with which they had honoured her. She had made little concession to the changing years, save the name she gave to people. Tabitha tripped more easily off the tongue, and the knowledge they were dining with a goddess may have made her guests feel ill at ease. That wouldn't do at all. This was the celebration, the feast of the food they would bring, the ceremony, symbolic as it now was, of the last golden night before the long darkness of winter. 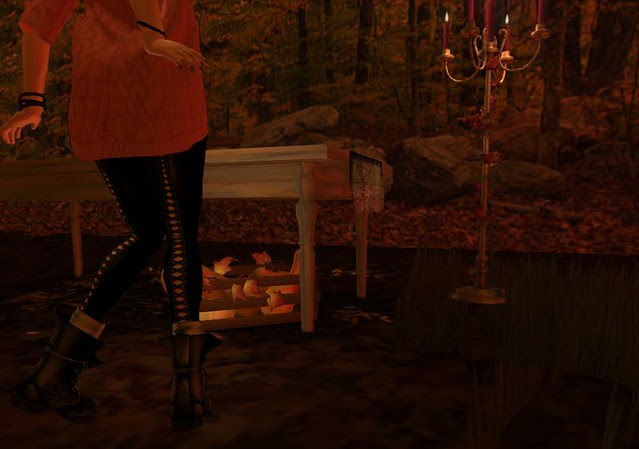 Autumn is here!!! Remember the Autumn Effect Hunt is gridwide, and has gifts for ladies and the gents. Around 100 stores - all gifts are 0L$. The items are really something special - as Id hope these shots show, and there's so many more you can find and enjoy. Hunt is on now, and runs until 15th October.
You can find the SLurls, Hints, and Rules here ...
http://depravednation.com/the-autumn-effect 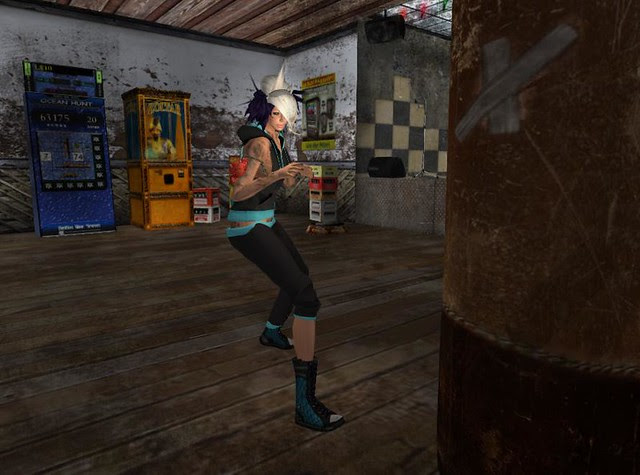 Maria spent many hours each week in the stinking sparring room in the old gym downtown. Not for her the shiny and glitzy gyms with their lycra clad members, jogging for fifteen minutes on a treadmill before stopping for carrot and mango frappe with an overpriced biscotti on the side. It was grimy, sure. You wouldn't want to lick any of the walls, but that was hardly why she was there. It was the place in the city to learn. 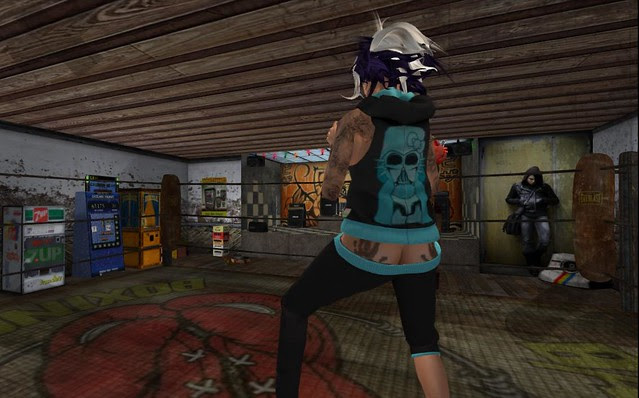 Far from the safest areas of town, the gym was a well kept urban secret. Old men gathered by the doors, sharing stories of past victories, grumbling about defeats, arguing the toss from morning till night. They kept the pretty boys away, letting only those there for the sport, and not the swagger, through the dented doors. Of course they had been skeptical at first, What was she doing there? Here to clean the place was she?
Ha
ha
ha
The first uppercut to the jaw of the one laughing loudest had put an end to that. Now they saw past the superficial, the cuteness of her clothing, however crazy it may be, to the talent. She was there to work, that was obvious to them all. Even with a babyblue and bowed legoesque villain on them, her clothes suited the task. She could move in them, could sweat, could train. 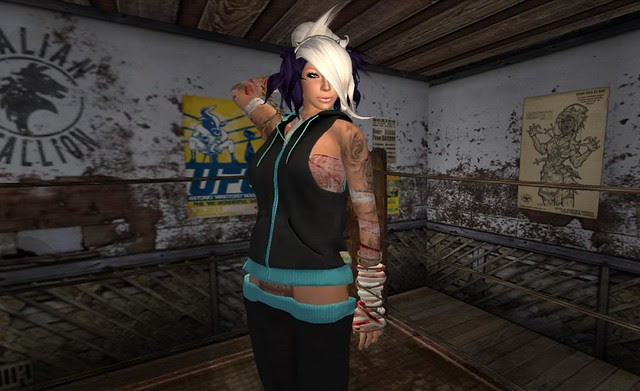 *Rubs hands with glee* It's hunting season!!! With Twisted in the bag - didya spot the survivor reference? - though you still have until the end of the month to finish - it's on to the next for me. Depraved Nation is at it again with The Autumn Effect hunt. It's gridwide, gifts for ladies and the gents, with around 100 stores - all gifts are 0L$.  It began on September 15th and runs until 15th October.
You can find the SLurls, Hints, and Rules here...
http://depravednation.com/the-autumn-effect

Shown here is the female hunt prize from S u g a r . All MESH tracksuit. Its possible to wear the pieces separately, as alpha layers are included for both together, just top, or just pants. Included in the gift are sizes XXS, XS, S, M and L. The design on the back of the top is very cute, but not twee, as its not baby pink! The first and second pictures here are a nice example of how the mesh moves with the body, these weren't done with carefully arranged static poses, but snapshots mid motion using the animated gym equipment at this location. Nothing poking through, no alpha mishaps. I also really like the rolled up trouser leg, it takes this another step further from what you may expect in sweats.

Email ThisBlogThis!Share to TwitterShare to FacebookShare to Pinterest
Labels: depraved nation, S u g a r, The Autumn Effect

It was time for the opening. Nistra Ophelia Sami had a good feeling. And so did her little friends. They were running the salon for private music recommondations now for some years and with every year they got more customers. Many of them were musicians who had lost their creativity. Nistra somehow knew what to let them listen to inspire them. 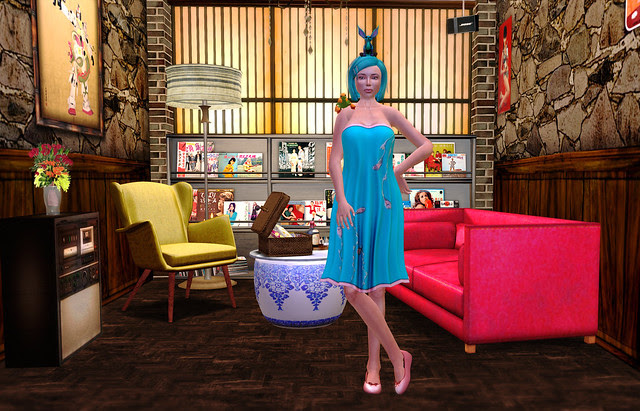 It was a rare talent and so she could have been able to demand high rates. Of course she didn't do so. Helping musicians to create what they could do best was what she had been born for. Now and then people in extra fancy clothes visited her little store and tried to make her work with them. She rarely was willing to do so. Not because she disliked the record companies those people worked for more because the effects she caused on the people they sent to her were to odd. At least in her opinion. It was like she made them burn so that they made one or two songs which were nice and after that even she wasn't able to inspire them anymore. And who had ever heard about a muse who cared to create one hit wonders? 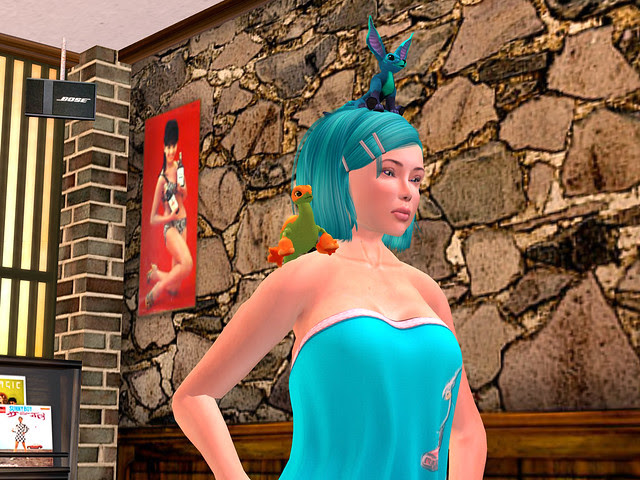 The wonderfully creative and talented Aphrodite Outlander is back to the grid not only to move her first store Perse (which had some really great boots) to the marketplace but also to open a new store for mesh clothes : L'APH. The fleur grande dress is one of the first releases from there. It comes in all the standard sizes and is available in a wide range of coulors. For those who love shades of blue and green the blue dress is perfect. It has a pink border which allows to combine it with accessories and shoes in the same tone. The ones used for the outfit are pretty old but still great and come from Ingenue. Being made of sculpts their price is reasonable.
Booshies does not only take part in the finding fab free hunt. They also got new Lil'PetZ in their gatcha. The pet on the head is called Fentrili and in 6 different versions in the gatcha while the one on the shoulder is called Girecko and the gift in the finding fab free hunt which will run till the end of september.
The hair is made by Wasabi Pills. It is unrigged mesh hair which allows to resize it. The hair comes with a hud which allows to choose different colours for the hairslides. The cut goes as well with kawaii style as with business outfits.
The poses belong to one of the latest releases from Purple Poses. 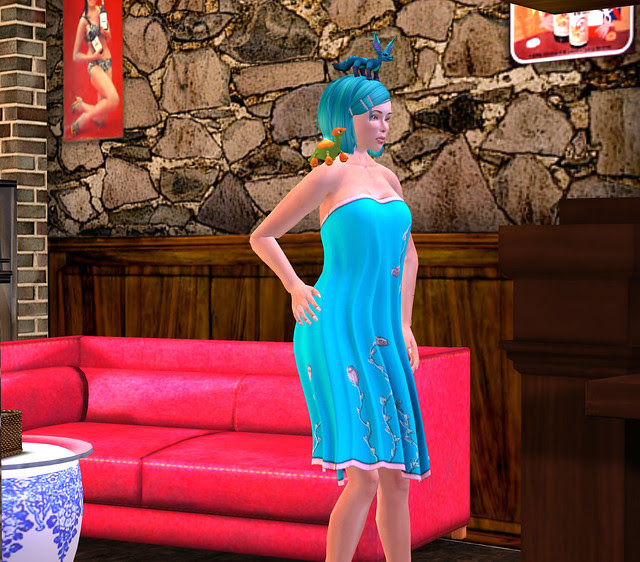 The pictures have been taken at Takeuti
Posted by Dagmar Haiku at 11:48 AM 0 comments