I absolute adore this flapper dress from Sassy which comes with the feathered headband and is one of the current offerings to the monthly discounted event 'Brandy's Attic'. Now I know the hair from Jetdolls is from a very different style decade and If i'm being true to the flapper style I should be wearing a short bob, but hey I love this hair and I don't feel it looks at all out of place (pssst sorry but this style seems to have been removed from sale). Following the theme is this exquisite Art Deco jewelry set by Eclectica and I also think this skin from Modish fits the glamour very well indeed which is currently on offer for a bargain 89L at yet another discount event 'My Sale Boudoir'. I just can't get enough of all these events!

In the morning when she woke she thought that all had been a dream. Padme had not managed to get into the bed and slept on the floor in her house. When she first moved there she often had strange dreams because of the octopus on the wall. For some time she had thought about painting over it. She even had tested how much colour it would need to cover it. But it didn't work. It wasn't possible to cover the picture. After a while she managed to deal with the dreams and it seemed like her life changed. 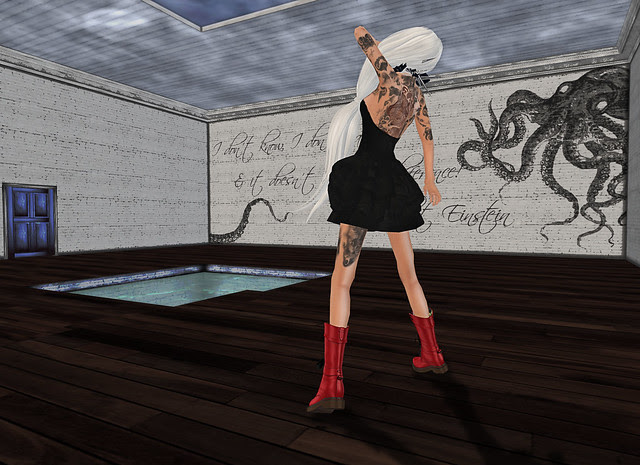 The evening in the casino was just typical. She did not know why she went there and why they let her in. Boots and a short dress with a big tattoo really did not fit to the dress code of a casino at least not of the elegant one she went to, but maybe they tought that she would be one of those rich girls who tried to look like they would live on the street. Padme wasn't rich at all but after the night in the casino she was. Her luck was insane. They had to give her a bag so that she would be able to carry home all the money she won. It felt so good she wanted more and more and more. The painted demon on the wall on her house was fine with this and most willing to help. 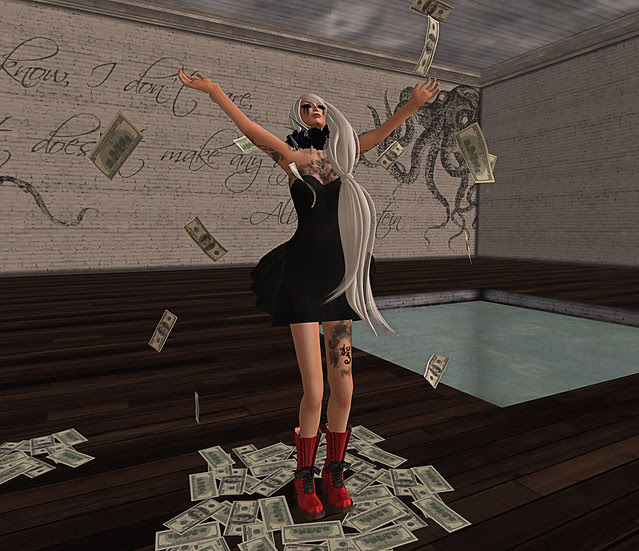 The festival of sin has started at the weekend and the items there are great. It is intresting to see how sins can inspire creators. Vanitas Vesture made short dresses with a bustle for the back. As all her dresses the textures look great and she manages to create elegance with a simple cut. The dress is available in many colours and the skirt is partly made of mesh, which even fits a small avatars. The makeup and the neckdress belong to a set Miamai sells at the festival of sin. The tattoo comes from Essential Soul. It is unisex and the set contains it in three versions - fresh, faded and faint. Lap has always been a posestore I liked and their greed inspired pile of money poses are fun for pictures. They contain a 5prim poseprop to rezz and money to wear and some piles of money as decoration. The skin from Aura is awesome in my opinion. It is available in five skintones. From light to dark those are Milk, Cream, Honey, Caramel and Expresso. The one on the pictures is the skin in milk. It is available in three makeups. The used one is called used and does not look like there would be much makeup used just maybe a bit of lipgloss and some great eyeliner. The other two have a bit more makeup. There are demos available so its definitly worth to test this skin. Red boots are great to show off and the ones from gos mix the cuteness of laces and bows with battle boots. Which makes them perfect for every roleplayer princess. They are made of mesh and included in five sizes and a non rigged version in the set. With the included hud its possible to change the colour of the inlet of the boots between a flowerish one and black. The boots can be worn up or pulled down. When worn in the pulled down version there is a shadow of the top on the feet. The alphalayer which came with them was too big for my avatar. But the alphas from Duh, do the job well else its always possible to make own alphas. The poses on the lower picture come all from adorkable poses. They belong to the touch me and the legs set which are both also sold on the festival of sin. Pestle and Twig made the skybox which has been used at the first pictures. It has 63 prims and looks quite cool. It even has a door with a little entrance in front of it. The squid on the wall and the pool in the middle fit well together and which isn t visible on the pictures the texture on the ceiling is animated and looks like the water would be reflected. A very nice idea. It has a 21 x 21 footprint so it fits also on small parcels. 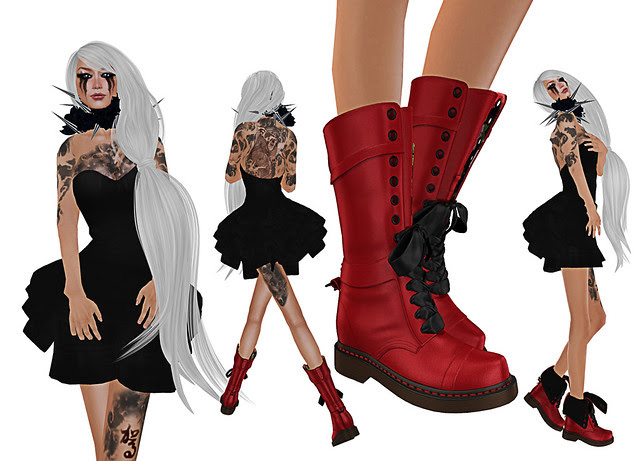 I'll tell you what is going on! well there's a sale on hairs at Tameless so I'll have some of that thank you, the hair in this picture is discounted but it's not in store it's as it's for the 'stuff in stock' event. Stuff in stock is a new event  and this round runs until 1st March, all items vary between 30 - 80L. Then there's a mini carnival hunt at censored where I picked up this lovely little denim mini skirt. Great new luckyboard goodies to be had at Bonne chance and Le Poppycock too....*dashes off to find more goodies*.............. 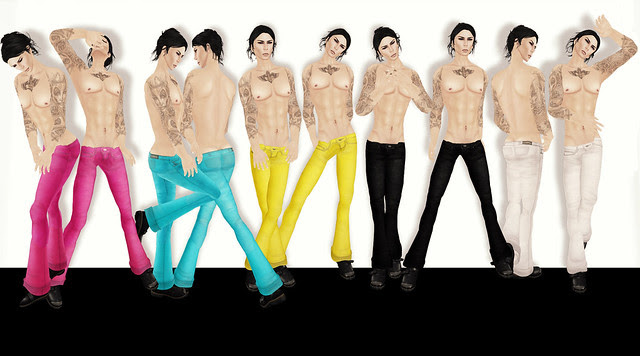 There is tons of poses to be found at the Festival of Sin - so many that I'm not quite sure if I'll manage to blog the majority of them - but we gotta start somewhere, don't we? Above you can see the 'She's so vain'-pose set from Estetica which consists of 10 poses; below, I tried to display the 'Legs Dork'-pack from aDORKable Poses, which also contains 10 poses and their mirrored versions. 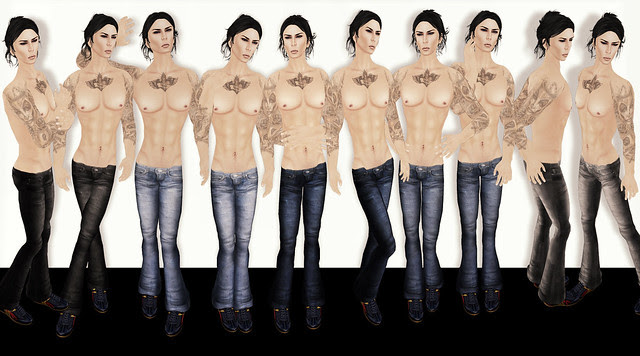 I know that I've blogged them before, but since I'm still totally and utterly in love with them, I clad my butt once again into [Cynful]'s Eve Britches, here worn with the flared cuffs (the pants also come with skinny cuffs). Besides, I promised Cynneh to make a rainbowy post with her pants - so Cynneh, here you go! 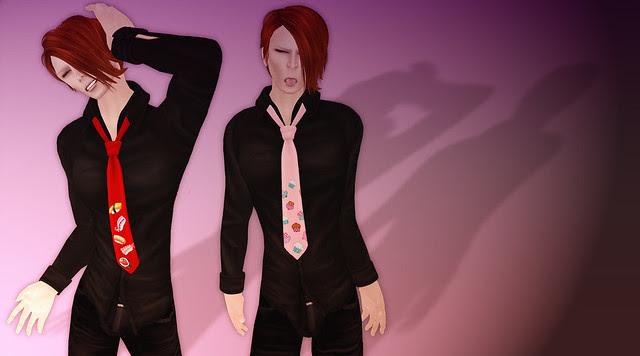 Ewww, this stuff doesn't go together, you think? You're wrong! Open your mind and eyes and have a second look at this selection of the more-than-awesome ties from Schadenfreude for the Festival of Sin-event. They come in male and female sizes, as standalone or with an attached collar to be worn with my beloved Oxford shirts - a HUD to match said collar with the shirts you're calling your own is also included. Make sure to stop by at Schadenfreude's booth to see more of the waffle-, sushi- and cupcake-goodness printed on sexy lingerie (soon to be seen here!) and their awesome mesh corsets! You won't regret!