Someone's in the kitchen... 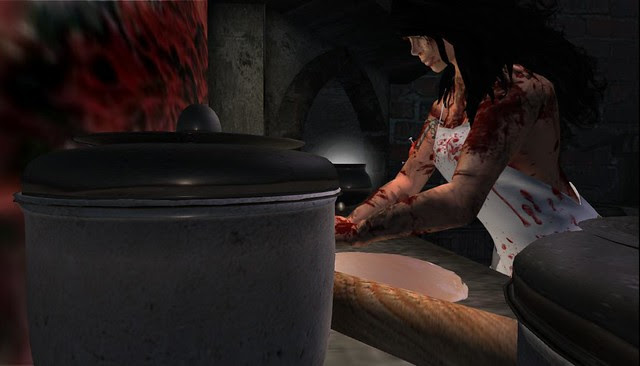 There was someone in the kitchen alright, well, what used to be a someone. That they were now in pieces was all part of the process. Dinah smiled as she worked, humming softly hmmm hmmmm hmmm. The messiest task was done, and it had been hard work, as ever. Firelight dancing on the blade as it wove before her eyes, the intricate series of cuts which always followed the coup de grace. Blood gushed, spurting across the tile from that first well aimed slash, spattering her face and skin, and her pristine white apron. Much had drained away of course, the thickening vitae puddling momentarily around her stilettos as it made its way toward the drain in the centre of the floor, to be collected in the tank beneath. The market had its demands, the city's residents needed meat to their taste, many now preferring this refined method of obtaining it at a price, rather than risking their own necks hunting down their prey. Stretching out a section of skin on the bench, Dinah would start to work at it, scraping lightly with the sharpest blade in her collection. The skins inked design had to be removed of course. Selling newly made leather boots, only for the purchaser to recognise the ink of a relative, well, that had led to the kind of destruction in her store that she could not afford to have happen a second time. Reaching into the pocket of her apron, smearing yet more blood on the fabric, she pulled out her watch. A soft chime from the bell over the door made her turn, the first customer of the night, right on time. 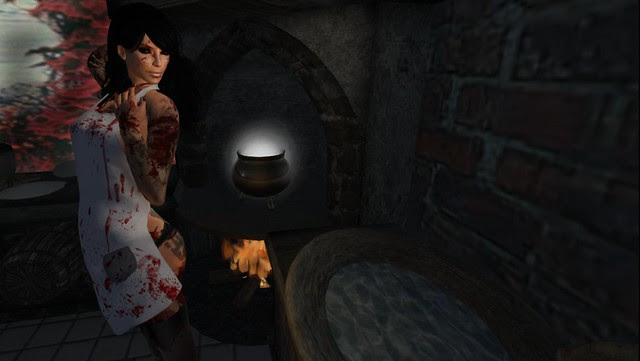 Yum yum yum what a bloody mess! More lovely dark things from +REDRUM+, and a bit of a tale from an actual roleplay scene. The bloody skin layers I have covered before, but here is added the 'Blood on Face' tattoo layer, shown here in HARDCORE. There are three options in the pack that go well with the three main options for the bloody skin layers, with hardcore being the bloodiest for the face. Also shown here is the +REDRUM+ Blood Apron. This is MESH and comes in 5 sizes - XS S M L XL. Cute pockets both take the edge off the gore, and make it that much creepier!

There were many ways to do it, but it always had to be done. Until you made your bones in the world, you were nothing. There would be risk at all times, but this rite of passage meant something to anyone recognising the sign of it. 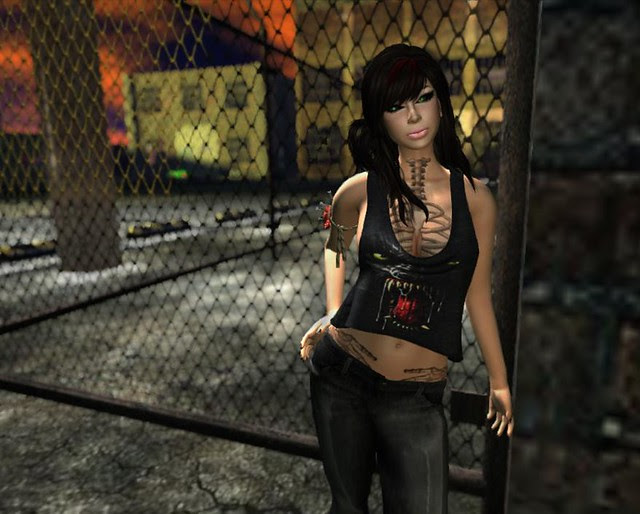 At first glance, a casual observer would not know of her status, of what she had done. That was the point of course. At this stage of her career, she needed to be able to blend in with the crowd, hiding her hard won markings under clothing to pass along the streets in the smarter areas of town. These forays into smart suburbia funded many a decadent habit, and with the access to businesses, and abodes that the relevant costumes gave, along came ample chance to case future crimescenes. This innocuous facade was easily discarded back on her own turf, when she would return to clothes chosen according to her taste and style. 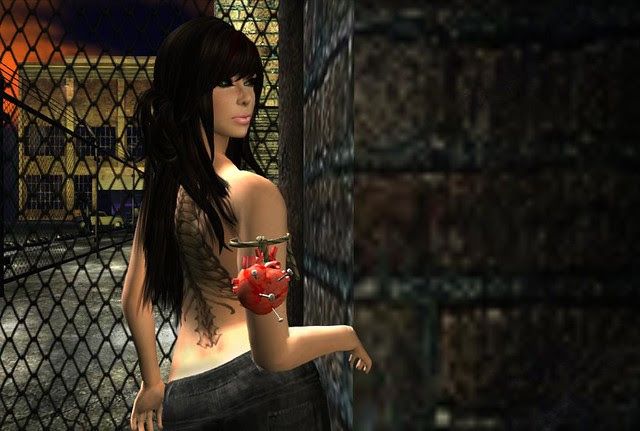 Of course, back in the district her bones had brought her, low cut clothes that showed off her signature ink were fantastic, but not something she always felt she had to wear. Her bones, hard earned, were hers to display. They demanded respect from others, anyone looking twice knew what she was capable of, what she could achieve. This brought trouble from challengers, and admiration from acolytes. As meaningful and beautiful as these macabre designs were, she didn't mind at all. 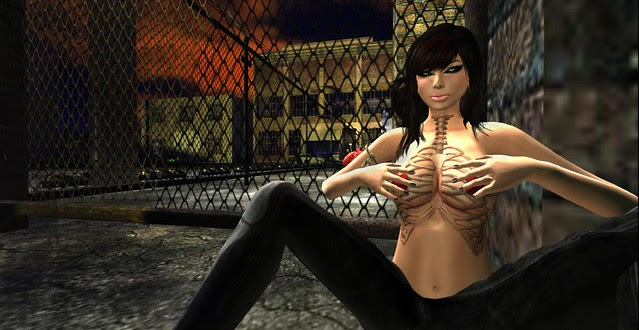 Here is the first in a series showcasing some of the designs currently available at +REDRUM+. There's a lot of MESH items, which are available in the range of standard sizes, so if you are willing to shape yourself to fit these, there are some fantastic designs. Here, the Wolf is one of a range of dark themed and grungy tops, paired with jeans, textured with x-rays of the bones they conceal. Of course, I love the Ribs tattoo, clear and concise detail, shown here on a full tattoo layer, two other versions included.
You can find the items at the +REDRUM+ Marketplace store here...
https://marketplace.secondlife.com/stores/112400
Or inworld, here...
http://slurl.com/secondlife/Little%20China/224/62/32