On the search for her brother Sybill had seen more fantastic things and beings than she ever planed to see. Now she somehow got into this tropical forest and was not sure if she would ever manage to find out of it. The night had started quite promising. She visited a party in a house where she supposed that her brother might be trapped in. But although she had managed to get down to the cellar and to check all rooms there was no sign of her brother. Instead she found a path which lead her into the forest. She could simply go back but now she knew the secret of the house and of its owner. He would not want her being able to tell anybody that he knew how to open portals to other dimensions. So she needed to find an other portal but she did not know if she would end in the dimension she came from. 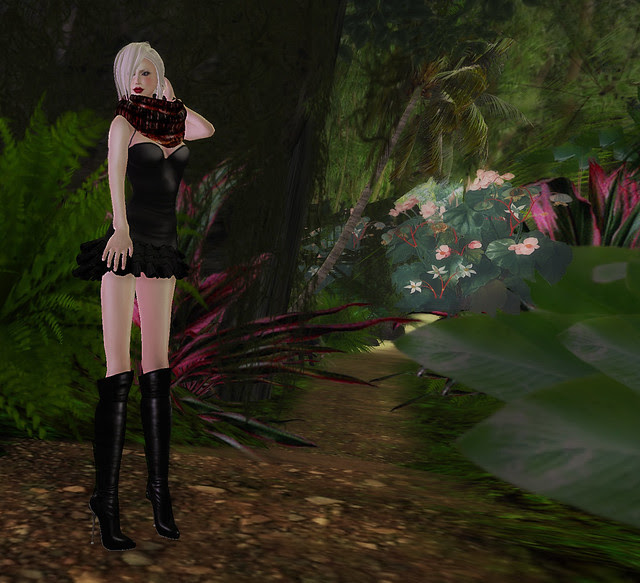 The Marilyn Outfit is new on the Bubblez Design lucky board. It is a short black dress which can either be worn with fur around the shoulders or without the fur - like on the picture. The primparts can be resized. To be able to win the dress it is needed to be a member of the Bubblez Design group. The scarf comes from Zeery, it is a great store for scarfs and other accessories. The scarf will be only available till October 31st as it belongs to a special halloween edition. The set includes a version which is attached at the chest and one which is attached at the spine. There is also a halloween gift in the store and even better a sale.

Picture taken at Cabrian Outpost with poses from Purple Poses.
Posted by Dagmar Haiku at 3:32 AM 0 comments

[suffering for your sins] 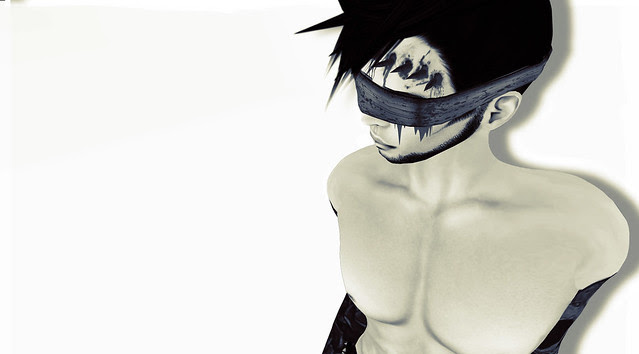 "Not even the unbearable ache as they drilled those thorns of steel through my head and took my eyes was comparable to the pain you punished me with when you left me, blind and suffering for your numerous sins."

A little mix of old and new in this post, with the awesome belt from .:Hermony:. being a long-time and beloved guest in my inventory, just as the versatilely usable black leather pants from *Deviance*. The ZombiePopcorn hunt gifts you with a creepy, bloody blindfold and the Dia de los Muertos-inspired sleeve tattoo from [Reckless], whereas the crown of thorns - or rather studs in this case - is a Marketplace promotion from ~.:.Hysteria.:.~, 40 L$ for a limited time only! 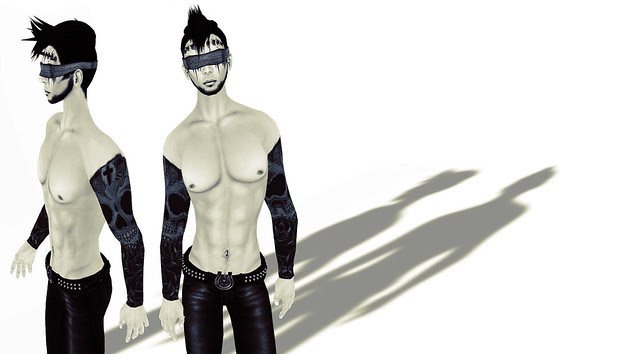 Was that the sound of a horn? Fina walked quickly to the windows to peek out. But it seemed like the ship still hadn't arrived. After releasing a deep sigh she turned around and started to clean the empty coffee shop. Her long hair, which she had wrapped together to a ponytail. moved from side to side while she worked. 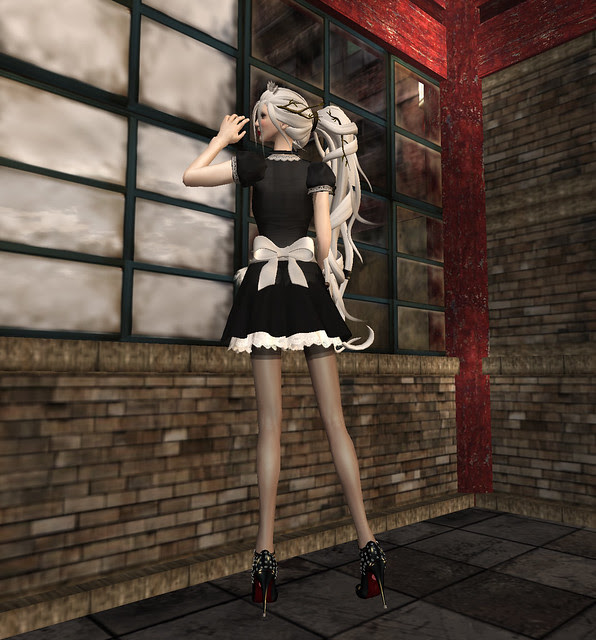 She was allready busy with making new plans and dusting always helped her to focus her thoughts. Should she make plum or applecake? Or both? Fina stopped for a moment and walked back to the window to peek out again. Hopefully the ship would arrive soon. Then the coffeeshop would be filled with guests. 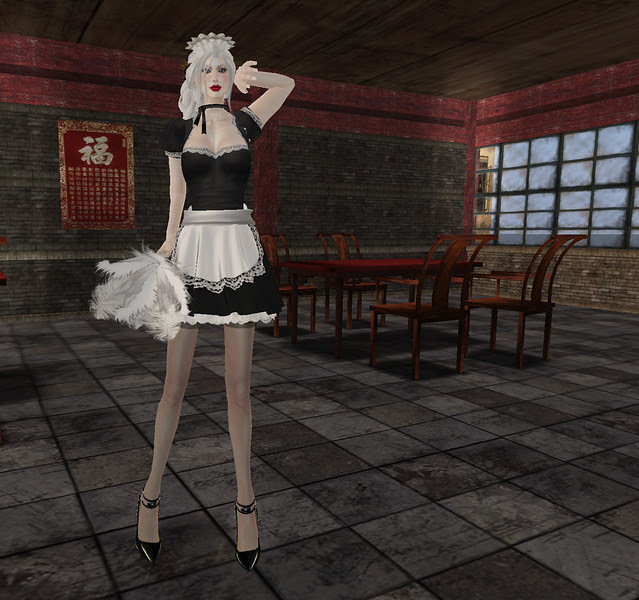 The french maid costume is the latest release from Icing. The outfit comes with a maiddress, fitting stocking and two kinds of headdress (one with frills and one without) and of course a featherduster. To avoid that the body moves through the skirt there is an alpha layer included but it is not needed to wear it. Icing is a great store for classical costumes and dresses for women. No matter what Miko Omegamu creates it is always elegant and unique even when its a classical dress its always visible that she made it. The texturing is very well made and the little details of the dress like the frills of the apron are just lovely. Icing is definitly a store which is worth a visit.

Picture taken at Kowloon with poses from Purple Poses.
Posted by Dagmar Haiku at 2:25 AM 0 comments

Hair: 0L - who doesn't love Princess leia particularly this iconic hairstyle which has been encapsulated perfectly by Milk Motion for - the Seasons hunt which comes in 3 colours > Milk motion
Skin: 0L - Great halloween inspired group gift > JeSyLiLo
Coat: 0L - Superb unisex hooded skull jacket which is an Inn hunt gift > Toxic kitty
Top: 0L - lovely big baggy sweater of which I'm only wearing the vest layer - Inn hunt gift > Sakide
Leggings: 0L - LOVE this item which has another pair in this Zombie popcorn hunt gift > Tuttifrutti
Belt: 0L - Which has a pair of shades hanging from it, not shown in this pic and is a gift > Frenzi
Sneakers: 0L - Which have a skull design all over them & a must have unisex item > Santo

The statue cried again. Esra was more than satisfied with her work. Some priests had asked her to help them with a statue which had been crying blood for several month and then suddenly stopped. They had tested the machine they had installed in the statue to cause the crying but what ever they did nothing helped. It was like the statue was not willing to participate any longer in a rip-off. So the priests called Esra who was specialized on making machines work again. She was one of the best vampire magicians and machines were her special intrest. Esra loved to figure out how machines worked and she liked drinking machine oil way better than drinking blood. But crying statues in churches were easy. Esra spend some hours on telling the statue some horrible and sad stories and it started to cry again. 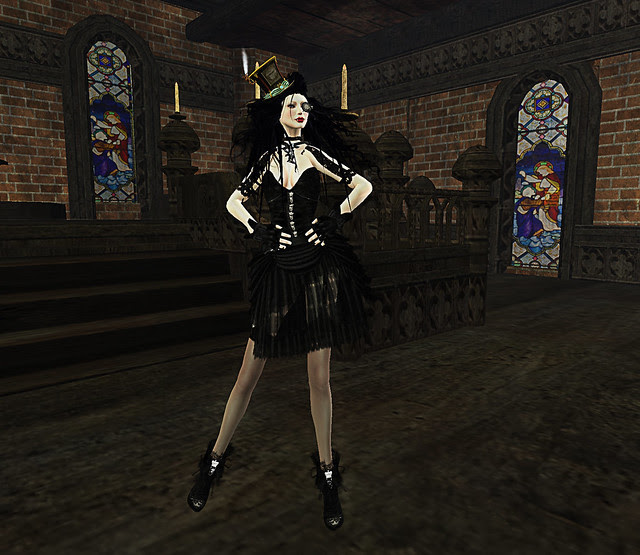 For taking some pictures for the 22769 Sanguine Noir Adventure I put together an avatar which hopefully looks like a crazy vampirish tinkerer. Ezura has great dark dresses so I choosed the black Lolita Crown dress as base. It comes with several skirts and includes the option to wear it as lingerie. Ezura also sells fitting shoes. The systempart of the gloves belongs also to the dress from Ezura but the glovetops with the bow belong to the black kidskin gloves from Indyra Originals. The hair comes from Exile. It was a bit tricky to adjust it as it is very wild and does not include resizescripts (it also did not work to put resizescripts into it). But with some help from friends it finally worked. The monocle comes from Super Possessed. The set includes a version for the left and the right eye. It has many details and is a great accessory. The hat was a huntgift in the first steampunk hunt.

The picture has been taken at Siden with a pose from Purple Poses.
Posted by Dagmar Haiku at 2:05 AM 0 comments

Picking up the threads

There are many fabulous items to be picked up, what with all the new releases and so many hunts which are currently on the go that's so hard for a lady like me who has had to postpone her second life momentarily to pick up the threads. So yes I'm picking up the threads of where I left off and of course the threads as in clothes - sigh - sorry hehe.
I decided that I needed to start somewhere and so I opted for The I need New Hunt (inn hunt) which runs from the 1st  - 30th October (check HERE for more details on participating stores you're looking for a bow) and the Seasons Hunt which is always a firm favourite (details  - HERE runts until the 29th October & you're looking for a pumpkin).
I'm absolutely loving Vero Modero's new boot collection and especially the Genova boots which I'm wearing below. They come in 5 great colours and I've got the feeling they're going to be hard to beat for my seasons favourite item.

Posted by Fauna Moonwall at 11:11 AM 0 comments