Another night in the graveyard

It was a beautiful night, the mists swirling through the long grass, catching in eddies like smoke around the rough edges of hewn stone, marked with the names of the dead. Few people came here these days, after the graveyard had been filled, and the church had fallen into disrepair. All who could remember the dead here were now quietly rotting away on their own, or drifting through the air as motes of ash. An occasional gang of some sort or other would scale the wrought iron fence from time to time, seeking a thrill, or a place to lay low. The odd ghoul, or other creature of the night would appear, but they never troubled Salome, in her playful moods, she was more likely to trouble them... There weren't so many neko around the area, Salome knew, but didn't care. She preferred it that way, finding the cookie craving, constant desire for someone to scritch an ear, subservient pet-like existence chosen by many of her kind utterly deplorable. Certainly she counted several humans among her friends, had shared her time and body with those who sparked her interest and lust, but a pet? Never! She dragged the tips of her claws along the well worn lines in the stone of the crypt she made her home, honing their edges, keeping them razor sharp. She was a hunter, through and through. What would she choose to hunt tonight? 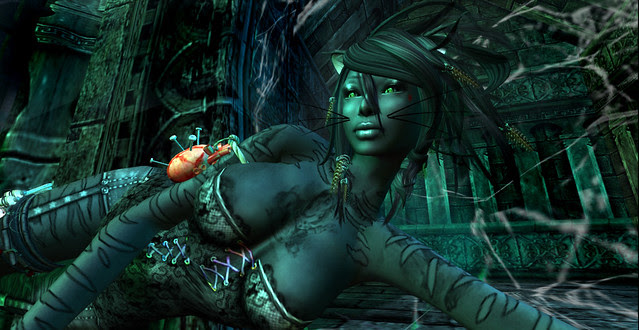 
Cattire - Neko HUD
*** includes the Neko HUD (and manual) only.
https://marketplace.secondlife.com/p/Cattire-Neko-HUD-V12/2309807
It's a slim scripted HUD for mood controlling and interaction and works with all ears and tails by Cattire. It's a basic tool and it is free. This animates ears and tails without an option to change appearance, the ears and tail for sale are dark grey, as shown here. However, if you wish you can purchase the Cattire - Neko Style HUD  It's also a basic tool, but not free. It comes with a large library of fur textures so you can create a look to suit you. L$ 200
https://marketplace.secondlife.com/p/Cattire-Neko-Style-HUD-V203/2309842
Posted by Vyl at 4:07 AM 0 comments