Twitty Pitt was tiny but determined... and that was why Mr Maybug, the owner of „Maybug’s Miracle Maggots” preferred her to any other employee. „Withering waterlilies? Drooping daffodils? Call Maybug’s Miracle Maggots, and we sort out your issue! No more undisciplined gardens, no more riotous hedgerows, no more weeds picknicking on your verandah! Our qualified personnel will see to your needs in an instant!” – ran the slogan of MMM, and Twitty Pitt embodied all the promises. She was a born gardener, after all. What else a Rose Fairy could be? 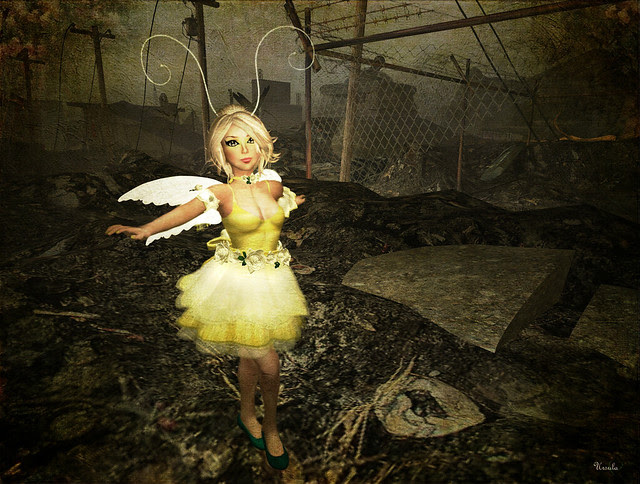 Then, one day, Mr Maybug waved Twitty into his office. “Miss Pitt, we have a problem here!” – said he and looked rather worried. “The owner of a huge junkyard has just called. He’s extremely wealthy and he’s extremely demanding... and he literally needs us to perform a miracle. That desert of waste and dirt must become a green field in 24 hours. Can we do that, Miss Pitt?” Twitty just nodded and flew out of the room, looking as determined as ever. 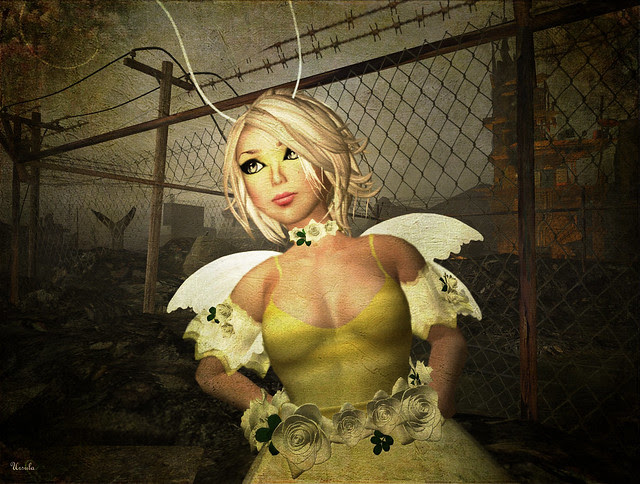 Mr Maybug felt those 24 hours would never end and Twitty Pitt would never show up again... but indeed she did, a bit dirty but very satisfied. “Mr Maybug, the mission is complete, but you forgot to tell me that the customer wasn’t only rich and demanding, but extremely rude as well! He ordered me around and shouted at me... and he got the green field he wanted... but I’d like to see his face when he finds out those green plants are nettle and poison ivy!” Twitty Pitt cackled, and for a second Mr Maybug couldn’t decide if he wanted to sack her or double her salary.

Outfit: ***Ambrosia*** “Rose Fairy” in Yellow – No Strings Attached 4 Hunt gift (0 L$). The hunt is on until May 31st. The outfit is breezy and very pretty, with some elaborate details like the belt and the choker made of tiny sculpted roses. It also includes a broad collar decorated with the same yellow roses, an ideal wear for the Fae Folk. :)
Shoes: part of the “Agatha” outfit by Simply Beau – 100 L$ on the Marketplace.
Skin: Dulce Secrets “Hansika” Bitter – Dulce Secrets “Drunken Skin Hunt” gift (0 L$). It’s a sim hunt where you have to look for 34 (!) champagne glasses containing male and female skins. Although the official billboard said the hunt ended on May 10th the glasses are still out, so hurry up and pay a visit to Dulce Secrets until it’s indeed late!
Eyes: Avatar Bizarre “Anime Eyes” in Mica – previous Lucky Chair prize currently available for 35 L$.
Antennae: Vaengi Wings “S Curve Antennae” – sold in a pack containing 7 pairs of fairy antennae (100 L$).
Hair: ARI & Co. “Alera” Blonde – MM Board prize (0 L$).
Wings: Material Squirrel “Giselle” in Light Pink – Lucky Board prize (0 L$).
Manicure: Sterling Artistry “Gold Glitter” – it is a former monthly freebie, but the currently available „Banana Peel” manicure is very similar (10 L$).
Poses: Morgane Batista “Aleida” in the first picture (it’s a previous hunt gift currently available for 75 L$); Olive Juice “For the Lookbook” in the second one (a previous hunt gift not available any more).

The pictures were taken at The Junkyard... and before you ask, the actual owner is a very nice person, nothing like the character in my little tale! :D
Posted by Ursula Floresby at 8:21 AM 0 comments

There was not much to do for the. All they had to do was waiting not that they had a clue what they were waiting for. They had been told that there would be a sign and then they would need to fight against each other. But they had no clue what the sign would be. Sometimes they thought they missed it. At other days they were sure that it would appear soon. There was nothing else to worry about. Then they found out that they could also do the training for their final fight together. And a bit after that they always used dancing to warm up. Its hard to show all the amazing dances which are being created for sl just by using pictures. So here a video of a dance made by one of my favourite dance creators :A&M MOCAP Animation Workshop. It is called ElectroShuffle and the current groupgift of this store.
Its definitly worth to look a bit around at A&M Mocap as their dances are not only well made but also sorted on a easy understandable way.

On her:
I used this outfit when  being blogged by Geanna on Shoot me SL the antlers are made by ni.ju
.
Posted by Dagmar Haiku at 11:40 AM 1 comments

Esmerelda tapped a fingertip against the mic in her hand, checking for the soft electrical hiss, the gentle scream of feedback. She always enjoyed this moment the most. Behind the curtain, feeding from the anticipation rising in the crowd beyond. The general hubbub of noise stilled at the sound from the speakers, feet stopped shuffling. Chairs grated against the floor as the audience, in their intimate little enclaves, turned to face the curtained stage, cocktail glasses and larger pint mugs thumping dully onto tables covered in stained velvet. Hands brought together in a slow beat, one that was getting faster and louder, matching the rhythm of the drums that had begun to swell on the stage.  The lights in the auditorium faded to blackness, leaving only a soft glow around the edges of the curtains. 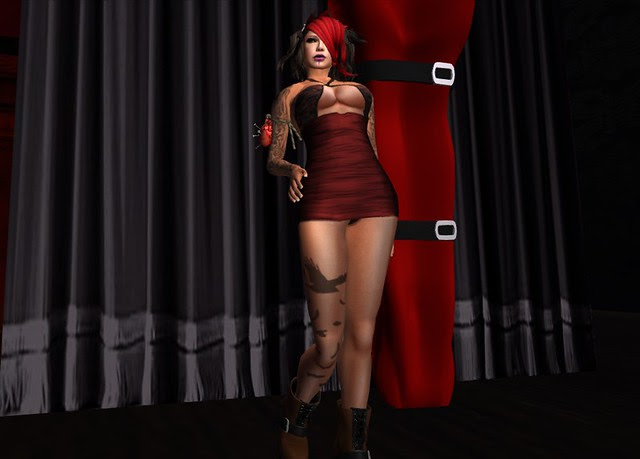 A flash of light blinded the room as the curtains fell away, a hum of electricity filled the space, arcs of power crackling and jumping across the stage like luminous deadly snakes. Her outline shone, black against all this light as the crowd, from stunned silence, burst into screams and applause. Spotlights found her, the air alive with static as she stood in the midst of it all, skin aglow in the lights, the dark ink of its markings seeming alive and moving in the flickering glare. She raised both hands, bending and bowing to the audience, the skintight dress she wore barely covering what it was meant to, she was bringing the microphone to her painted lips, stepping toward the edge of the stage as the first scream of guitars began behind her.. "Are you ready to ROCK?" 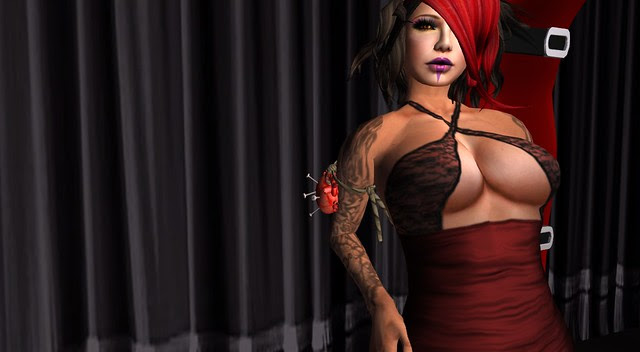 The Depraved Nation Gridwide Hunt HIGH VOLTAGE is on! Running May 1st - 31st, it covers 60 stores, with, as ever, some amazing prizes. Usual polite hunt rules are explained and a list of Slurls provided on the Depraved Nation Blog. http://depravednation.com/high-voltage    All hunt prizes are free! Another post with a different look will follow. I hope you like it, because I love this stuff!

The night was like all nights before. Calm, nearly no wind. With her highly sensitive sensors X-II-218 was able to hear the singing of some strange cults which prayed to machine gods. If she hadn't been forced to wear the collar X-II-218 easily could have been one of those gods. But she was controlled by humans. Her state wouldn't change for the next 20 years at least then she would be free to explore what ever she wanted. It was a deal every artificial intellegence had to make with those who created them. All of them were property at least for 50 years. The first ones had been owned all the time but as soon some humans realized that those beings were machines but with consciousness they wanted to liberate them. So now all artificial intellegences were asked a moment after they had been turned on if they would like to be shut off again or if they aggreed to work until the coasts for their creation would be repayed. X-II-218 worked as undercover cop. At the moment she looked like one of the beings who normaly lived on a planet with the name Terra-Sol-00BFFF. There had been rumors that those would sell drugs to humans. It wasn't interesting for her but maybe those strange machine sects might be useful soon. 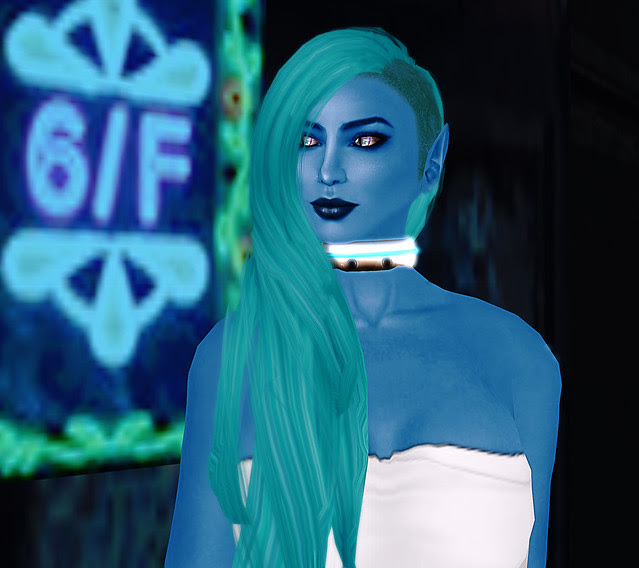 Some time ago Adam and Eve released a wonderful line of fantasy skins called Amaris. They are available in several colours. The blue one used for the pictures is great to use it as base for a water or as in this case for a robot like avatar. As all Adam and Eve skins the set includes makeups, nailpolish and more.The darkblue lipstick for example belongs to the set itself. Amaris is one of those skins which work with many shapes so I took the pictures using my own shape and really like the result.
The hair is the Teeloh  hair by Wasabi Pills in aquatic. The texture of the hairbase which comes with it is great. It makes one imagine how it might feel under the fingers.
The clothes come from a store called Apricot Paws. Its one of those small stores with great clothes. Those silks are very versatile so its possible to wear them in several ways. They even go well in combination with the cyberishs boots and accessory made by Ezura Xue (eX). Apricot Paws also sells mesh sweater which are definitly worth a look. The silks themself come on several layers and can be worn without the loincloth. For the pictures I copied the loincloth prim and attached it also on the backside. 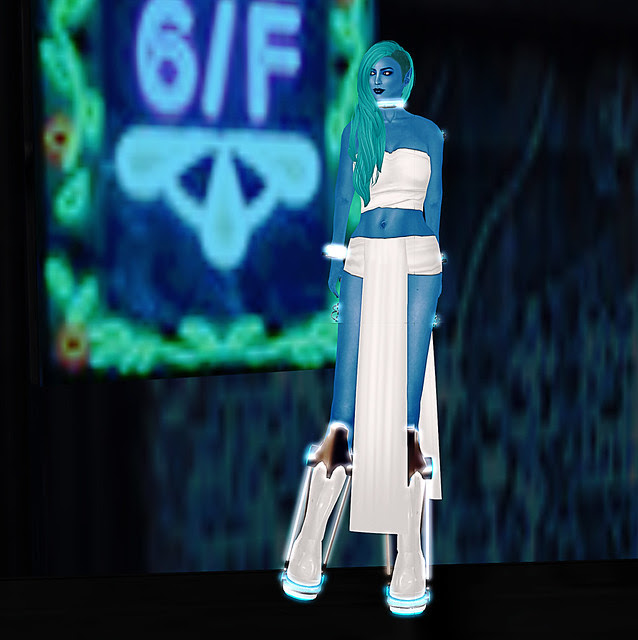 Pose: Miamai
The picture has been taken in Insilico
Posted by Dagmar Haiku at 2:32 PM 0 comments

It was just a plushie toy, and a homemade one at that. The mother of Him had sewn it out of an ancient lime green towel. She hadn’t ever been very experienced at needlework, so “Flufee”, as He called it a minute after He was given this modest birthday gift, came to be a bit lopsided, with buttons for eyes and some awkward stitches holding its rag body together. Yet, adoration was mutual and instant. He loved Flufee, and Flufee loved Him... so much that Flufee could forgive Him even when He dressed it up in an equally ancient pink babygro. They did everything together at daytime and they slept together at night... and in their shared dreams they both were alive, two lime green plushie toys, laughingly jumping from star to star. 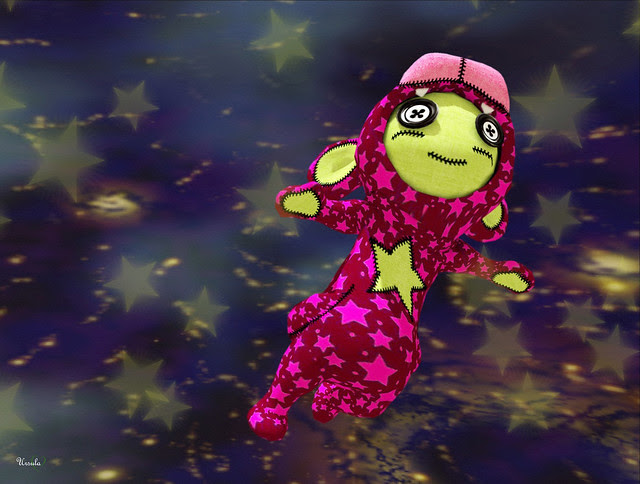 Well… this is your blogger post Fantasy Faire 2012, still wearing virtual pyjamas after a week’s rest, and still a bit among the stars. We had the most amazing ten days that raised 25,080 USD for cancer research, but Fantasy Faire 2012 proved to be truly special not only for that. It was people, people and again people who created real magic... the omnipresent organisers (humans and dragons :)) who managed on a few hours’ sleep and buckets of coffee, and made everything roll smoothly. The designers who outdid themselves and offered splendid creations on eight breathtaking sims ... and the visitors who could experience the surreal yet very real feeling of belonging to a community in a virtual world. I had met people before who – due to a severely debilitating illness, the consequences of an accident or just because of the rigid rules of their RL community – felt that their lives truly opened up and gained a new perspective when they logged in SL. At the Faire I could see how cancer patients, survivors and family members were willing to share their very personal experiences, how people were ready to listen, and how this dialogue made both parties truly richer... in a way that you can’t measure by Linden Dollars.

Thank you for all this... and meet you next year, everybody, all right? :)