Today at 1 PM SLT the Ezura Fashion show is going to take place. A lot of new outfits will be shown here. I love this red gown its very elegant and reminds me on a gown for a princess or a queen. In the fatpack is also a dollie version of the gown included. 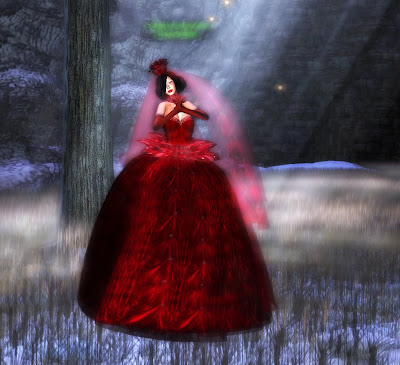 The short black dress will be the gift for the visitors of the fashion show. Its a cute dollie dress with an intresting pattern on skirt and top. The boots are also a new release from Ezura. 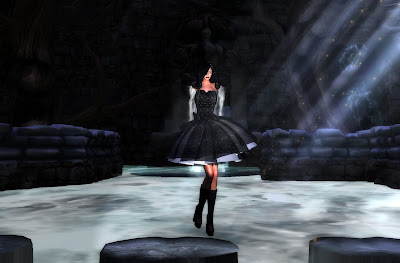 Standing in front of the library and looking angry after being kicked out for skating through the building. 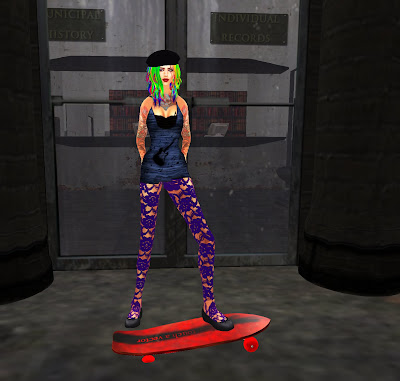 And then spending all morning in front of the library and causing lots of noise to let the librarians know that you can't kick out a skatergirl. 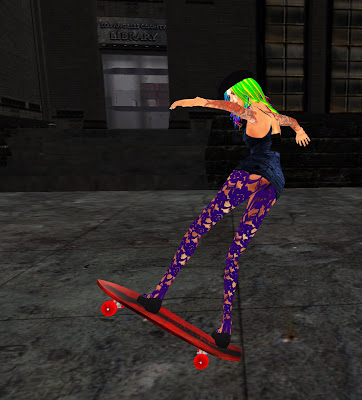 Elymode has a cute short blue dress with a guitar on the front as gift in store. It also comes with meshtights but i prefered combining the dress with the purple roselace tights from actchio. Those are at 1 linden at the moment as actchio moved. The tattoo is also from actchio. Colourful hair fits to a punky look so i used one of the carnival gift hairs from Secrets Hair.

OoEas! has some great stuff on their midnight mania (they always have great stuff on it). The gifts contain a shirt with fitting skirt and tights. The textures are very wellmade. You also could wear a sweater over the shirts (its also included) 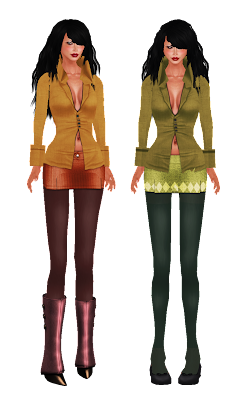 The gothic spring standing in the snow and searching for black flowers. She is very tired and insecure if its her time to wake. 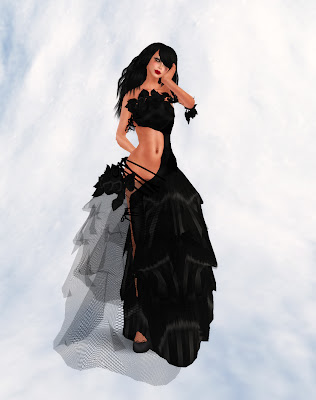 This very asymetric dress is a group gift from Aliza Karu Style. It comes with a top with black roses on it and a skirt which looks like being open at one side. The skirt is fixed with some black ropes and there are some more black roses. The fitting makeup to the dress comes from A:S:S they got much more styles than the used one in store and they all look great.

Flowers in the snow

A lady in a black golden dress with fitting cape standing in her garden and ruffling her hair as seeing all the snow. The summer was so long and so there was nearly no fall. And when they snow came she hadn t put any plants in her greenhouse. So she spends some time on thinking if it might be possible to save some of the plants. 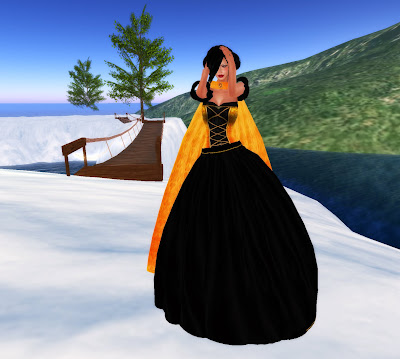 The black golden gown and the coat are the latest lucky chair item from Mystic Sky. The gown comes with two kinds of skirts (a normal one and a fuller one). The textures of the dress are great. The skirt looks like being made of velvet.

That's right, lovelies, it's week 2 of Luna Jubilee's blogger challenge '52 Weeks of Color' - like you hadn't guessed already, considering it gets so much feedback on the blogs. Blue is the colour of the week, and I had a hard time finding something blue, and not teal (which I'm actually wearing a lot) in my inventory. However, one of my all-time favourite outfits from BareRose saved me with its variety of colours, and I hope you enjoy the outcome as much as I enjoyed working with the picture. 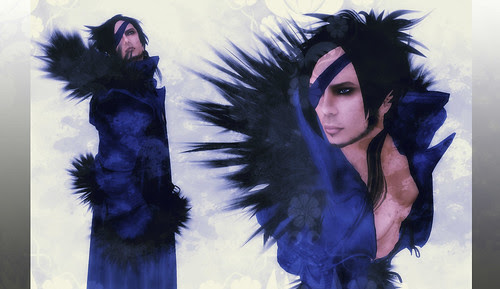 Standing in the snow in a warm kimono and pretending not to watch the artic hare. The kimono is one of the new tomoto lucky chair items. Its warm and fits well to christmas. And of course wearing it makes you look a bit like a gift. 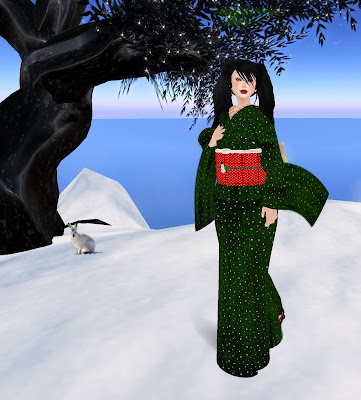 Spending time in summer flower fields but then falling over a stone and being caught in fall. The pose is the gift from No Strings Attached in the for the love of fall hunt. The short dress is one of the gifts from the Magic of Ozz Hunt. 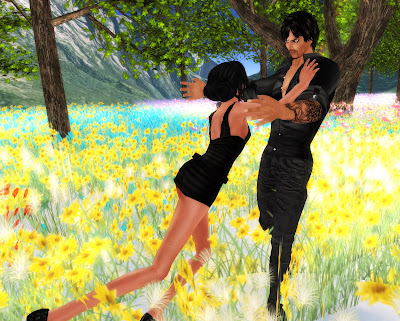 Just before going to bed a cute mainly free outfit. The brown sweater and the striped trousers are from the sassy kitty midnight mania boards. Both items are very cute and well made. The Mouse is from the oz hunt. Its a nice mouse and does not bite into ears. The flats are nonfree and from VIRTUAL/INSANITY. They are cute with skull. The skin is from the hsh lucky board. For being able to win you need to be a groupmember. 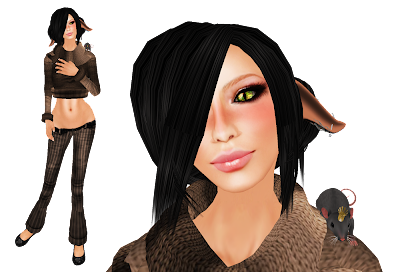 Emily Merrowind was a pirate by birth and a captain by adoption. She loved to sail, to fight and to drink. Normaly she spend her time on deck with watching the sea and playing with the anchor at her belt. The anchor was her lucky charm as it was the anchor of the fist ship she boarded alone. She did that in the age of 8. But well that might be only a cock and bull story. Emily knew nearly every secret of the sea but she didn t know why she was tattooed all over. 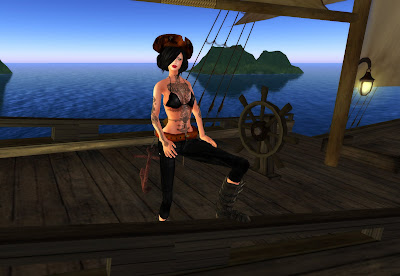 She only remembered the pain from beeing tattooed but her second father never spoke about her real parents so she also didn t ask. But then they sailed to that area where she had never been before and somehow she recognized that the knots in her tattoos as islands around her. Emily went to her cabin and spend some time on examing every inch of her skin. She realized that her skin had been turned into a treasure map. 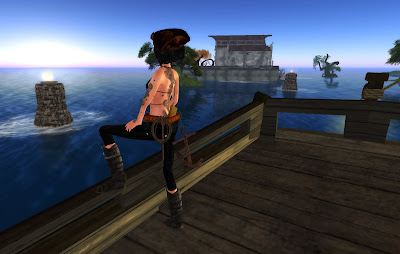 Later in the evening when her crew was sleeping she jumped through the bull's-eye into the water and swam to the island, she supposed the treasure had been hidden on it. She only took her knive, some clothes she had found on a ship she boarded and a lamp with herself (she put those things on a little raft). At the shore she exchanged her clothes and was embarrassed. She had forgotten to spend time on having a look as the clothes and so she had choosen a very pretty golden dress with butterfly wings for her adventure. Hoping that nobody would identify her with open hair she made her way into a tunnel. 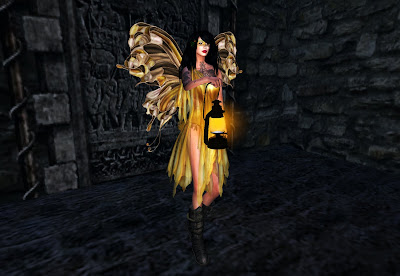 Luckily she had her magical eyebrows. The tunnel was very dark and the light of the latern didn't help much. But the eyebrows helped a lot. Wearing them she was able to see much in the darkness. 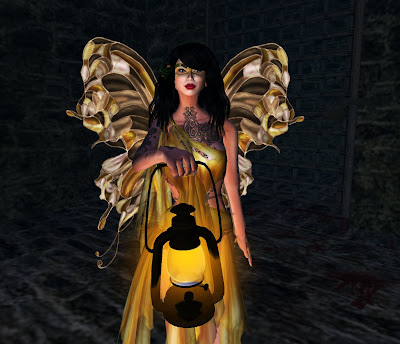 After a while she heared the sound of water. But not the sound of brine. It was the sound of fresh water. And in the water she found the treasure. Big blue jewels hidden perfectly under the water surface. Emily picked one of them and made her way back to her boat. At the next day she went back with her crew and they all became very very rich. Emily used her asset to buy a nice title. She became Duchess Stellamaris and spend her time on causing scandals, drinking and becoming the most famous rose-cultivator in the whole known world. 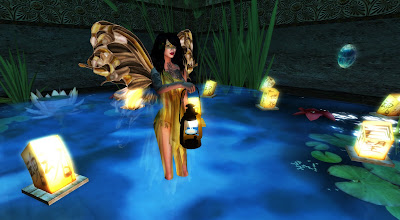 Its the magic of oz Anniversary and because of that a hunt is taking place. Three of the Oubliette girls are taking part in this hunt. Elizabeth from Frippery made the great eyebrows with the cute pumpkins, the golden dress with the wings is the gift from Evie's Closet and Milli, the creative mind behind No Strings Attached made the Latern which could be used with a pose or with the ao. The belt with the anchor is the latest item from [COGOO] it is resizeable so it fits smaller avatars as well as wild and strong pirate captains with a huge belly. The celtic tattoo is the gift from Fallen God Inc. in the Celtic Magic Hunt. The only negative thing you could say about it is that it doesn t look great if you wear all the included layers at once ;-). 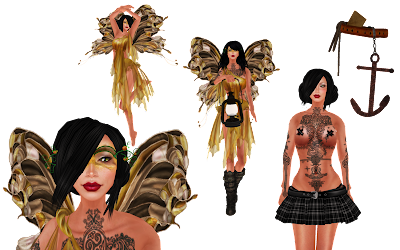 Take a litle walk to the edge of town
Go across the tracks
Where the viaduct looms,
like a bird of doom
As it shifts and cracks
Where secrets lie in the border fires,
in the humming wires... 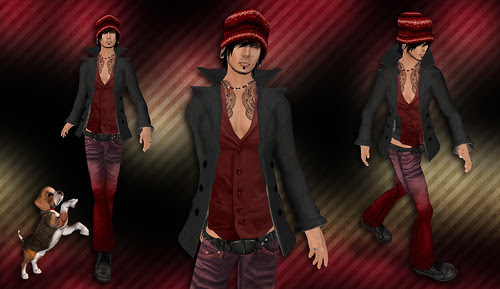 Hey man, you know
you're never coming back
Past the square, past the bridge,
past the mills, past the stacks
On a gathering storm comes
a tall handsome man
In a dusty black coat with
a red right hand.