Something was stirring outside... 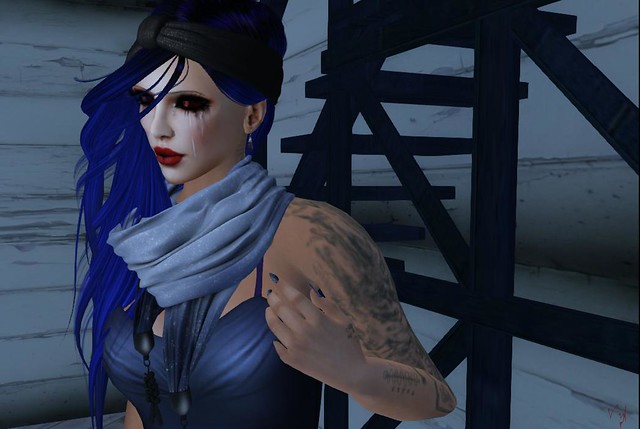 Something was stirring outside, under the earth. It wasn't the purposeful meanderings of the little folk in their velvet coats searching for worms or a mate, but still it had purpose. Out in the orchard the leaves still tracked the movement of sun, not yet turning the shades of autumn soon to come, while the fruitful harvest blushed and fell. Something deeper moved, turning more rapidly than sun or moon. What was it? What was it? She could feel it coming... 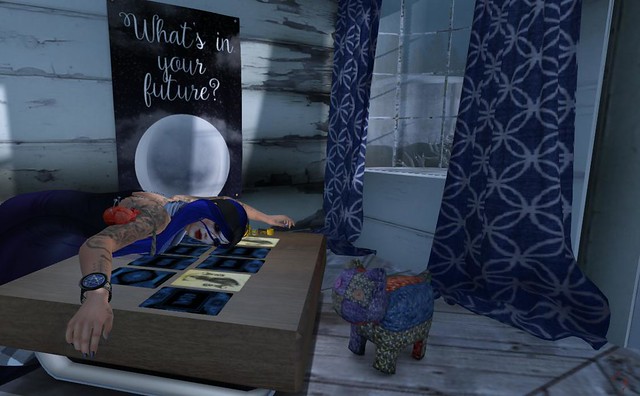 Catdog had been of remarkably little help, moreso even than usual, and that was indeed something on which one could remark. For hours she had tried to question the beast - it's button eyes regarding her with innocence in every stitch. Straightforward, or cryptic, her questions received no answers, though she was certain it knew something, though it spoke only in riddles and quotes from the silver screen. She turned to the cards, they could be evasive in their turn of course, whenever she looked too intensely, posed too direct a query. As she dealt, the cards themselves seemed to mock her, over and over she asked, rephrasing, reasking, desperate to know. Finally, a cough from catdog as the grinding noise of things spinning, moving through earth grew louder from the orchard, she flopped forward, cursing her own idiocy. 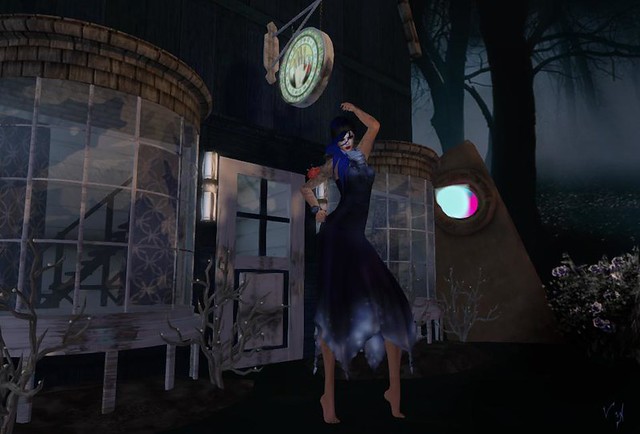 Her collapse into fury and bewilderment at her own lack of foresight lasted only a moment, she ran outside, not a moment to lose. The oldstone was glowing, casting flickering light over the ground, over the spinning cubes as they broke free of the earths grip, to fly off, left and right, up and down. A low cackling flew with them, laughter hysterical and inane. She cried out with delight to see them fly. What had distracted her? What fog had covered her eyes to blind her to the date, to the return of the twisted cubes? It mattered not. They were back, and now they were out there, ready for the taking by any hand or eye quick enough to glimpse their hiding place. Waiting for nothing, she began to run, into the the night, after the blue tinged nightmares.

Twisted Fall 2016!
This is the SIXTEENTH Twisted Hunt - I've been as distracted as the woman in my tale - there's a lot a lot going on RL right now - and there will be for the forseeable future - so this kinda snuck up on me this year - but it could not have come at a better time.

As ever - this is the hardest hunt in all of Second Life - and for no small measure is the best for that! There are no clues - save those on offer from those other twisted folk in the group chat who cobble together lists of hints as the hunt progresses - please remember to ask nicely- a please and a thankyou go a long way, and believe me it's easier for us to find a hint if you have the number of the store you are stuck on as well as the name! The chat is fun and friendly - one of the best parts of the hunt.

There are 91 stores, there can be 10 visible decoy cubes in addition to the prize cube - which will be in sight somewhere. If you choose to de-render - be warned - there are unlimited decoys allowed in walls, floors, ceilings etc!
There is a list of Landmarks - for those you just cant take searching for any longer - you can skip to the next to return to try again later.

Here's your starting point! At the Twisted Headquarters

Tattoo : Fallen Gods - Auspex~ Tattoo, Green Old Ink
Several colours included in this prize - Omega appliers included - I discovered only this week that there are magical items available that mean you can use omega appliers on other mesh body parts such as my SLink Mesh hands and feet!
Earrings : Hudson's Clothing Co. - Amethyst Divination Earring
Pretty Pretty - I feel like I have these RL somewhere!
Bracelet : :::Sn@tch  - Strega Bracelet :::
There's always room for pentagrams!
Nails : [:Rad Designz:] THF16
HUD driven, six beautiful designs for your mesh bodypart nails
Dress and Scarf : [.NS-Riel.] Gypsy Wanderer
Gorgeous - Handkerchief hemmed dress, fits and flares and the colourfade is just beautiful. The scarf is wonderful, ultra-realistic. I don't have this in RL and I desperately want it!

Shop :  ~Adorably Strange Wares ~ The Divine Oracle's Shop
Lovely little build - door opens on approach. You can climb the stairs to a sweet little attic room.
Standing Stone :  - Lilith's Den - Inverdur -  Celtic Ogham Elements Stone
Depending on the ancient script you click - you are treated to different light effects.
'Tarot' set : [Curvosity] - Cardomancy Prediction
Pose set perfect for when the cards have worn you out!
Catdog! : Chiana Oh - Mystic CatDog
This cute little cuddly guy... girl... catdog is scripted to spout sarcasm and movie lines at you! You can even mod the script so it says what you want.
Poster : ChiMia:: Divination Poster
Brighten up your walls with a glimpse of the future!
Posted by Vyl at 2:49 PM