If somebody would ask me for a list of my ten best friends in second life Paco and Manuel, from 22769, would always be on top. We know each other for a long time and lived even for half a year together on a sim. So if they would have asked me "Hey we are planing to make a yellow version of the causual knit dress what do you think about that?" i would have said "omg yellow? That won't work at better make a black version or a green one". Luckily they didn't ask and simply made a yellow version of that dress which is now sold in the Courtiersloft. It looks really great. The dress could be worn as kneelong dress, as short dress or with the jeans which come with it. The skins on the pictures are also sold in the courtiers loft at the moment. The belt on the right is in an outfit which is sold currently in the jaunty sale. That sale just for guys clothes. 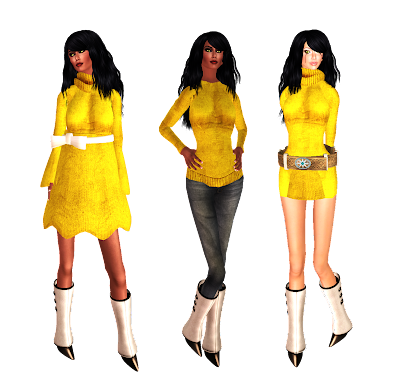 22769 also has a new groupgift. This month they made pants with a cargo pattern (i hope thats the right name of that pattern) and a fitting shirt.