Colours of the sky 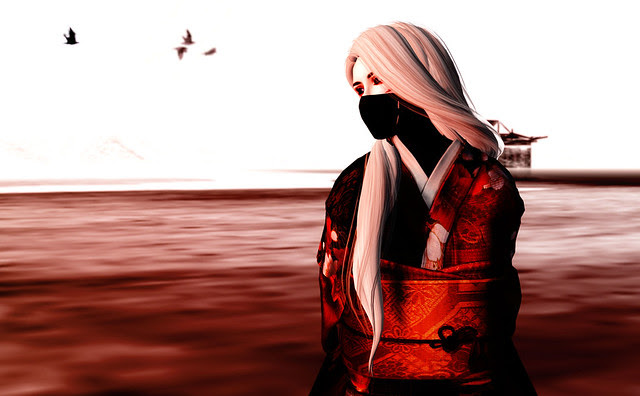 The colour of the sky changed in the middle of the fight and then she stood on different ground. It had happened before to her and she had been training for those moments since she could remember.
The next would be that they would try to trap her. But she knew that the area which surrounded her could not be real. The light was wrong. She drew her sword. It had been made by the best author and best smith of her clan. No matter if the ones she would need to fight would be real or written she was prepared. 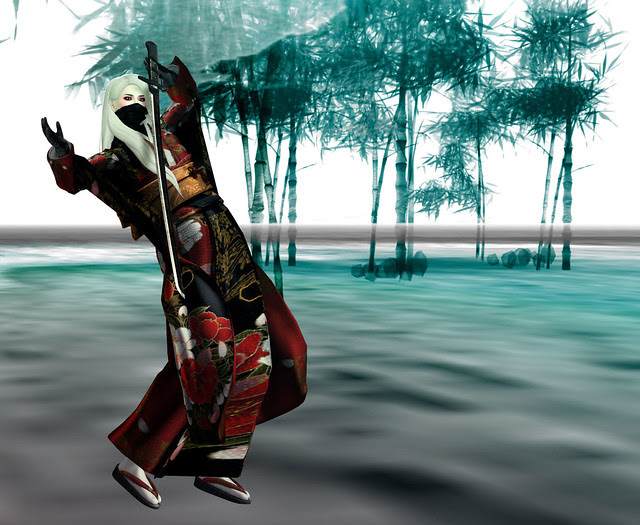 The Surgical Nurse Mask from Razor is made of mesh and comes in the starndard sizes. The set includes an alpha layer and a hud which allows to colour the front part of the mask in different ways. For the pictures a black dye has been used.
The Hair is called "Erika" and comes from Wasabi Pills, it first has been released at the Fantasy Faire but is of course still available at their Main store. There is also a male version available with the name "Erik". The haircut fits great to romantic or fantasy looks but also works in combination with suits.
The Kimono is made of rigged mesh and comes from Sweetaholic. There are a wide range of colours available. As the Kimono contains the tabi socks as well as the geta it only comes in one size. This is sometimes a bit of a pity as it is not possible to wear it barefoot but as it is very well textured and nicely made it is not a real reason not to buy it.
The Katana is available at Messer Co. which means it does not only look great it is also scripted for CCS. Besides of being able to be used with racials it has some style options. The blade can be curved or straight and it is also possible to choose from several colouring options.
The poses come all from Captivity Co. Sometimes it is worth to test how normal poses look in combination with a weapon. No matter if it is a sword or a gun.
The used skin is currently a group gift at Glam Affair. It has a very intense make-up.