Ipolema 3rd of Haligale was satisfied. This had been her tenth mission and it had been successful. For her that would mean her time as apprentice would be over and she would be seen as a fully initiated shepherdess. Not that it was a surprise, all the women of her family were shepherdesses but still it was a personal success for her. 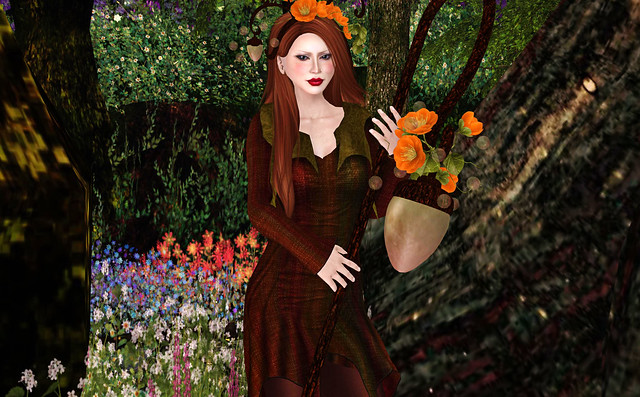 Now she would be allowed to command bigger herds. And soon she would be granted permission to use her staff not only to direct sheep but also other beings. Her training had started as soon as she had become able to hold a staff. The first beings which had been directed by here were frogs and other amphibians. As soon as she was able to control those she did proceed to bunnies and then finally to sheep.
Sometimes she wondered if being a shepherdess wasn't a waste of her magical talents but then she saw her aunt herd humans. 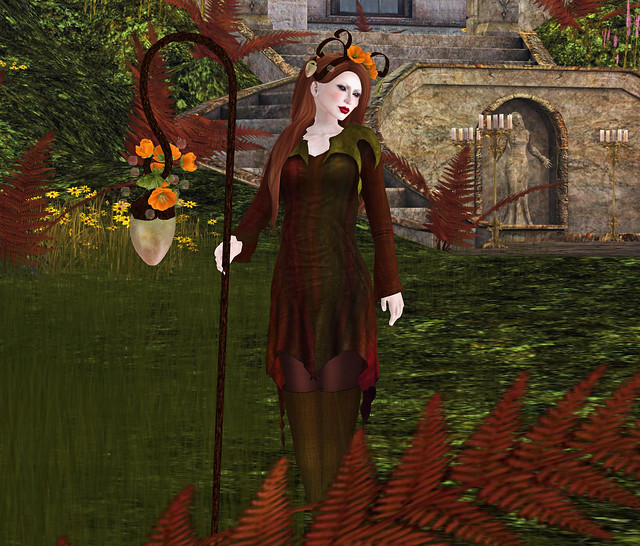 The Fantasy Faire 2014 will start tomorrow. And it will be a wonderful event as every year. The participating stores range from high fantasy to street roleplay and from clothes to buildings.
The Wayfarer dress from Poet's heart is one of their donation items for relay for life, as well as the staff and the headband. The dress comes in beautiful autumn colours and with fitting boots and pants. What makes it unique is not only the shading of the colours but also the elegant cut. This does not only allow to use the dress for fantasy roleplay but also for events in which a short dress is appropriate. The dress comes in the standard sizes.
The staff and head dress are made both of unrigged mesh and come with a hud which allows to choose the colour of the flowers, leaves and wood.
The poses used for the pictures come from HopScotch who also take part in the fantasy faire. They made staff poses. The set contains five poses with fitting staffs but it is of course also possible to use an other stff.

The Erika Hair from Wasabi Pills is one of my favourite hairstyles from that store. In Gingerbread it goes very well with the dress. The dragon eyes come from Sterling Artistry and are also available as mesh eyes. 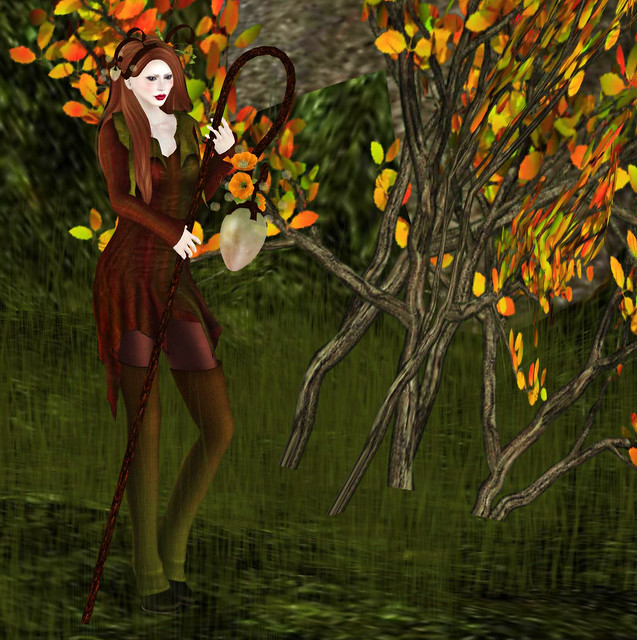 All the pictures have been taken at the Fantasy Faire.
Posted by Dagmar Haiku at 12:08 PM