A Clockwork Spiral - The Future Is Bright

Marie4972 was feeling rusty, albeit she knew there was no oxygen in outer space... no rust could therefore consume her delicate cogwheels and shiny surfaces. Yet, she was definitely feeling rusty. Maybe because she had been orbiting Earth, a robot ejected from a spaceship, in the past five hundred years, all alone...? But she had never ever given up hope. One day they would come for her, and take her back to the family she had been serving so faithfully. Yes, they would come. Marie4972 continued watching the magnificent, bright blue planet, and the lights were reflected in her equally bright, blue eyes. 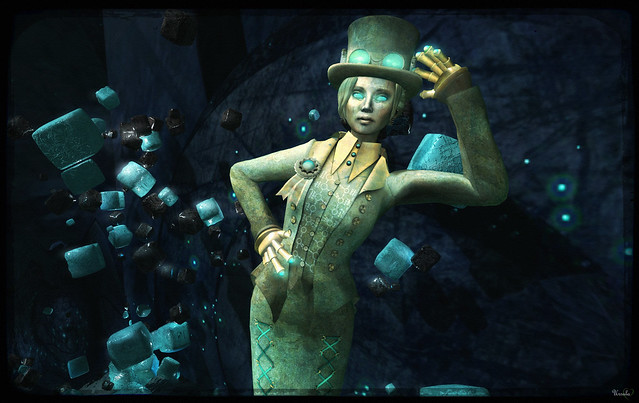 Who might have ever thought that Alia Baroque would go steampunk? Unbelievable it may seem, but it's still true: Fallen Gods Inc. offers four absolutely new and splendid avatars - Anna, Oscar, Marie, and Nicola - at the event called "A Clockwork Spiral". The complete avatars cost 1200 L$ each, but you can purchase the female and male skins (990 L$ each, the 3-piece fatpack costs 1500 L$) and the outfits (390 L$ each) separately. Please don't forget that the event is a fundraiser for the National Kidney Foundation, open until October 1st, and 50 % of the proceeds from the Anna and Oscar sales is donated to the Foundation... so, again, another noble cause to support with your precious Linden Dollars!

Avatar: "Marie Rouille" by Fallen Gods Inc. - 1200 L$, for sale at The Clockwork Spiral.
Pose: "Hat" by BehaviorBody Animations - a freebie available in the mainshop.
The picture was taken at LEA25 - "The Sea of CubicDreams", an installation by Alegría Studios.
Posted by Ursula Floresby at 12:12 AM