The train had rattled and rolled through the countryside all night. Sleep had been the last thing on her mind as she stole aboard in the orange stained twilight of the city's railway depot. The click-clacking of wheels on rails had formed a pleasant beat in her mind, lulling her into sleep, resting back on her guitar case. As morning had dawned, pale fingers of light stealing through the crack in the door, she had awoken. Pushing the truck door open wide as the train slowly rounded a bend into some small town, she blinked, rubbing her eyes. It didn't help. Something was very wrong. Except for herself, the world and everything in it as far as she could see, was grey. 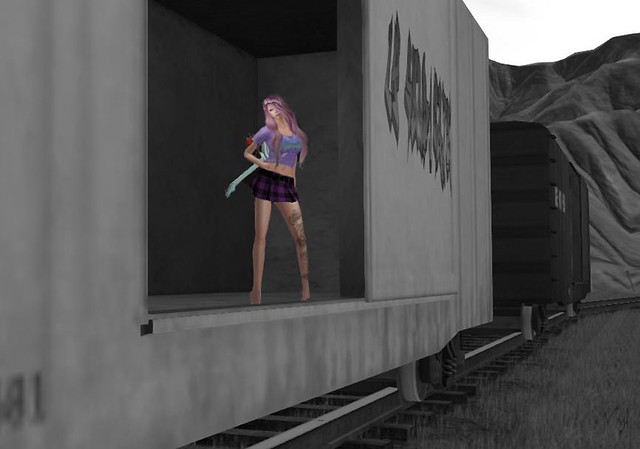 So far as she could tell, the town was deserted. No workers busied themselves at the station as the train did not halt, merely slowed, the driver apparently as troubled by the place as she, though lacking her curiousity. Sparks flew as wheels spun in place on the tracks, such was the haste with which the train was asked to depart. Jumping down, Lya watched the train pull away into the grey haze of distance. Turning to the town, still she saw no one, streets were empty, but the stores were open, groceries on the shelves still fresh, though as grey as their surroundings. After some time exploring she sank to the ground outside one store, leaning back against a towering grey telegraph pole to rest. Unclipping the latches on her guitar case, she lifted the unusual instrument from its niche and began to play. The soft notes strummed from the strings reverberated in the still street, tendrils of sound wove from the instrument, their vibrations shaking colour from the air. 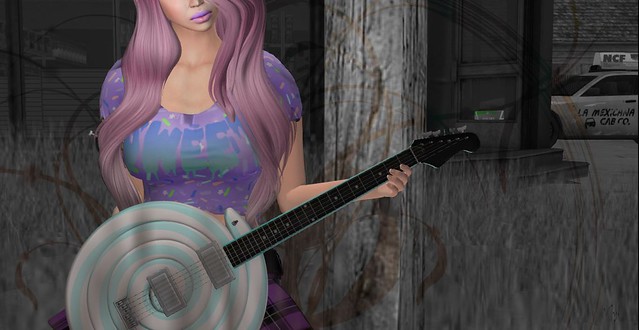 As the song came to an end, sounds from buildings nearby met her ears, the creak of a swing in the playground across the street... She opened her eyes. The grey shadows, so perfectly blended with their surroundings that she had missed them entirely, regained their form, colour and voices. Clambering over a nearby taxi she scrambled up onto the roof of the market to take in a view of the town, restored to life and colour through music. 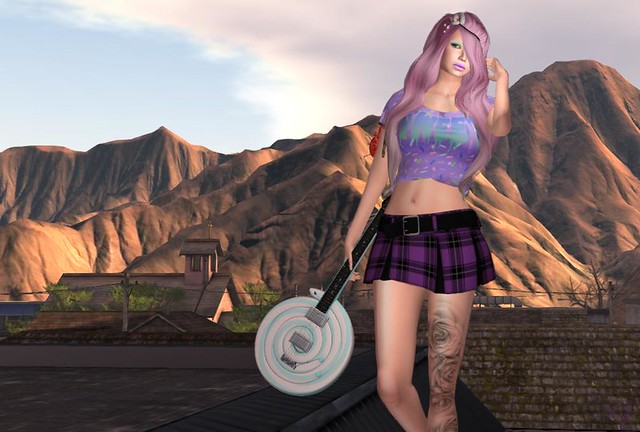 Prepare yourself for a sugar overload! The Candy Fair 2014 has arrived - running from October 3rd to October 17th over two sims. Each sim is packed full with amazing stores, offering delightful items in a candy theme, from the lightest sweetest sherbet to the darkest smokiest bonfire toffee. Featured here are some of the items from YumYums, there will be more, I'm heading off shopping again soon! There is a script limit enforced in the sims to try and keep lag to a minimum - bear in mind before you go! 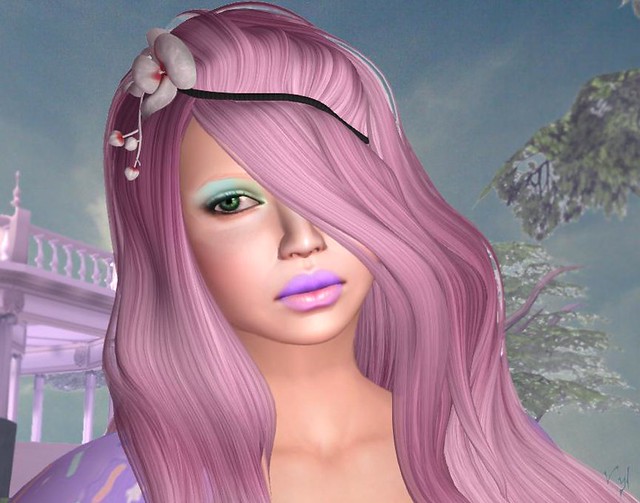 Other items shown:
Hair : (r)M Hair No.21'14, oneSize - o7.4-Fantasy L$ 285
One of the Fantasy colourpacks. Lovely!
Skirt : HOC Industries - Pleated Mini Skirt (MESH) L$ 175
Many HUD driven options for this skirt, including extra fabrics if you are a group member!
Guitar Poses : <K&S> Poses with a guitar. L$
6 different poses - with guitars for each - can be used without!
Posted by Vyl at 3:25 PM