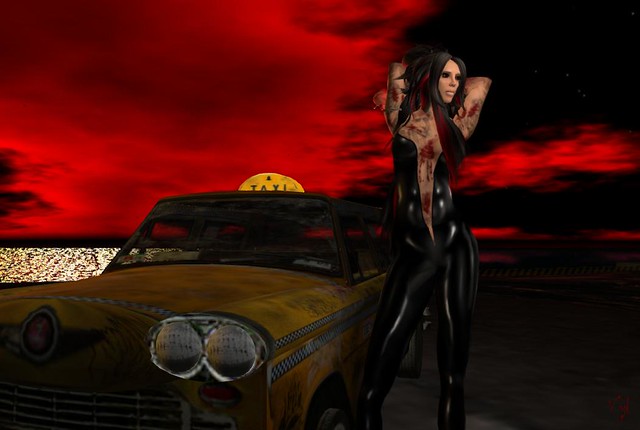 Vyl wanders past, suddenly struck by the beauty of the smashed up old Taxi "ooooh pretty thing..." glancing around she moves closer, running her fingers over the metal, then swinging up onto the bonnet, sitting there for all the world like it was her property, and grinning "Mine"
She looked over as S approached, eyeing her suspiciously... "My taxi.."
S eyes Vyl and raises a brow at her rather protective, and untrusting tone "errr.. Morning Sis"
Vyl smiles oddly, torn between the sensations of ownership and protection for her sister and for the yellowcab... "Greetings love... you arent after my Taxi are ya?"
S starts to circle the Taxi, ignoring her sisters question for the moment as she suddenly felt like that is exactly what she was after, but strangely hadnt known it until now. She let her fingers glide gently over the filthy yellow metal, almost carressing it as she made her way around to the front where Vyl sat, she tilted her head and said "Your Taxi?? morelike My Taxi, and I'll thank you to remove your carcass from it"
Vyl growls "Quit touching! Its Mine." before smiling benevolently "You can have the dead guy under the blanket I hit earlier..."
S's eyes widen a bit at the growl, she shook her head, trying to clear it, unsuccessful, she found herself fondling one of the headlights , she pulled her upper lip back, exposing her usually hidden fangs and shook her head "I don't think it is your Taxi, you should take your decomposing corpse and move along"
Vyl scooted her arse closer to the front of the car, her leg knocking S's hand away from the headlight... "S'mine... now quit fondling it. It doesnt like it. It likes me. Coz its mine."
B whistles "TAXI!"
Vyl shouts back "MY taxi", pointing at S "NOT hers" and then to B "Not YOURS neither!"
B walks up to the Taxi and looks at it .. " Hmm I dont see your name on it"
Vyl narrowed her eyes "Its got my name on it.. its got my arse on it. S'mine..." 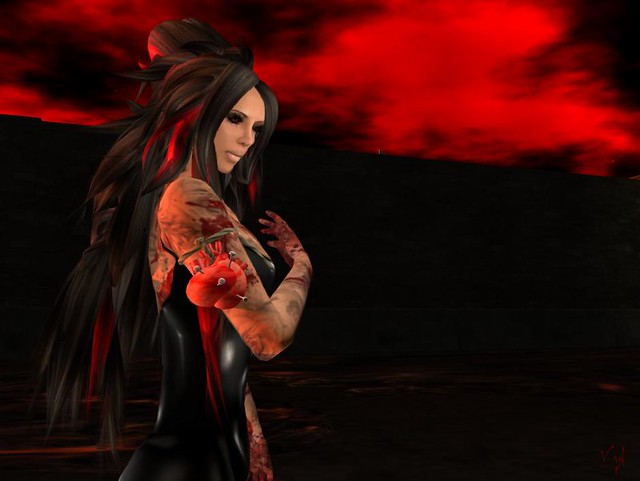 S hears someone approach and turns fluidly on her heels, hissing at the female , she looks back as her hand is kicked off and lunges to grab Vyl's lower leg intent on pulling her ass off of HER taxi, she growls at B "Back the fuck off it's miinnneeee!" she would start pulling at Vyl if she had indeed caught her around the calf...
Vyl flails as her leg is caught but turns face down on the bonnet, fingers curled round the metal near the windscreen wipers "Mine!! Get off me!"
B pulls out a Can of Spray paint grinning while she puts her initials on the side of the taxi "No, You're wrong see there is my initials .. So its mine " She tosses the can away, smirking some more at S and Vyl
Vyl shrieks "Befouler!!! ya ruining mah pretty yellow drivin masheen!"
B looks confused at Vyl and shakes her head " No, I clean My Taxi everyday " Chuckling a bit she then glares over at S, smirks then back at Vyl "Now both of you get away from my Taxi!"
S grabs the leg with her other hand, extending her claws, digging into Vyl's flesh. There was a small voice inside of her screaming "S?? What the HELL are you doing? That junk car's been there forever! Leave Vyl alone" but she pulled on Vyl all the same, and started to crawl over her, using the leg as leverage. She makes it on to the hood, half covering Vyl, reaching for the fingertips clutching at the edge of metal, trying to use her own body to wedge Vyl off the hood.
Vyl snaps off one of the windscreen wipers and swishes it around like a rapier... threatening both S and B with severe eyepokage or rubber burns from the wiper.. "Back the fuck off both of ya! its MINE!!!"
B backs up dodging the wiper. "Girl are you nuts! That taxi is MINE!!!!" She steps to the side and hops on the roof and sits "Now try and move me Bitches!" grinning at them, she knew she would die soon.
Vyl snarls, whipping the wiper around indiscriminately, hitting everyone a lot, including herself. "Get yer disease ridden arses off my car!" 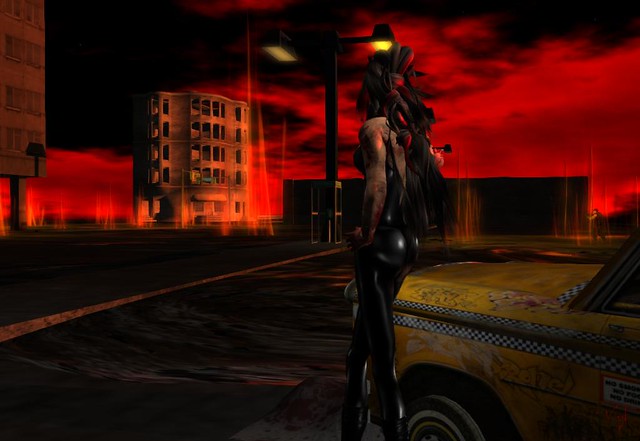 S ducks the wiper to avoid losing an eye only to miscalculate her movement and have the wiper connect with her cheek she hissed "Bitch" in her sisters direction but was now livid that B had violated HER Taxi with spray paint! She scrambled to the hood and stood there, wiping the blood from her cheek, like the Queen of the Mountain she roared "IT"S MY TAXI" she drew her sword, and sneered at Vyl gesturing to her wiper blade "Mine's bigger skank now get off, both of you before I turn you into shish kebabs"
Vyl roars with laughter "Yeah yours is bigger, skank! Now get off mah car, and back to the sidewalk corners where ya belong!" Flicking out the clawed blades from the weapon strapped to her arm she slams them into the metal of the bonnet, anchoring herself securely to the car, pulling a gun from its holster with her free hand, her other weapon now deeply embedded in the taxi's innards.. "I pay the frikkin road tax on this bitch.. its MINE"

I've RPd in CoLA since my first week in SL, from the parcel it was to the SIM chain it became. The City of Lost Angels is about to undergo an overhaul. Undergo an overhaul? Yeah. A whole new SIM build. To celebrate the city, and the looks that Vyl has worn, and the RP enjoyed, I'll be posting sequential looks, and RP snippets throughout this week.

The look above wasn't exactly what I was wearing during the RP (oh yes I have an image... in which Vyl is rocking some green hair, and a TAIL) but it is certainly a look I wore back in June 2009 when this RP took place. (Still wear the shape from back in 2007 today) Some kind of magical leakage had occurred as I recall, leading to runes being dotted around the city. Stray too close to the runes, and you were magically affected - in this instance - by developing a violent sense of ownership over the Taxi - still standing in CoLA for now. A location and place to sit Vyl is drawn to, all these years later. Just incase you were wondering - in the RP - S won out - a badass DPS, she took the taxi, leaving the Tank and the Healer hugging the tyres in pools of their own blood...