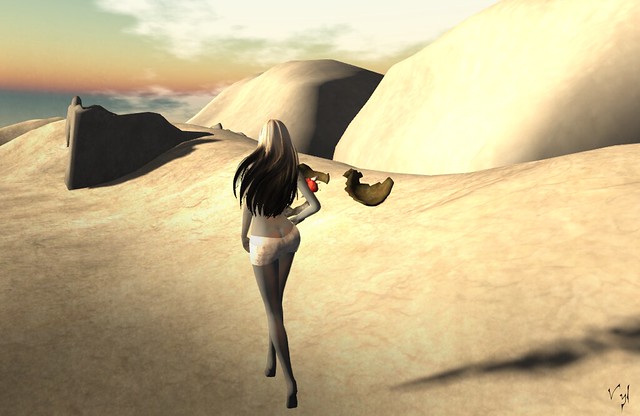 Life in the Sanorian desert was one of extremes. The dunes extended for thousands of miles, it was said. Few who took it upon themselves to venture far into their barren expanse came back to tell the tale. There had been a great civilisation here once, so the ruins told. But over how many centuries had it reigned? How quickly had it fallen? 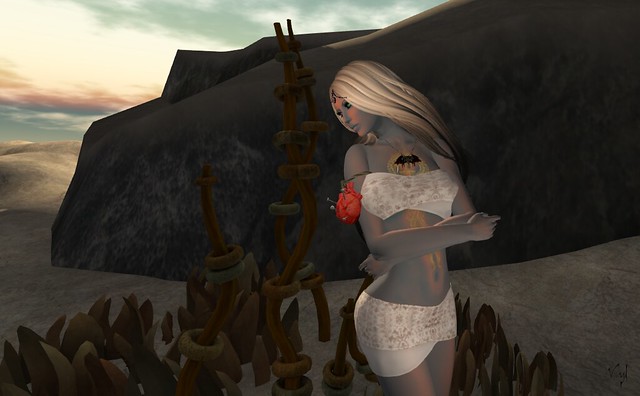 These things had been lost in the sandstorms of time. Many of the people had been lost too, or had left by ship if they had the means to do so. Those who remained had not cared to maintain the day to day ways of the great civilisation from which they were descended, not in any great depth anyway. There were far more important things to take up their time, scratching the surface of the ever encroaching sands to farm what crops they could, building shelters for themselves and their animals. Adaptation was a harsh lesson, easy in its way, but harsh nontheless. Those who could not adapt, who tried to force the world to fit their previous experience of it were doomed to failure. Those feted to succeed were those who could look around themselves, see the nooks and crannies, areas in which shadows pooled, cool and refreshing even at the height of the sun. As it was there that life began, and there life was maintained with no need for intervention. Those who discovered this grew strong, and carried her with them, so there she revelled. 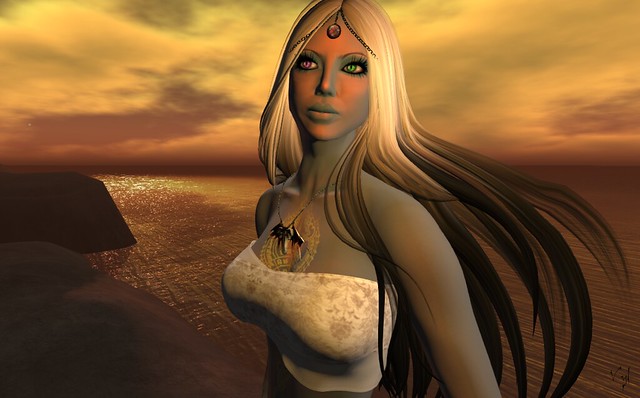 Once the sun began to fall, and shadows lengthened, she had more scope. Soon the heat held in shifting sands would dissipate, sinking lower and lower. Walking across the dunes she liked to feel the grains of sand between her toes, a tactile comfort which dancing across the heat haze of day could never hope to provide. The shimmering sunset glinted on the sea, igniting the fire in her eyes. While ancient ceremony had been lost and temples had fallen, the people who remained clung on to their beliefs, and so she endured. Civilisations would build up again, she had no doubt. People would come, develop, grow. From the sands, greatness would emerge. You could trust her on this. In the desert, you could always trust the Djinn. 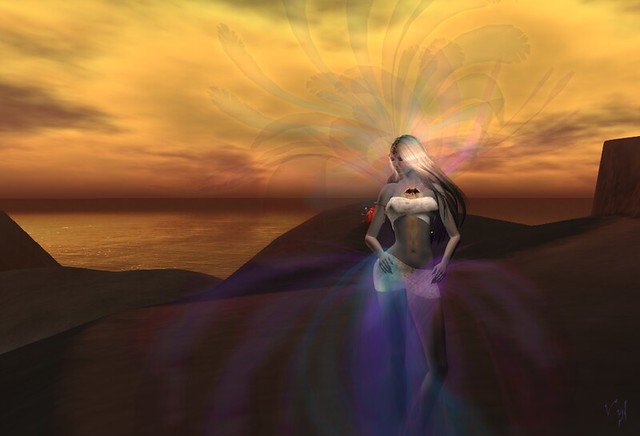 All items shown are 100% donation to Relay for Life. These pictures were taken in the Fantasy Faire sim Sanoria

Hair: Wasabi // Mayra Windblown Mesh Hair  L$ 250
Two versions included Mayra, and Mayra Windblown as shown here (Included are also options A for small heads and B for large heads of both). 20 HUD driven regular colours and 15 colours with emphasis on the roots.
Aetherea

Eyes: !TLB - Aed Eye  L$ 200
HUDs included for Catwa, Lelutka, and Omega. Also if you don't have a mesh head, but like me, don't mind mesh eyes, theres another HUD by which you can control the colour of each eye independently, there are 12 colours possible for each eye. Great!
Severina

Headchain: !TLB - Kur Headchain  L$ 150
HUD offers three different colours of metal, silver, black and gold. There are 16 different tonal options for the scales in the headchain, so you get a wonderful iridescence rather than one colour.
Severina

Skin: [NM] - Immortal - Cleavage - Brows - Severina
This skin is a prize in the House of Garland Quest at the Fantasy Faire - You can get the Quest Pack from the TP point of all Fantasty Faire sims. This gift includes male and female skins, female includes six system skins - with and without brows for three cleavage options, natural, cleavage and corset. Also included are a huge number of appliers for mesh bodies and heads.

Tattoo: Fallen Gods ~ Balance Sak Yant, Gold
This is another of the fabulous prizes you receive at the end of the House of Garland Quest. It comes with three system tattoo layers, so you can choose to wear it all, just on the front, or just on the back. Omega appliers are included for each for your meshness.

Necklace : [HarshLands] FF X Necklace - ULTRA RARE - Demon  L$ 49
This is a GACHA item, one of three Ultra Rares available. This one is delightfully creepy!
Willows of Nienna

Swirls : Tai'Dyed - Mandelbrot Edge 05 Nebula Dance Costume L$ 325
These amazing adornments can form a swirling dancing avatar, as a full body alpha is included. The costume can take up all your attachment points - I know, I maxxed out! The pieces each slowly change colour, shifting through teal, blues and purples.
Sanoria
Posted by Vyl at 3:12 PM