He had already crossed many mountains but he would need to walk much more miles. Sometimes he was annoyed about the strange tradition he followed. But on the other hand he had seen many intresting places because of it. It was said that his family were direct descendants of Atlas. The titan who was holding up the sky. So they developed the tradition to carry spheres through the mountains when becoming 23 years old. With the years the spheres changed and finally they started to uses ones which looked like globes. 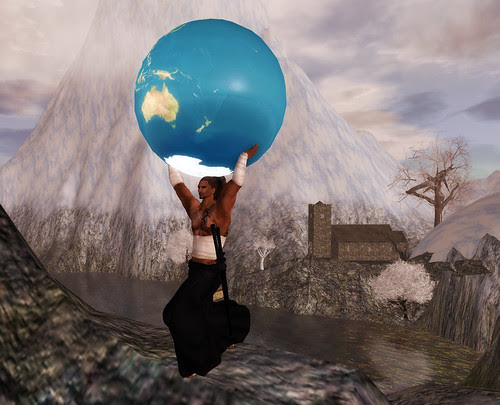 Studio Sidhe makes awesome pose props. This sphere is one of them. It is textured like a globe and has three inbuilt poses. Its not worn and has to be rezzed. Because of this it could be very well used in a photostudio. The outfit on the picture comes from Trap. It contains long wide trousers which look partly wrapped. The set contains also badges for the chest for both genders and also badges for the arms and feet.