Not only merrows live in the water. There are much more water related creatures. In the deepth of the sea live huge green golden waterdragons sleeping most of the time and dreaming of ships full with gold. At the shore little fae build their nest in empty snail shells and there are the water-sprites. They like to hear news from all over the world and they like to bake green cookies made of algae. But they do not get all the news they want to hear underwater. So sometimes they swim up till they find somebody to talk with. Usually they hide their feet in boots somebody lost. They have duckfeet and they are very embarrassed because of that. So if you ever go fishing and you catch a boot quickly throw it back into the water as it belongs a water-sprite.
So on the picture you could see a water-sprite talking to a crane to get news. He speaks about foreign lands and that the dragon who reigns the lands in the north is searching for a wife. She thinks of her feet and blushes (water-sprites turn green when blushing) and tells the crane that the dragon would be never intrested in her. The crane laughs in his mind and does his best not to chatter with his pecker as so the water-sprite would know that he found her answer funny. Instead he asks her if she knows a nice dragoness which might be intrested in that Dragonlord and instead of answering she jumps back into the water to wake the sleeping waterdragoness. 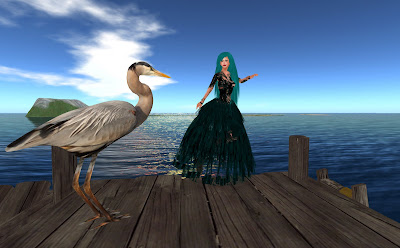 The crane is from the midnight mania board at neon frog studios. Its great well sculpted and being made of only 4 prims. So its perfect for the garden. And its smaller than the moose or the t-rex. The green dress is from the Simply Beau midnight mania board. It reminded me somehow on algae so i wrote that story about the duckfooted beings in the water. Its a really lovely dress. The texture of the top is great. The skirt looks a bit torn and like being made of lace.