She was a samurai. Not only by birht also by attitude. Normaly nothing confused her. But this morning she was confused. She had found a black rose next to her bed when she woke. Maybe it was a warning. But known for her black red armour and her beauty she supposed that it was a compliment. And she was right about that.

It was not the gift which confused her. It was more the fact that somebody seemed to have managed to sneak into her bedroom while she was sleeping. Avoiding all the traps which guarded her house and that the secret admirer had managed not to wake her was even a bit annoying. She spend a while on the balcony of her treehouse looking around for any trace.

Then she decided that she was anyways not old enough to care about men but the ability of the man who had brought her the rose impressed her much. She spend some time on building more traps around her house and spend night for night awake until he came again. This time he wasn t able to trick her. She fought him down and was really disappointed. The weeks of preparing to catch him had increased her abilities so much that his were not intresting for her any more. Unfortunatly things like that happend rather often to her so that she never married but instead of that she became one of the best samurais. And this was much more intresting than being married and having children.

This armour is one of the hunt gifts in the Setsubun Hunt, which will take place from Feb 23-25. The hunt is a part of the bean throwing festival at the Aosagi Nanbu and Aosagi Nanto sims. In this hunt you have to search for coins. I did it last year too and it was great. This year there will be even more hunt gifts than the armour and of course there is also a version for men of the armour which will also be a hunt gift. The armour itself comes normaly with shoes but i prefered wearing it with my old DragansVarg ones as those are simply very comfy after having them for nearly two years. All the primparts of the armour come with a resize script. Which makes it easy to adjust it. The black rose also belongs to the set. For more informations take a look at the Ookuma Han blog. 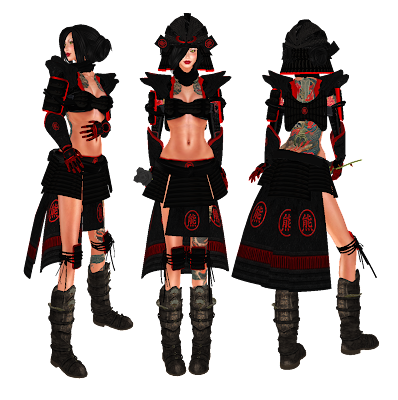 The armour finally answers the question what samurai wear under their armour - cute undies.