It was a long tradition of the women of Nimoje family to read the cards for others. So nobody was surprised when Cilia showed a talent for that. It did not take her long to master even more difficult patterns and her forecasts became even more exact. Unfortunately they became too exact. She was able to tell people that they would loose their keys on a certain day to a certain time, and if they would be able to get them back or not. She also could tell them what they would drink or what kind of food they would get. It scared people. So her family tried to talk her into being less exact and she even tried but the more she tried to say simple sentences the more horrible things escaped her lips. And everything she said became true. For some time she tried to stop reading the cards but this also did not work. She started to see the future of random people in the leaves of trees or in dirt. And then she changed. She left her family and started to travel. Now and then she approached people and informed them about their future and disappeared again leaving a trail of cards behind her. 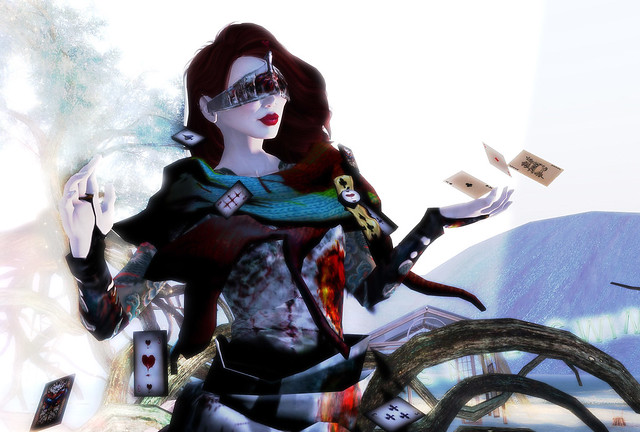 The Mia Mesh Hair from Wasabi Pills has been released some time ago. It amazes by it's livid design which makes it look like being blown to the side by strong wind while still looking elegant. So it goes very well with the Soldier of cards outfit from DownDownDown. The outfit is made of unrigged mesh and clothing layer parts. This makes it slightly old school but it is very unique and definitely worth to have a look at. DownDownDown offer a lot of cute and unique accessories as well. Captivity Co. take part in the Comic Fair. Their items are joker and card related. The pose used for the picture belongs to a set which contains the pose, cards and also a base ball bat - which has not been used for the picture. They also offer other comic related poses at that fair. Their booth is worth to look at, while the rest of the fair is mainly not related to the topic. 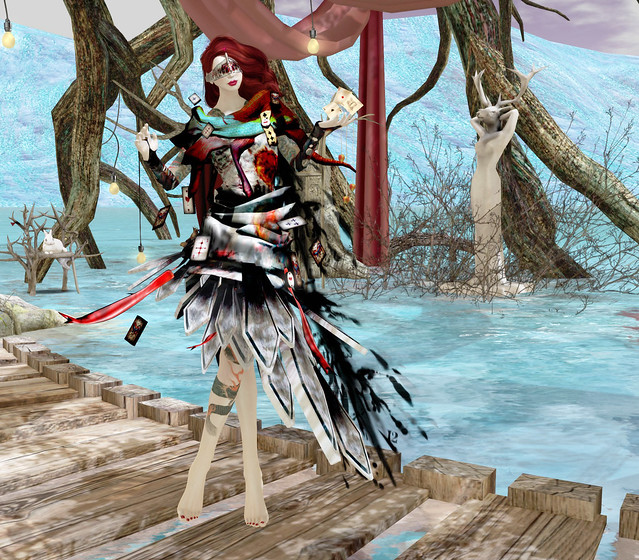