She was proud. At least that was what people said about her. Proud, stubborn, arrogant. For a long time she believed those opinions. She tried to change herself because she thought she would not be a good person. So she spend time with people who bored her talking about things which didn't intrest her at all. But it only made her unhappy. She knew that she was smart and she hated it. But trying to pretend to be somebody else did not work at all. She fell in love without really recognizing it and he did not notice her at all until she made a witty and smart comment. This made him curious he tried to talk more often with her. It was a hard fight until she believed him that he had not a problem at all with the fact that she was smart. After a while he proposed to her and she accepted after he repeated his proposal three times. Today was the day they would marry. And she was happy, the dress was beautiful and stunning. It would be a wonderful wedding and she was completly herself. 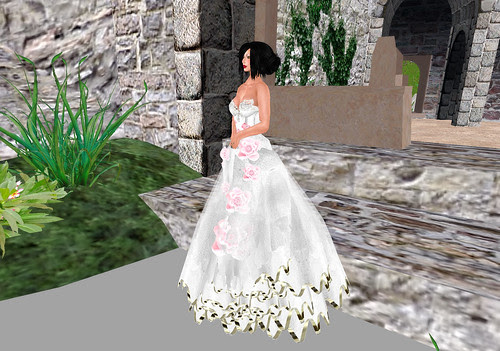 The dress with the wonderful roses is a limited gown from fierce. There will be only 150 sold of that dress. It comes with three kinds of skirts. A big ballroom skirt, a medium one which is also the one at the picture and a tight long one. The lace of the top is romantic and rosethemed as the rest of the gown. The dress works very well as wedding dress or as special gift as it is limited.

Email ThisBlogThis!Share to TwitterShare to FacebookShare to Pinterest
Labels: fierce