The sun was setting and the first torches were already lit. The High Priestess adjusted the last fold of her heavy ceremonial dress. She felt the weight of the ancient crown on her forehead and the weight of duty on her shoulders. The latter was much, much heavier, she thought. She also took the golden sceptre... although it was a mere symbol and not a real source of power, but the ceremonial rules required her to carry it anyway. She sighed and closed her eyes for a moment... then she was ready to enter the Labyrinth. The Minotaur was waiting in the dark. 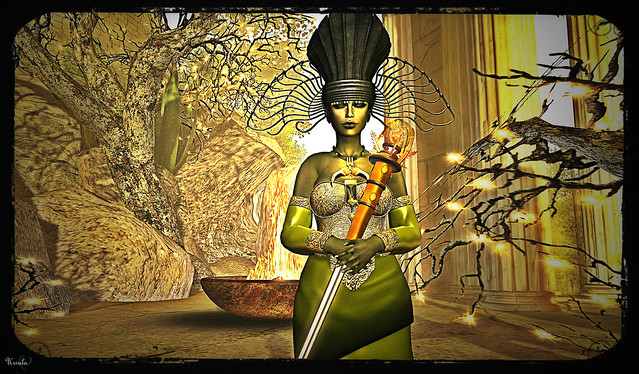 Those two pointy-eared guys at 22769 did it again! I was already squeaking with glee when I could see their creations at the last Fantasy Faire (I'm still in love with those elven ears...), and now I'm amazed how their mastery in fantasy art has developed in a year. They were already excellent at making modern clothing and furniture; now, in an eyeblink, they conjure up shoulder pet dragons and spectacular crowns from nothing. Paco and Manuel, I soo told you that you must continue with your fantasy line... it's an absolute success, you urban elves. :)
Dress: "Chloris" in Green by 22769, also available in Red and Purple. The RFL donation item is the special purple-and-white version of the Chloris dress, available at Hope's Horizon (250 L$).
Crown: "High Council Crown" in Iron by 22769. This magnificent headgear is also available at the Faire in Gold and Bronze (135 L$).
Necklace: "Apala" by Finesmith, an old Runway Perfect Hunt gift, not available any more.
Skin: The Plastik - Astrali "Io" by The Plastik, another great skin from the Astrali series that has 100 (!) different tones in 3 categories. During the Fantasy Faire you can visit The Plastik at The Faery Court; the full range of the Astrali skins is however available in the main shop (999 L$ for a single colour pack with lots of tattoo layers and appliers).
Eyes: Dragon Eyes "Sage Wisdom" by Sterling Artistry (85 L$).
Staff: Snoodle's Inferno Fire Staff Version 3 - a RFL donation item (149 L$). I confess I didn't know anything about Yap Snoodle until he sent me a polite message - which is very nice, coming from a practising goblin :) -, asking me whether I was interested in blogging about his goodies. When I received the Inferno Fire Staff I was quite happy I had said yes. It is a pretty mixture of moving and fixed parts, and it can be much more than an accessory, as the staff also allows to be scripted for combat. Yap's tent, full of interesting gizmos, is at Mourningvale Thicket - definitely worth a visit!
Pose: "Symmetry" by HelaMiyo, and old and absolute favourite (25 L$ for a single pose, 100 L$ for a pack of five poses).
Posted by Ursula Floresby at 5:00 AM