She was now alone at the island for three years and it was still irritating sometimes. But it seemed like there was no other possibility or way to deal with the things she caused. She wished so much just to be a normal being. Although she had not really an idea how to define normal. Everyday she wore the necklace with the strange symbol. It had been a gift from her parents but not to make her look pretty. It actually contained a charm which kept others away from her. 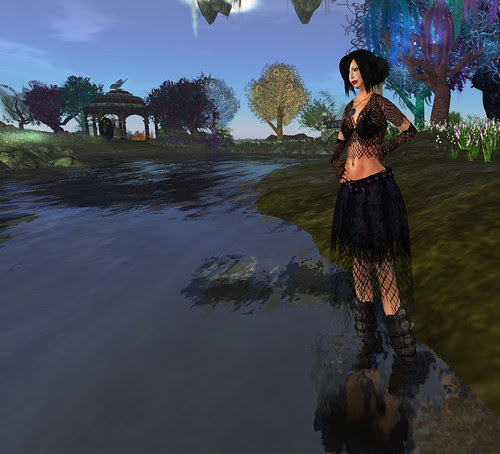 She had been born by a human mother but she had been more created than she would be the result of love. Her parents wanted to have a moonchild and they got one. But wishes like that should not be fullfilled. Still exhausted from the rites which had been needed to be performed to get a moonchild her mother became insane during the birth. Getting in contact with somebody who was moonbound and not earthbound was to much for her although she was only 24. So her father tried to raise her but soon he recognized that things around her started to change. Plants started to get leaves in strange colours and when he recognized that his skin started to glow lightly he sent her away on the island. She cried and plead not wanting to be alone. It was his fault that she was like she was and so she demanded from him to stay with her. But although he loved his daughter he loved power more than her he was allready experimenting with an other woman to create a being which might give him the powers his first born daughter could not give. So she had to go. The island was pretty but with the time the plants started to change. They started to glow and the leaves of the trees made strange alluring sounds. She spend her time with wandering around or reading books which came with the boxes of food her father let drop by helicopters every week. But one week ago she had found out that one of the mushrooms had started to talk. 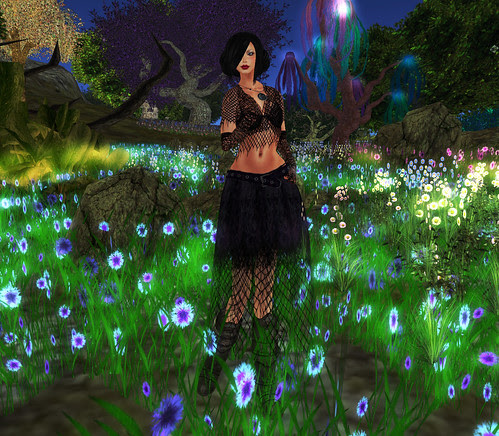 This outfit from The looking glass is called moonchild. This reminded me on the book by crowley with the same title. I wonder how such a being might feel among all the "normal" humans. There is also a great song by fields of the nephilim which has the title moonchild.
The outfit could be worn on several ways. It comes with a jacket which could be used as jacket or as vest. The trousers could be worn with flares (made of prims) or not. And there is a skirt included in the set as well. The textures which have been used and created for this outfit are amazing. Small elegant patterns in shades of purple. All the parts are non copy but trans so this is an outfit which could be used as gift very easily. I had to resize the skirt and the belt a bit as well as the sleeves of the jacket. The primparts come without a resizescript but those are easily to resize so it is not really needed.
The pictures for this post (well not the ones with the white/grey background) have all been taken at The Looking Glass, where this outfit is also sold. The shop with the clothes is on the top of the hill. But you could also get the most of the plants which you could see on the pictures as well on that sim. They are sold in a a building in the north west of the sim. Its a great place to explore and wonderful for pictures. 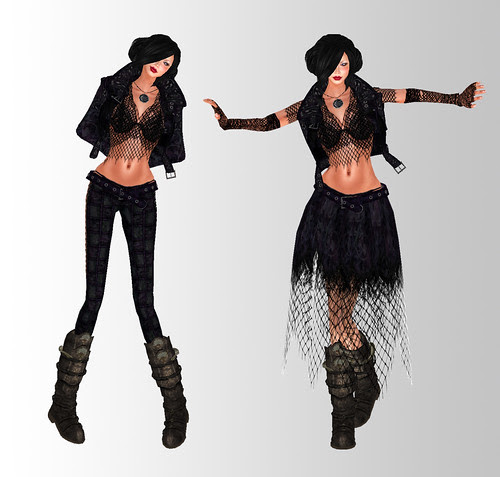 Email ThisBlogThis!Share to TwitterShare to FacebookShare to Pinterest
Labels: the looking glass