A young fighter grinning after having had a fight with her former best friend. The reason was of course a man. Now that the former best friend had lost the fight she is finally rid of him. As much men might sometimes fight for a woman, women sometimes fight to get rid of a man and she had managed to do so. A good reason to be glad. She was not sorry for her former friend at all. That one had been quite mean and now she would have to be with the guy.

This outfit is new from Ezura. I like all the belt like thingies all over it. The collar looks cool as well as the gloves and the legband. The set includes all system layers. The prim parts are scripted so that is comfy to adjust them. As Ezura, the builder, is not the smallest i had to make them much smaller but there was not problem with doing that at all (sometimes the minimum size of things is still large). I like the look of this item a lot. It looks a bit aggressive but quite cute at the same time. 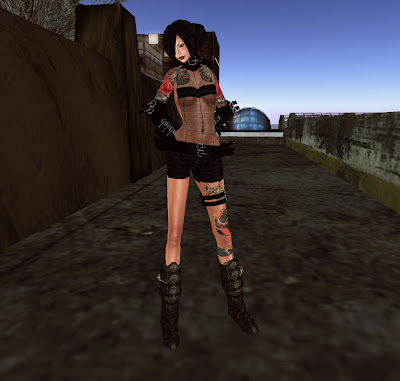