Waiting for the dragon to get home

Standing in the water waiting for the beast to appear. The dragon. The wild one untamed and being in need to learn some manners. So it is time to make some stretching moves, while waiting that the scaled husband gets home from burning villages and the other things dragons like to do, to teach him a lesson about burning trees near the cave just for fun and because the light looks so funny... 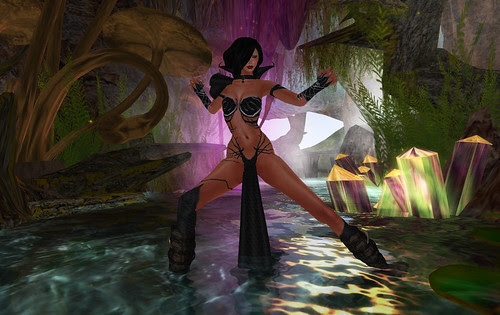 I was shocked when seeing that Ezura has an outfit named Dragon Slaver. In my opinion it is just mean to slay dragons or even to hurt them. I m a dragon in roleplay for a long time and being slayed is something i do not want to happen at all. But the outfit is hot. I was not sure if i would like it because the cut is very silk like. But i have to admit i like it a lot. It is an very sensual outfit made of thin bands of cloth. The bra comes in a version which covers everything and one which is so open that the nipples are free. The set includes a weapon which is worn on the back (and only looks good) and a helmet. The cloth looks like being made of scaled skin which is kind of mean but looks good. Maybe this is the reason why uncle Firewing disappeared? In my opinion the outfit would be great for roleplay although it might be good to have a high level and to be a good fighter as it is very tempting. 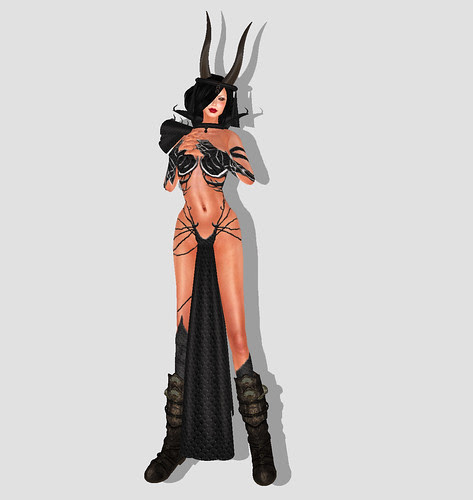 I took this picture and also the picture of my last post about a dress from Icing on Eternal Return. A great and stunning sim. And you could buy a lot of the plants they used to build it there as well. It is worth to take a look and great for pictures.
Posted by Dagmar Haiku at 3:53 PM