The Green Queen surveyed her realm with quiet, content happiness. The land was flourishing under her benevolent rule, and the people prospered. She walked around in the castle garden, caressed a tree leaf now and then. Everything felt so... alive, vibrating, growing, multiplying. The Green Queen kneeled down and touched a flower. She was serene, yet a shadow of sadness veiled her heart. Her time in the realm was so brief. 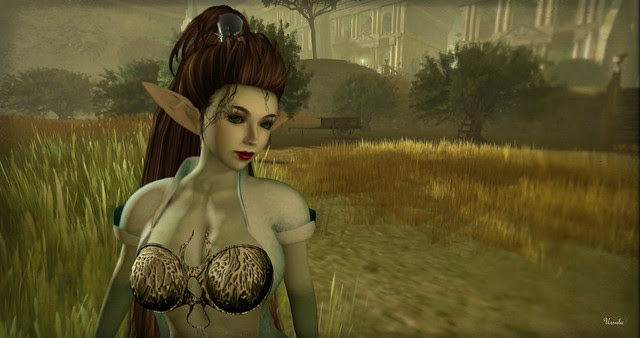 Indeed, she was to abdicate in a few weeks and her throne would pass to the Golden Queen... who, when her time came, would surrender the lands to the Red Queen and she, to the White Queen. The Green Queen was still sad, but when she remembered that the White Queen's reign would last but a few months and then she would ascend the throne in her full emerald glory again, she smiled and caressed another leaf. 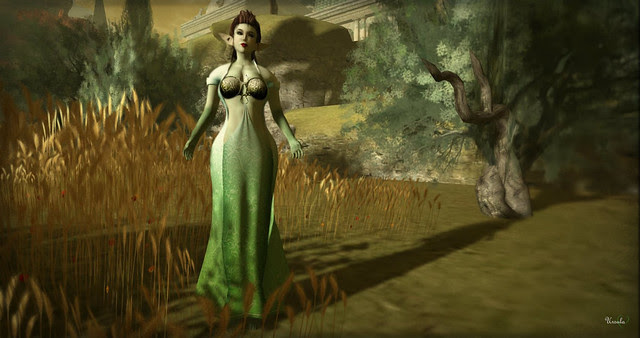 I've known of the existence of the two guys behind "22769" for quite a long time - I always pay attention when a friend, whose habits don't include showering anybody with easy compliments, speaks of someone in the highest terms possible. Alas, it also seemed that Paco Pooley and Manuel Ormidale would focus their attention mainly on modern clothing... well, they treated steampunk fans to some tidbits from their "22769 Vintage" series now and then, but that was all, as far as fantasy stuff went. Yet, a flicker of hope scintillated in the horizon... Paco and Manuel wear elf ears, together with their jeans and t-shirts and sneakers! And indeed, the call of the pointy ears has proven too strong to ignore, and this year 22769 have their store in the Fantasy Faire, filled with goodies for the fantasy folk to enjoy.
... and you two, you will continue the vintage line, will you...? Pretty please?

Outfit: "Queensdress" in Green by 22769 - FF exclusive (160 L$) that you can find in Paco and Manuel's store at Lumenaria.
Hair: "Poison" by EMO-tions in Brown - the hair is a "golden oldie" (245 L$) but you can find the latest creations of Mirja Mills at Evensong Woods during the Faire.
Ears: "Young Elven Ears" by 22769 - another FF exclusive (140 L$) which is a bargain as the ears come with a colour HUD so you can match the shade of your ears with any possible skin you have.
Skin: "Rainbow Skins" in "Corpse Pallor" by Grim Bros - you can pick up the gift package for free in the Grim Bros main shop and it indeed contains many skins in the colours of the rainbow, and some. Cutea Benelli is also present at the Faire, go visit her boot at Ravenshard.
Tattoos: "Demon Fades" in Cilantro (on hands) and "Soul Ink Reloaded - Jana" (around the eyes) - both by The Plastik. The tattoos are both previous hunt gifts (now available for 249 L$ and 89 L$ respectively) but Aikea Rieko has new creations to offer, so go and visit her store at the Fantasy Faire at Evensong Woods, and don't forget to pick up the two low lag avie gift packages, also by The Plastik, at the landing point.
Eyes: "Komodo Eyes" in "WisdomSage" by Sterling Artistry - this beauty is also a FF exclusive (85 L$) that you can find in Silverr's shop in Titans' Hollow.
Posted by Ursula Floresby at 2:03 PM