She had started to use the black needles a year ago. They were a gift a strange guy had given her. He had told her that she would become more and more beautiful when using them daily. And indeed her skin became softer and somehow her body changed. Not much but on a way which was attracting for men and women around her. And this changed her character. She became arrogant, annoying and just horrible. The black needles worked well. After a while she even started to wear the necklace he had given to her. She had to hurt herself to wear it but that was a fair price in her opinion.

Fishy Strawbery has a valentines sale. I really liked the black lingerie and after some male help i decided to buy it. Sometimes i like things but be not sure so i need friends to have a look to help me decide. Actually Storm sent me to the sale and Omen helped me to decide. The set consists out of a corset, undies and stockings. All parts come in a lot of versions. There are two parts of stockings, it could be worn with or without suspenders and there are many layers included. The black needles are an other item from a:s:s deluxe. They are very pretty in my opinion and the right item for letting the evil slowly drain into your rp character. 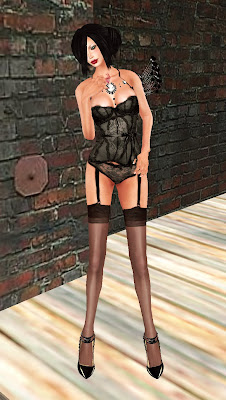